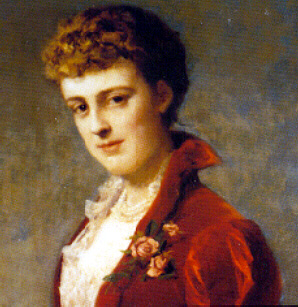 Edith Wharton can by no means induce her husband to appreciate the cathedral correctly. He is deaf to her definitive descriptions; blind to her silk-gloved pointing. Teddy is a grown man with the sensibility of a house fly. If only he could see Amiens cathedral for what it is, beyond its massive perpendicularity. Anyone can see the perpendicularity. Even Teddy, squirming as if bound by restraints, as if condemned by unjust decree to consider this masterwork of human achievement, even he can see the perpendicularity. It’s the magnificent irrelevance of the friezes Edith that yearns for her husband to grasp.

“Tell me you see the generosity inherent in their unwarranted frivolity,” Edith pleads. She’s putting it as plainly as she can. “The pictures of fairy tales carved into the entablature – they’re there to entertain peasants to whom the ritual itself has become unintelligible.”

She may as well be speaking Latin, to which Teddy as a Harvard man ought to be savvy; however, her husband is not the hale fellow she married, but rather a cringing simulacrum. The chauffeur coughs, once, and their traveling companion, Webster Hewitt, one of the better New York Hewitts, belatedly kicks in, “Oh yes, Edith, fairy tales, utterly beyond charming. I daresay you may have a children’s book in you yet, I’m sure it would be utterly beyond instructive.”

Edith gives Webster a withering look, then gazes off into a countryside soon to be withered by World War I. While she is thus distracted, Teddy elbows Webster, who obliges discreetly with his flask. This is the last stop on Edith and Teddy’s last tour of the continent by motor-car. She, a woman who turns everything around her into exquisite prose, has for a husband an irresurrectable dead weight. They have all of France at their disposal and all of Italy and Switzerland besides, but there is no villa opulent enough, no lake vast and glassy enough to assuage the man she married. What is Edith to do?

Lately I have been re-reading “Cathedral,” Raymond Carver’s story about a couple visited by the wife’s dear friend, a recently widowed blind man. My friend Amber wrote an essay about how Carver’s editor, Gordon Lish, vastly improved Carver’s best-known stories, not just with editorial deftness but by actually re-writing major sections. Amber wishes someone would do her the same favor, and so do I. In fact, my daughter did do me a favor like that in talking about this very essay, and I’ll get to that later, but first, let me tell you about one particular detail I noticed in re-reading “Cathedral.”

Dinner’s over. The narrator, the wife and the blind man have had plentiful drinks -- a high tide of drinks -- and they’ve passed around a joint. The wife conks out. A documentary about cathedrals comes on the TV. The narrator tries to describe cathedrals in words to the blind man, but he can’t. They talk it over as best they can, but it’s no use. They face a spiritual void. The blind man urges the husband to get out pen and paper so they can draw a cathedral together. Soon the blind man’s hand is riding the narrator’s and together they are scrawling flying buttresses, arches, gargoyles, everything they can possibly conjure to signify the meaning of a cathedral. The blind man tells the husband to close his eyes, and he does. That’s the part I had forgotten: how the narrator closes his eyes.

Something like that happened to me once. It was the summer of 1977. I was 16 years old, at the Texas-Oklahoma Federation of Temple Youth summer camp in Bruceville, Texas. The rabbi has us all sit in a circle on the floor, hold hands, go into a trance, and feel the presence of God. To get started, we sing a niggun, a melody with wordless lyrics. I could still sing it for you today, it was like the end of “Hey Jude.” We are na-na-na-naaaaaa’ing for 45 minutes straight, holding hands, swaying and swooping. I’m holding someone’s hand and I don’t even know whose hand it is. I don’t even know if it’s a boy or a girl, and while this uncertainty does cause me some anxiety, it’s such a rare moment that I manage to overcome it and just focus on the important thing, which is that the hand belongs to someone else who is also feeling the presence of God. I am so happy and relieved to know that God is actually right there with us. He feels like being dizzy without falling down, like having someone right there who would definitely catch you if you did fall, which you can’t because you’re already sitting on the floor.

Eventually I open my eyes and discover I’ve been holding hands with a curly-haired girl who usually wears a lot of lip gloss. She is a nice girl with a strange expression on her face. Her cheeks are flushed, her eyes wide, all the gloss is gone and her lips hover, as if her whole body is on the verge of producing the words to describe what we have just been through. We try. We say beautiful. We say amazing. We never hold hands again.

Edith Wharton holds hands with her dearest friend, Walter Berry, the love of her life, the man she wishes she had married. He is the best-connected American lawyer in Paris, Edith’s adopted city, but Walter has just suffered a second, paralyzing, soon-to-be-fatal stroke. Nevertheless, they communicate using a special code. Edith asks Walter yes or no questions. If Walter holds tight, that means yes; if he pushes her hand away, that means no.

This reminds me of my father, who has lost his power of speech to a degenerative neuromuscular disease. I visited him over the summer, I get back to see him and my mom in New Jersey every few months. My father clenches his fist to signal no. The OK sign or thumbs up is yes. On this last trip, my dad also wrote out a message, letter by letter, using an iPad drawing app. I wrote down each letter my father drew and the message came out naming every member of our family, followed by, “I miss you.”

I have been afraid that part of my fascination with Edith Wharton had to do with my father’s illness. I wondered if his extreme disability made him a dead weight, like Edith’s husband. I have decided that the answer to that is no. My father, even in his illness, keeps teaching me about perseverance and dignity. And my mother teaches me about loyalty and devotion in the way she continues to care for him through their shared plight. While we’re on the subject of people who aren’t dead weights, let me risk protesting too much by sharing that I’m not in a dead weight situation with my wife. She and I do a splendid job of give and take. Give and take, back and forth, my wife and I are fine. It’s not the dead weight issue that keeps me glued to Edith Wharton, but it is something. I wish I really could go back in time and ask Edith herself what the fascination is.

For instance, if -- encompassed by a magical aura of compassion that makes the interruption socially acceptable -- I could barge in on that sad scene between her and her beloved, incapacitated Walter Berry, I would first have to gaze upon Edith in her full magnificence. The folds of her clothing – the satin, silk, and fur; the constellations of her buttons, her hat its own species of cunning avatar; everything gathered together, selected, rejected and recomposed until Edith felt herself done exactly right for the occasion of Visiting the Dying Friend. She is nothing if not proper; Edith is propriety itself. It will take me a while to adjust my eyes to her outward splendor before I can start to focus on her acumen.

It is rare in my experience that anyone can be both the center and circumference of a circle. How does Edith manage it? She grants me three questions, to be answered by either clutching my outstretched hand, or pulling it back to her bosom.

She pulls my hand to her bosom. Of course I feel the warmth there, and the longing. I have been feeling the warmth of Edith’s longing all summer long, and now summer is almost over. I am soon going to break up with Edith and start going out with Malcolm X. Edith is used to being left like this; her abandonment by the one torrid lover of her life, not gentlemanly Walter, but a ne’er-do-well proofreader who had dalliances with everyone from Henry James to a slew of opera singers – left Edith just as sad as anyone who has ever been jilted, only more able to write about it. Two questions left.

Edith Wharton clutches my hand ever closer. I feel her heart. It beats in semicolons. She says, “You can learn more about me from any sentence in any of my books than from re-reading all 763 pages of the biography or any of its reviews.”

She paused for a long interval; so long that, not wishing to keep his eyes on her shaded face, he had time to imprint on his mind the exact shape of her other hand, the one on her knee, and every detail of the three rings on her fourth and fifth fingers; among which, he noticed, a wedding ring did not appear (p. 91).

She lets go of my hand and looks away, leaving me with the memory of her fingers, like living granite.

My daughter Claire reads everything I’ve written up to the part about my father, which used to be where this essay ended. On a recycled brown napkin from the Venice Grind in Mar Vista, she writes, “It’s great the way Edith Wharton connects to your life. It’s like she’s your fairy godmother, watching over you across the century. But could you end on one last happy note? Maybe? Just for me?”

I think about it, and think about it. I must start lesson planning, the summer of Edith Wharton must end. But the question remains: why read the biography, such a massive tome, a real-time re-enactment, as my friend Joel calls it? There are two main answers:

Mark Gozonsky, an inner city high school English teacher, has recently published fiction in Two Hawks Quarterly, Switchback, Corium and The Furnace Review. His essay "Althrea Tells Me Gangs Mean Love" recently appeared in Indiana English and is forthcoming in the anthology What Teaching Means, coming in April from Rogue Teachers Press in Omaha. Another essay, "You There! Yes, You!" recently won first place in the California Association of Teachers of English annual essay contest. Mark lives in Los Angeles with his wife and daughters.