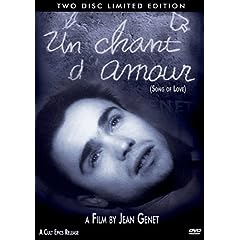 Long banned or heavily edited, this legendary transgressive short masterpiece is finally available in the States in its complete form. As the only film directed by poet, playwright, novelist, criminal and Saint Jean Genet, it naturally is saturated with images and emotions even his own overheated writing could rarely evoke. Un Chant D'Amour, first released to condemnation in France in 1950, is a dreamlike yet proud exploration of homosexuality and freedom, with both the body and the imagination as eternal vehicles for attaining that freedom.

Essentially this is a romance in hell. There are three characters. Two prisoners, in adjoining cells, alternately ignore one another and desperately try to connect. They try to swap flowers through the window; they blow cigarette smoke suggestively to each other through a glory hole in the wall. When not obsessed and aching for the other’s body, the men obsess over their own. Masturbation and fantasy are here acts of defiance and salvation. A later fantasy sequence still doesn’t establish that they were lovers prior to incarceration—maybe they have entered each other’s dream, or have come to share a single hope.

The third character is the prison guard, alternately voyeur and tormenter, yet always a self-hater. His shame and cowardice is exposed by the freedom with which the inmates express their sexuality; though caged, they are more liberated than he. His anguished, torn nature symbolizes many of the conflicts explored in the film: the prison as house of passion and pain; the secret as public; tenderness/brutality; tension and release, etc. his impotence is made manifest in one of the most famous scenes in underground cinema, in which he slowly inserts his pistol into a prisoner’s mouth, using his authority to act in a way his body will not or cannot.

While it has mostly been a movie more read about rather than actually seen unless in shredded form, Un Chant D'Amour certainly played a heavy role in the visual vocabulary of directors like Guy Maddin, early Todd Haynes (whose Poison referenced this film explicitly), and even the early ugly beauty of David Lynch. On the flip side, Genet owns quite a bit of stylistic props to that other defiant Gallic polymath, Jean Cocteau; the haunting, soft, poetic lighting and reliance on the small gesture in Cocteau’s films Beauty and The Beast and Blood of a Poet certainly influenced Genet here. It is a stunning, raw, uncomfortable visual message, one that has love and passion, the universal drives, as its core.
The DVD also comes with a documentary on Genet by Antoine Bourseiller, as well as an audio commentary feature by Kenneth Anger. The documentary, shot during Genet’s last days, finds him as defiant and holy as ever. The DVD is available from Cult Epics.