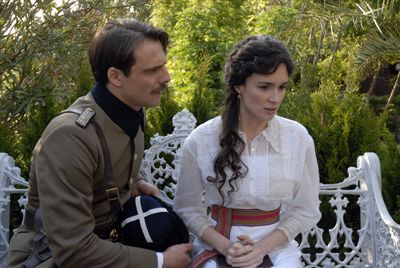 Few filmmakers have been willing to focus a narrative feature on the 1915 genocide of the Armenians by the Ottoman Turkish military, and it is a shame that the Italian directors Paolo and Vittorio Taviani have dared to venture into this hot button area with an extremely uneven melodrama.

The first half of the film feels like a variation of “The Garden of the Finzi-Continis,” with a wealthy Armenian family not realizing the growing danger that encircles their privileged existence. Tragedy shows up at the halfway mark, with Turkish soldiers slaughtering the Armenian males and forcing the women into an excruciating march into the desert. Running parallel to their plight are efforts to rescue the remaining women, with help coming in a ragtag collection of sympathetic Turkish beggars, an indefatigable Greek woman who once worked for the wealthy family, and funding smuggled into the country with the help of Spanish diplomats.

While The Lark Farm is punctuated with moments of harrowing tragedy – most notably in a scene where Turkish troops force a mother to murder her newborn son – the film gets weighed down by soapy subplots involving Paz Vega as an Armenian beauty who somehow winds up romantically linked to two Turkish soldiers. The film’s cast involves a number of actors from different countries, and the attempt to unify the soundtrack with Italian dubbing isn’t always successful.

Nonetheless, credit should be given for putting a long overdue spotlight on this atrocious chapter of 20th century history.