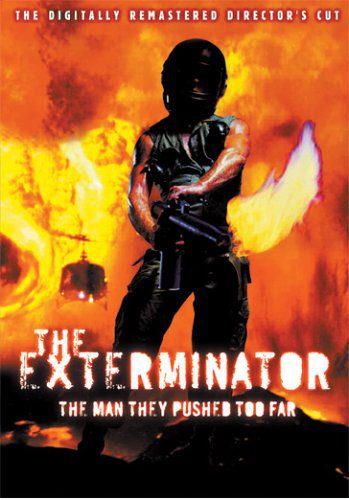 One of the first exploitation films to be shown endlessly during the early days of cable, 1980’s The Exterminator is also one of the more grim entries in the genre. Gory, jaded and ambivalent on the merits of the vigilante, it anticipated Bernard Goetz by a few years. Though it clearly borrows a lot from earlier revenge movies like Death Wish and Ms. 45, The Exterminator remains memorable and, with this new cleaned up Blue Ray/DVD package from Synapse Films, is visually impressive in ways that were impossible to create at the time.

Originally rated X for violence, the film’s plot revolves around Vietnam vet John Eastland, played by the late Robert Ginty (of Black Sheep Squadron fame), who returns home with his best friend, Michael Jefferson (played by Steve James). Both escaped a brutal capture by the Viet Kong, an experience that included seeing (and we see it up close and personal too) one of their fellow soldiers beheaded with a sword. It is Jefferson who breaks his bonds first and saves everyone, so Eastland feels a deeply felt gratitude to his friend. His concern for and attention to Jefferson’s family is believable and touching. They both find work at a dockside meat packing plant, once that pays protection to the mob and attracts many a denizen of New York’s seedy side.

After Jefferson and Eastland break up a beer robbery on the docks by the Ghetto Ghouls (a Gang that looks more like rejects from the Solid Gold Dancers than intimidating punks), they are targets of retaliation. Jefferson is brutally attacked the next day by the gang in retaliation (complete with a garden hand rake to the back), lapsing into a coma, and leaving Eastland to break the horrible news to Jefferson’s family. Almost immediately, Eastland sets about to avenge the attack. Quickly (& with little transition) he captures, ties up and threatens a lower level Ghoul with a flame thrower. Eastland heads over to the Ghouls clubhouse with his trusty M-16, which he uses to gun down a couple of the gang members. Ginty is believable as the vigilante: not superhuman or cooly resolved, but just a pissed off guy who wants to fuck up the guys who hurt his friend. Though he shows no remorse, there is a hesitant humanity to his actions that help set this film apart from the typical “crazed Vet” theme of the period. He knows what he is doing, doesn’t like it but does it anyway.

As Eastland gets a taste for wiping out the scum of the city, he decides to become a full-blown anti-hero, sending letters to the Times that make his case as someone sick of waiting for government and police to make the streets safe. A subplot or two takes over from there. Both the Mafia and the CIA are interested in making The Exterminator (as Eastland now calls himself in the letters) go away (he is an threat to lucrative businesses to the former, and a problem in an election year for the latter). Veteran horror B move vets Christopher George and Samantha Eggar—the latter in a typically cold, weirdly semi-sexy role) appear as the cop assigned to the case and the nurse tending to one of Eastland’s more colorful victims, respectively. The scene where a Mob boss is dropped into an industrial meat grinder is a classic of gruesome black humor; not even super nurse Eggar’s efforts can save him.

Eastland expands his hunting ground to include the pervs in Times Square. A prostitute who was disfigured by a sex shop owner (Tony DiBenedetto, listed in the credits as “Chicken Pimp”) specializing in procuring boys under ten for politicians (imagine that going on a block or so from the TRL set!). A clever ruse, some matches and a soldering iron help Eastland right the wrong.

It is an election year, and by this time both the NYPD and the CIA (and certainly in the late 70s the agency was often portrayed as evil incarnate) are interested in the Exterminator’s growing legend, but that doesn’t stop him from wasting yet another couple of Ghouls, this time in a spectacular car-motorcycle chase. Any more of a recap will spoil the ending, which features a couple of surprising moments, especially one between Ginty and George that is surprisingly emotional.

The restored print is stunning. The HD video is so clear it looks like 3D, and it doesn’t seem possible that this film is thirty years old. The reissue comes with a restored soundtrack, TV and movie preview spots, and an in depth interview along with generous commentary by director James Glickenhaus. The Exterminator is a classic of its type, and this detailed and painstaking restoration is a fitting revival.