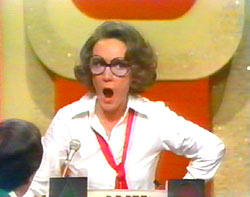 Unlike other classic 1970s TV games shows, the appeal of “Match Game” had more to do with comedy than competition. Quite frankly, no one tuned in to root for plucky contestants or to get caught up in the addictive nature of the game. Instead, the audience was hypnotized by the show’s offbeat personality – something akin to a slightly-out-of-control cocktail party full of wild innuendo-soaked humor.

“The Best of Match Game” offers 30 episodes from the daytime cult favorite, where a sextet of bawdy second-tier entertainers traded quips, insults and naughty punchlines. Gene Rayburn was the rambunctious host who barely kept the house in order – his observations on buxom physiques, smooching of pretty starlets and excess delight in setting up the smutty fill-in-the-blank questions added to the program’s adult party vibe.

In retrospect, it is astonishing that much of the show’s material was able to get past CBS censors – clearly, there were no other programs on daytime television during that era that provided such blatantly suggestive humor. (The notion of Ronald McDonald posing naked for Playgirl Magazine was actually among the tamer jokes!) If the show left very little to the imagination, it clearly offered plenty of attention to the funny bone.

Although the show occasionally attracted bona fide entertainment icons – Shelley Winters, Rita Moreno, Ethel Merman and Joan Collins made guest appearances – the majority of the “stars” were B- and even C-list talent barely known for supporting roles in television programs. Richard Dawson, Brett Somers and Charles Nelson Reilly were series regulars for the bulk of the show’s nine-year run, and their daffy insouciance spiced the show’s edgy humor. A rotating circle of semi-regulars including wild women Betty White and Fannie Flagg plus off-the-wall Patti Deutsch kept the arched-eyebrow humor flowing, while remaining panel seats inevitably went to performers whose stardom was fleeting in the 1970s and probably unknown today to anyone under 40. (JoAnn Pflug? Bart Braverman? Scoey Mitchell? Elaine Joyce?)

This DVD’s special features include extended interviews with Brett Somers taped before her death in 2007, plus a rare kinescope of the pilot of the show’s long-forgotten 1960s forerunner, a more sedate Q&A quiz known as “The Match Game.”

For those who survived the 1970s intact, or for those who weren’t around and have no clue why any mention of that decade still raises smirks, this DVD is a godsend. And no matter how many times you watch it, there is no way to get away from giggling over the likes of Gene Rayburn’s comically insinuating reading of lines like, “Did you catch a glimpse of that girl on the corner? She has the world's biggest – blank!”