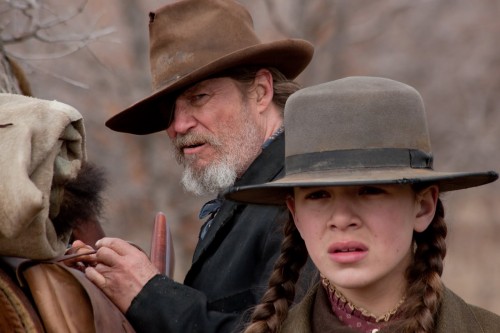 In his original review of Raising Arizona, Roger Ebert describes Nicolas Cage's character as having graduated from the “Rooster Cogburn school of elocution.” Even though the critic loved the original film of True Grit, he wasn't championing Arizona, which he thought to be artificial and distracting in its language. How ironic for him to see the same filmmaking team going to the source, by adapting the novel that offered John Wayne all those trademark lines.

The trailers and TV spots suggest the Coens' True Grit to be darker than the 1968 source novel and 1969 film adaptation. But the ads cast an illusion of bloody revenge. Perhaps fearing box-office indifference to westerns, those cunning promotional editors casted Chigurh's shadow behind a gravel-mouthed Jeff Bridges, as Rooster Cogburn.

His introduction in the actual film is hardly sinister – we first meet him in an outhouse. In a comical moment, Mattie – the 14-year-old out to avenge her father's murder – knocks on the door to request his services. Rooster hardly warms up to her, while he struggles to make do with the bare necessities. It was a dirty business to survive in the 19th century frontier, especially for this US Marshall living off whiskey in the back of a Chinese eatery. Cogburn has hardened not from trying to embody heroism, but from living alone in a milieu when family and community was one's only hope.

The new True Grit depicts both bandits and avengers as victims to this truth. John Wayne's Rooster is past his prime, but his heart of gold shows through his gruffness. For Bridges', weariness overwhelms what was long ago a lawman's determination. Needing him to hunt her father's killer, Mattie (played by Hailee Steinfeld, Oscar nominee and a godsend to the production) wins over Rooster with her willpower. When Rooster's pride eventually shines for the girl, it barely registers through his worn face.

The villains' motivations register just as murky. When Mattie finally spots her man, Tom Chaney (played by Josh Brolin), viewers at first recall the Coens' Llewelyn Moss, who chases the “man of action's” credo with hardly the footing for it. By Tom's first line, we know he's a misfit, one whom a struggling community would deem a social undesirable. He speaks in strained, unintelligible words, which shows that crime may have been the best of many bad avenues. After recognizing Mattie without anger, he takes her captive for assurance. He's the underling in the gang led by Lucky Ned (Barry Pepper), a pitiful rendition of a mercenary boss. So rotten are his teeth they're ready to drop right out of his head; when he calls out demands, his spittle could get more attention than his words. Faithful to the novel, the Coens frame the tale as a backstory of the aged Mattie. The novel's dispassionate view of violence – as crime writer George Pelecanos has described it – shows her not mythologizing the conflicts, and the Coens follow suit. Though Cogburn has his share of tall tales, Mattie's telling reveals character more than villainy or vengeance.

Many recent films have brought historical verity to narratives clouded in myth. A prime example is David Fincher's Zodiac, which highlights the complications of the actual case to dismantle our glorification of serial killers. Yet, like that film, True Grit delivers genre's undercurrents that movie lovers expect. The film makes fine use of locations: the archetypal peak used in westerns from Anthony Mann's The Naked Spur through George Miller's The Road Warrior (aka Mad Max 2) and beyond; and the wide expanse, in which Bridge's Rooster also tells that sonofabitch to fill his hands. For the Coens the title refers to the trait Mattie needs in her avenger, though the film sympathizes with the criminal outcasts.

The title “The Fighter” recalls the old-time warrior weepie genre, while capitalizing on the similarly titled 2008 hit, The Wrestler. The latter film features a battler whose life can't go past the mat. His final tragedy occurs once he's failed on the outside, and his body begins to fail him. The new film features a boxer trying to renegotiate his life in respect to the ring. The fighter rebuilds through family, while the wrestler learns he's no damn good to it.

The fighter motif is ready-made for cinema, with its built-in conflict: a series matches leading to a final one. It becomes drama when the battles of life compliment the ones in the ring. Filmmaker David O. Russell is combative in many senses, in his direction of actors and his visual style. The comedy in his Flirting with Disaster (1996) arises from irony of situation. He doesn't resort to verbal jests but characters who collide in bad situations, as does Lisa Cholodenko's in her 2010 triumph The Kids are All Right. In Russell's The Fighter, the conflict grows as a legacy fades. He must be saved for his family to survive.

The legacy is Dicky (Oscar winner Christian Bale), the real life “pride of Lowell” (Mass.) whose best days are behind him. He lives in his hometown, the only place where his celebrity survives. A documentary crew makes a film within the film; to Dicky it documents his return to the ring, though we realize it's an inside look on crack addiction long before he accepts it as such. His behavior seems too prodigal for him to be “lost then found.” That his younger brother, Micky (Mark Walhberg), is making his own return to the ring adds valor to the crazed Dicky. The brother theme has reflected human nature's duality since Cain and Abel, with the brighter half needing to manage the darker, less the latter overtake the other. Dicky, when not getting high, lives to train Micky, a reliance their family won't let falter. When Micky begins dating Charlene (Amy Adams), a local bartender with her own demons, she encourages him to break from the family, which summons the fury of a codependent clan.

Panicked to finance Micky's training – another manager has offered his services – Dicky has his girlfriend lure tricks on the street. He impersonates police to rob them, and gets nabbed by the cops. Though Micky moves to new management, he uses Dicky's advice to pull off a long-shot victory. Since the prison forbids boxing on the TV, Dicky listens to his mother's commentary over the phone. This “surprising” turn, too familiar from countless boxing films, depicts a bond so strong that we can't feel it sappy – it transforms to pathos. The darker brother can be (partially) redeemed, a nice touch if hardly universal.

To make his role as disturbing as it is likable, Bale gives an impressionist performance, unusual for a biopic outside Werner Herzog. (Hence Bale worked so well in the director's Rescue Dawn.) With an energy reading as Type-A obscured by crack, Bale nearly upstages the actors around him. They work in a more natural style, especially Wahlberg, who looks for nuance in Bale's shadow. The former, familiar to biopics, must work in strange territory, as he did in Russell's I [Heart] Huckabees. To keep the old glory alive, Dicky “performs” all the time to Lowell residents, hitting their high fives and urging their motivation. Regretfully, his character loses depth: we see Bale himself working the streets, not the man he is playing.

Yet Bale soon collects his emotion as the film requires, and eventually starts to absorb his role. In lieu of distracting viewers, he leads us to the high points in this melodrama. As Charlene, Adams presents innocence that has fallen, as she did in the breezy Sunshine Cleaning (2008). The family opposes her as they root for their boys, with Oscar winner Melissa Leo playing the kind of mother so doting she meets all opposition with rage. (Though realistic, a pack of blonde sisters aren't more than annoying harpies.) The father, with his hands full, is willing to let Micky go, though the family must prevail. Though grating at time, theirs is a fight with which we can sympathize. Russell delivers what we least expect from him: a pro-family film.