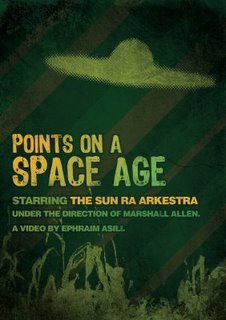 Maybe the old bit about a prophet not being accepted in his own land could have been upended if the prophets had had decent musical chops. A hip sense of rhythm might make prophecy go down easier. At least that proved to the case with Sun Ra. Sun Ra and his Arkestra were more than an adventurous big band that from the 1950s on used space motifs with a blend of free jazz and bop to create some of the most mystical jazz. Of course there were many who couldn’t see past some of the trimmings of the band’s image—the costumes, the Space Age fixation and, most of all, Ra’s own claims of extraterrestrial origin. As is clear from this documentary, the remnants of the band show that they take the message quite seriously. The Arkestra was and is a way of life as well as a long term gig.

Directed by Ephrahaim Asili, who discovered the band for the first time in Philadephia in 1998—as the band left a festival stage during a rain shower to lead the crowd in an impromtu parade—Points on a Space Age is a 60-minute doc along the lines of the talking-head-intercut-with performance clips style. This works because of the interesting and passionate nature of the images of the band as well as of the audio, as the band attempts to articulate what Ra meant to them, and why they are keeping the flame alive. He “left the earth” for his next mission in 1993.
The remnants of the band include Marshall Allen, Ra’s greatest discliple as well as current bandleader and keeper of the flame. Now 86, Allen also serves as recruiter for new members, and potential converts of Sun Ra’s philosophy, once based on space travel and music as a tool for evolution into a new consciousness and tuning into holy vibrations.

The film follows the band as it rehearses, and plays small gigs in school auditoriums for what seems like family and friends. The intimacy of the shows are a nice contrast to the expansive, and at times outrageous, aura surrounding the band. The flowing teflon robes and Captain Video helmets are as outre as they were in 1959, though they may have lost a bit of visual value. Interviews with various members—unnamed in the film—serve to illustrate their commitment to the music and how Ra’s philosophy has guided their life. This is no joke: the members of the band are convinced they are on a spiritual quest, and they trust completely in instruments and in their guide.

The influence of Sun Ra is hard to calculate. He was there when some jazz musicians were beginning to drift off into tangents that embraced improvisation and the use of the music itself as a religious tool. There are echoes of Ra in late 60s Coltrane as well as in that era’s early Free Jazz players. Points on a Space Age does not ask Allen about the early days, and the band members interviewed talk more on how the experience effected them personally, rather than historically. The film does not place the band in a context that helps the viewer see any progression of Ra’s ideas. There are short vintage clips, but a quick scan of the web reveals a treasure trove of classic Arkestra footage. More here might have bene helpful. Overall, the film does a good job of showing not only the talent, but the friendship and solidarity of the band; old and new members clearly feel a part of some cosmic event whose power is still ongoing. Newcomers to the music and philosophy of Sun Ra and His Arkestra might need to fill in the gaps in their knowledge, but the film will surely give many the inspiration to do so.