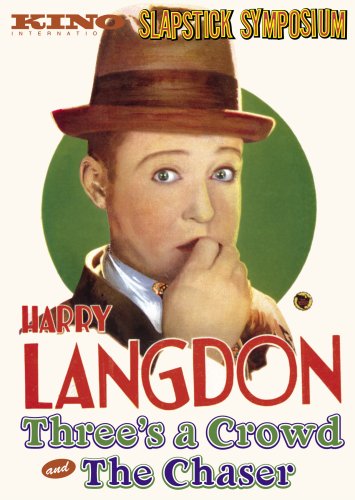 Harry Langdon will be forever stuck in fourth place in the canon of silent film comics, always trailing Chaplin, Keaton, and Lloyd. Still, he endures, his childlike, slightly sad face and his eye for the slightly perverse never losing their power.

This Kino set collects the first two films he directed, two gems that, ironically, failed at the box office and helped begin a career slide from which he never recovered. To view them today is to be puzzled as to why they did so poorly. Maybe, given that they were released in 1927 and 1928 respectively, a nation in the onset of Depression was not interested in the gentle melancholy of Three's a Crowd or The Chaser.

In Three's a Crowd, Langdon's directorial debut, he plays a bumbling employee of a moving company who can't seem to get anything right. He lives in a shack on top of an apartment building in a run-down neighborhood, and the only access to his room is an insanely long, warped staircase aside the building. He longs for a wife and family, and his boss' wife takes pity on him. One day during a snowstorm he takes in a freezing pregnant woman (Gladys McConnell) who has just left her drunken husband. Langdon nurses her and rallies the neighborhood women to help birth the child. A neighborhood palm reader tells him his troubles are over and the he will win her heart.

As he helps the young mother and child gain strength, it seems that Harry indeed has found true love. And the woman herself comes to love him as well, to the point where, when the penitent husband returns, she wants to stay with Harry -- provided he win a boxing match against the husband. He loses, and the winner eventually collects his prize, a reunion for which Harry has a front row seat.

There are a couple moments of heartbreaking genius at the end of the film. As the woman is embracing her husband before they leave Langdon's apartment, he watches them, puzzled, resigned. He does a double take look at his left hand, suddenly remembering his "fortune." As they leave, and she with her coat over her shoulders, he gently reaches out and grabs an empty sleeve, and shakes it briefly. There is so much power and humanity in those gestures to fuel a hundred films. Now alone, he walks through the neighborhood, a brick in his hand. He stands in front of the palm reader's window, trying to gain the nerve to toss it through. He wimps out, though, and as he tosses the brick away he sets off a chain reaction that causes a huge barrel to crash into the shop and destroy it.

Just as innovative, 1928's The Chaser was daring for its time. Langdon is a night owl whose carousing ways piss off his wife and her shrewish mother to the point that they take him to court for trying to stab the mother (he actually brushed her in the ass with a sword while hiding under a table). The judge sentences him to live one month with the roles of himself and his wife reversed, or face prison time.

When next we see Langdon, he is in house frock behind the house, trying to coax an egg from one of the hens for breakfast for his impatient -- and professionally dressed -- wife. Given the times, the censors would not permit a woman to wear pants, so she has a skirt below her jacket and tie. She leaves for "work," at a social club for women, while he is left to fight off amorous salesmen -- two of whom kiss Langdon on the way out.

There is also a veiled allusion to impotence, as a salesman comes to collect a bill for a baby carriage. After consulting with his wife on the phone, he tells the salesman to take it away -- they won't be needing it. In a fit despair over his fate, he contemplates killing himself, but neither a gun (the one he shoots is a water pistol) or poison (he drinks castor oil instead of the glass of poison next to it) work, so he decides to rebel and go golfing with a friend.

They come upon a group of girls in bathing suits frolicking with beach balls. Through either fear of his wife or a sense of duty to her, he returns home. His wife returns home in the meantime and finds the suicide note and the messy kitchen, and though she thinks he has killed himself, her mother convinces her to drive around looking for him. They eventually return, to be met by a ghost -- the flour-covered Langdon. They tentatively embrace, with Langdon's skewed smile implying an enjoyment both of the reunion and of having scared her.

These two films show an artist at peak, willing to take chances, willing to expand the possibilities of his famous persona, willing to risk his audience by exploring new depths. Thus, Harry Langdon triumphs on all counts in these films. Despite their contribution to his career demise, they can be seen now as personal films with more heart and humanity than anything that has been at your local googolplex in years.

Three's a Crowd and The Chaser is available from Kino Video.