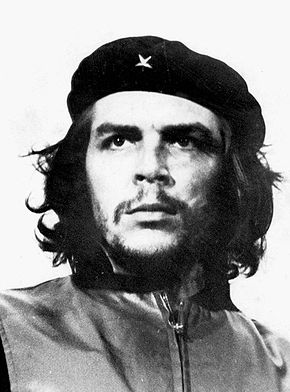 Luis Lopez and Trisha Ziff’s documentary Chevolution focuses on what might be the single most famous photographic portrait of the 20th century: Alberto Korda’s image of the beret-wearing Ernesto “Che” Guevara.

The photograph itself was cropped down from a larger picture that showed Guevara at the 1960 memorial service for the victims of the La Coubre explosion. However, it was not published in the Cuban state-run media for over a year, and the outside world only first saw it in a 1965 edition of Paris-Match (no one is quite clear how it arrived at that high-profile magazine). Italian publisher Giangiacomo Feltrinelli created posters of the cropped image; Korda, a devoted Communist, initially waived copyright claims to the photograph but Feltrinelli happily claimed it for himself.

After Guevara’s death in 1967, the image was picked up around the world as a symbol of a great many movements and issues – most having nothing to do with Guevara’s distinctive brand of revolutionary Marxism. Korda’s estate eventually regained the copyright on the image, but only after millions of posters, t-shirts, postcards and parodies were created.

It is a fascinating story, to be certain, though it is a shame too much time is devoted to the often less-than-fascinating appropriation of the image (do we really need to see repeated views of a tattoo artist inking Guevara on a guy’s bare arm?) plus dullish input from people with little connection to the photograph’s history (including Sinn Fein leader Gerry Adams and actors Antonio Banderas and Gael Garcia Bernal).

But despite its padding, Chevolution is a genuinely interesting film about a photograph that still, after 50 years, continues to haunt and intrigue us.