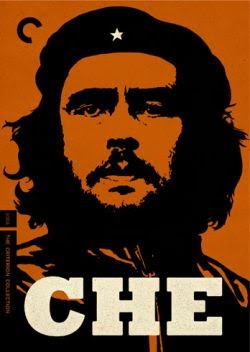 Steven Soderbergh is certainly one of the most intriguing directors of all time. He was, and continues to be, a pioneer of independent filmmaking, whilst simultaneously leading a double life as a successful mainstream filmmaker. He makes no apologies for either incarnation. He has no need to. It’s likely that most of the people buying tickets to the Oceans films have no idea that Che even exists. And he continues to feed his indie audience with challenging films that leave them little room to complain about selling out. Though it cost almost as much as one of his mainstream films, the $65 million Che is not your typical Hollywood biopic. There’s very little back-story, romance, and certainly no cheesy revelatory moments that spoon-feed the uninitiated as to how Ernesto “Che” Guevara came to be a face on dorm room walls. Instead, it gets right to the meat of the revolution, giving the reasons behind the t-shirt packaged rebellion without condoning or admonishing it. This is not an origin story. We’re just thrown into the action, seeing him do what made him famous.

The story is told in two parts. The first, titled “The Argentine,” deals principally with the behind-the-scenes of the Cuban Revolution, occasionally narrated by an interview that Guevara gave in New York in 1964 and inter-cut with a controversial speech he gave to the U.N. It’s an exciting, non-partisan look at a man who was considered a freedom-fighter by some and a murderer by others. Part two, entitled “Guerilla,” skips ahead several years to Che’s fall in Bolivia as he fails to rinse and repeat his Cuban success.

It’s a riveting film, but not exactly light viewing. I’m rarely convinced that any film needs to be over three hours long, even when broken into two parts. There were certainly moments where it could have been trimmed down. But it’s also incredibly focused. So much so that college professors from many different departments could make a case for the educational properties of this epic. Written from Che’s diaries and other factual source materials, it’s part war film, part history lesson, and part political treatise. “The Argentine”, in particular, is chock full of thoughtful dialogue about a thoughtful revolution.

Benicio Del Toro is astoundingly at ease in Guevara’s skin. During the black and white sequences, it practically feels like a documentary. And that is more to do with his performance than with Soderbergh’s hand-held camera.

It’s also with Del Toro’s performance that one gets the impression that with Che, what you see is what you get. He had no private life or dark secrets. The interviewer asks him what is the most important quality a revolutionary can possess. He responds “Love… Love of humanity, justice and truth.” That tells you everything you need to know about his motivations. You don’t see his private life because he forsook it for the cause. The Che on the posters was not a man; he was a revolutionary machine. He completely embodied the symbol that he became. And while that unwavering motivating contributed to his success in Cuba, it also leads to his failure and downfall in Bolivia.

At the start of “Guerilla,” Fidel Castro reads a letter from his M.I.A. colleague. “When people hate their government,” Che observes, “it’s not to hard to take a town.” Unfortunately, for his mission in Bolivia, there’s also the reverse. Che says, “In a real revolution, one either wins or dies.” The trouble is that he’s absolutely right. It recalls the computer in War Games. He was too driven by his mission. Therefore, he was programmed to fail.

Now you can absorb Che with the Criterion Collection DVD, presenting high-definition digital masters of the film on two discs with audio commentaries. The third disc includes a making-of documentary, interviews with historians and people who were actually part of the Cuban Revolution and the Bolivia campaign, a short piece about the camera used to shoot Che and documentary short, The End of the Revolution, which was filmed in Bolivia shortly after Che’s execution. After all that, you still won’t know Che’s favorite color or what he liked to eat for breakfast, but you’ll surely understand what he was all about.