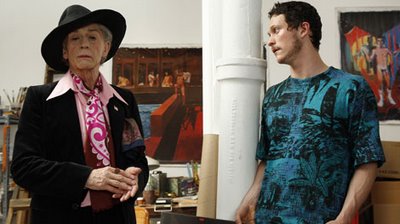 Quality roles for John Hurt must be at a severe minimum if the greatly underutilized actor needs to revisit his 1975 triumph as gay icon Quentin Crisp in “The Naked Civil Servant.”

This much-belated and wholly unnecessary sequel follows Crisp’s relocation to New York in the early 1980s, where he established himself as a writer and the star in a popular Off-Broadway one-man show. Crisp’s gift for witty observations and his peerless command of the language secure him a cult following, although his popularity declines when he unwisely responds to early warnings of the AIDS pandemic by dismissing it as a “fad.” Eventually, he re-establishes his popularity as a public speaker and theatrical raconteur, and he even snags a film role playing Queen Elizabeth I.

Anyone who is familiar with Crisp’s life story will immediately recognize that “An Englishman in New York” severely abbreviates his later years, cutting out many of his accomplishments while overemphasizing the notion that he spent most of his New York years as a pariah among the gay community. Making matters worse are supporting actors who either try to steal the show through overacting (Swoosie Kurtz plays literary agent Connie Clausen as if she was channeling Ann Savage’s “Detour” character) or who underplay to the point of enervation (particularly Jonathan Tucker, in is excessively wistful interpretation of the AIDS-doomed artist Patrick Angus).

As for Hurt, he seems fairly bored to revisit the Crisp character, and most of the time it appears to rely on his campy wardrobe and heavy make-up to do his acting. This results in making Crisp something of an aphorism-spouting bore, which eventually makes the film a pointless exercise.