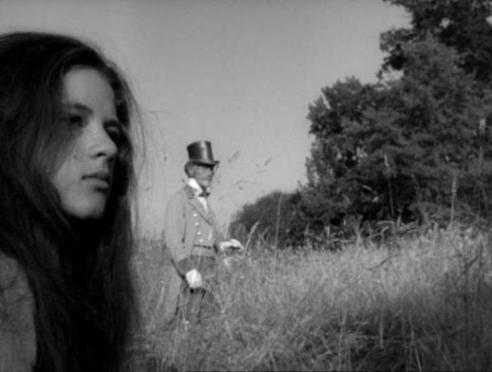 Timed for release in conjunction with the premiere of the latest Tim Burton film, this rarely seen 1966 BBC production from Jonathan Miller takes a radically different approach to the Lewis Carroll landmark.

The most significant aspect here is reinventing Wonderland as a warped parallel universe to Victorian England: the story unfolds amid drawing rooms and hallways of genteel shabby mansions while the novel’s zoomorphic characters are portrayed as the Victorians that Carroll was satirically mocking. Thus, Wonderland becomes the adult world of the late 19th century rather than a fanciful sphere of gabby animals. (Only the Cheshire Cat remains on four legs.)

Alice herself has also undergone a serious personality change – Anne Malilk portrays the girl as a surly observer who greets her bizarre adventures with an air of studied indifference.

While much of the Carroll text has been jettisoned to accommodate a tight 71-minute running time, the film’s surreal style compensates for the deletion of literary substance: deep-focus black-and-white cinematography by Dick Bush and a wonderfully incongruous sitar-heavy score by Ravi Shankar create an appropriately eccentric interpretation. A few star cameos offer amusing distractions, most notably Leo McKern in drag as the Duchess, John Gielgud dancing at the seashore as the nostalgic Mock Turtle and Peter Cook as the daffy Mad Hatter; Peter Sellers, strangely, is given very little to do as the doddering King of Hearts.

Special features on this DVD release include the only surviving print of Cecil Hepworth’s 1903 one-reel version of “Alice in Wonderland,” a documentary on how Miller and Shankar conceived the score for the film, and Dennis Potter’s 1965 biopic “Alice,” about the real-life inspiration for the title character, Alice Liddell.