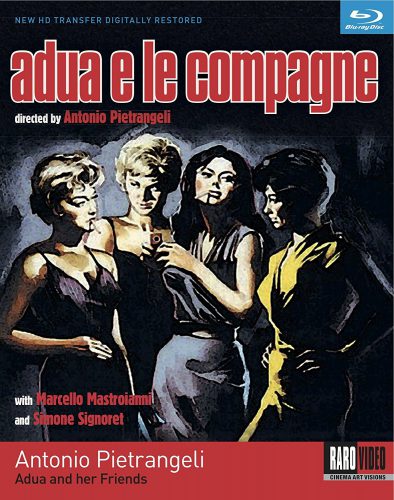 Antonio Pietrangeli's 1960 film Adua and Her Friends (Adua e le Compagne) explores the end of an era and points to future cultural upheaval. The story of four women looking to start a restaurant after the brothel where they were working was forced to close, features ideas and attitudes about women in a man’s world that would be directly confronted in the '60s and lead to social change. Pietrangeli’s women are strong, and the injustice done to them pulls no punches either. It is clear both that most of the men in the film see women as playthings, moneymakers or versions of their mothers, while the women, fully aware of that, share a bond of knowing that slowly builds into an outburst of frustration and budding autonomy. That the film ends with defeat does not change their heroism. It is a small triumph of a film that deserves a wider audience, as does Pietrangeli himself, an artful but gritty director often dwarfed by the directorial titans of Italian cinema.

In 1958, Italy’s government enacted the Merlin Law, which summarily ended the entire system of legalized brothels. Adua (Simone Signoret) and three of her co-workers pool their money and rent a small villa just outside Rome, perfect for a bucolic little restaurant. None have ever been in such business before, yet they can cook and are enjoying their entry into “respectable” society. Their naivety costs them dearly almost immediately. In order to get the necessary licenses (and to go around any potential legal problems given their past, the place their trust in the shady Dr. Ercoli (Claudio Gora). Ercoli wants a sizable return on his investment, and plans to have the girls turn tricks upstairs while using the restaurant downstairs as a front.

The realism of the film extends to the honest portrayal of the mixed feelings of the women. In many ways, they miss the life of the brothel, where the work was “easier,” and where they were looked at as more than harried waitresses. They resist the pressure to perform for Ercoli, but it is clear they felt more free as prostitutes than as businesswomen trapped by rent and the kitchen. Each of the women: the flighty Lolita (Sandra Milo), the laconic Marlina (Emmanuelle Riva), and the disturbed but oddly maternal Milly (Gena Rovere), in their own way attempt to exercise freedom in this new world.

A rabid suitor of Marilina at first seems to stand by her even when her past is revealed; in the end, though he was willing to accept her past in private, the publicity generated by the women’s falling out with Ercoli is too much for him: now everyone knows. Marilina’s attempt to trust opening her heart only furthers a bitter resignation about the folly of going straight.

More maddening is Pietro (Mastroianni), a sleazy used car salesman/hustler who initially falls for Adua, to the point where, against her knowledge of men, she opens her heart to him. Almost simultaneously, Pietro is working a couple other women on the side, one of which Adua sees in his bedroom window when she comes to see him for comfort over the fate of the restaurant. It is ironic that the only man who shows the women any respect with complete indifference to their past, is the local monk, who comes by for scraps for the pigs at the convent where he works. Milly attempts to cement respectability by bringing her young son to live with her at the restaurant. His initial fear and heartbreakingly gentle understanding of her erratic moods are the most powerful and human moments in the film; he perhaps symbolizes a more sensitive man to come.

Eventually the women can’t fight the odds stacked against them. They stand up to the Doctor and refuse to turn their restaurant into a brothel, but the law sides with him, given their “criminal” records. They return one final time to trash the place, but it is a Pyrrhic victory. Though only Adua is shown at the end of the film on the streets, showing signs of madness, it is assumed that all the women returned to prostitution. Given the depth of characterization and Pietrangeli’s creation of spacious scenes within which each character is given room to express themselves, it is a shame that we are not shown what happened to Lolita, Milly and Marilina; we have come to see many sides of them in their complexity, and to have them fade from the narrative seem unjust to viewers who have come to care for them.

Several members of the cast were at the height of their careers: Marcelo Mastroianni was fresh off La Dolce Vita, Signoret from the Oscar winning Room at the Top; Emmanuelle Riva would follow this film with a stunning performance in Hiroshima, mon Amour. Signoret also was recovering from the recent affair between her boyfriend Yves Montand and Marilyn Monroe. Surely that pain and anger fueled her portrayal of Adua, a woman trying to make it on the latent talents she knew she had, if only she could avoid placing her trust in men who would let her down or exploit her. Adua chose to trust despite her experiences, which is both her fault and unavoidable. Pietrangeli powerfully illustrates the bind of women for whom the search for love or independence seems tied to men, for whom women are unsure as to whether they will really offer love, or are just looking to get what they can. Adua and her Friends is a measured but gritty and realistic look at that emotional, and soon to be political, tightrope.