Have faith, or at least come to peace with the fact that some questions just won’t be answered in this lifetime. The good and the evil times occur simultaneously, so be good to one another. Those tired but true bromides are the core of most spiritual schools and, according to pop/religion columnist Cathleen Falsani, the subtext for the films of the Coen Brothers. In fact, The Dude Abides: The Gospel According to the Coen Brothers makes a mostly successful case for the brothers’ classic films as a treasure trove of teachable moments about the human condition both in its highest capabilities and lowest surrender to baser instincts. While not always successful—the basic structure of the book is problematic—this is a breezy, sometimes fun, sometimes wise, but always thought-provoking set of essays. 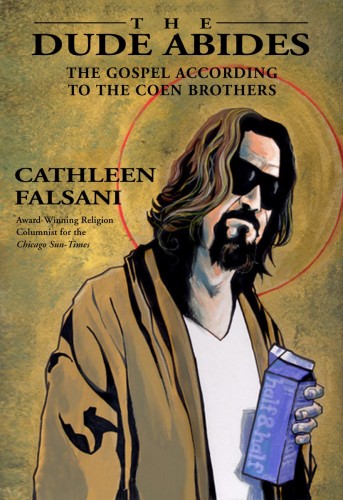 The book looks at each Coen film, both with a quick overview and a deeper reading. Each essay closes with Falsani’s thoughts on the “moral of the story.” This format grows tiresome, especially since it often seems as if too much time is spent on film summary than on development of her thesis. Her analysis is most effective regarding Barton Fink and No Country For Old Men; they provide the best grist for points.

Those two films are both at heart about the end of illusions—of hopes and trust in the former, and of the triumph of good and the hope for a basic sense of dignity to prevail in the latter. The title of the book, of course, refers to The Big Lebowski, and she does a commendable job of fitting it into her overall idea, but her summation of the spiritual point of the film (be kind to everyone, you never know who you may be talking to, essentially her summation of Oh, Brother, Where Art Thou? as well), along with the moral of Blood Simple (be honest, don’t commit adultery, etc), seem a bit obvious. Likewise, she stretches a bit when discussing Burn After Reading (we live according to our selfishness and not on the road map to salvation provided by the Bible, which we have existentially burned after reading) and The Man Who Wasn’t There (take chances; don’t be spectator in your own life). She seems to waver between illustrating the profound truths of the Coen Brothers’ films while at the same time suggesting that those profound truths are, while difficult to put into practice, are really simple when you think about it. And, perhaps sheepishly she avoids making a moral summation of Miller’s Crossing, since the Coens have refused to talk about its meaning and therefore it is best to leave it ambiguous. A deep reading and a stab at a moral would have been worth it, as that powerful film, it seems to me, expresses the heart of the Coen Brothers’ spiritual/moral/philosophical ideas: life is messy, sometimes cruel and deeply arbitrary, sometimes beautiful and funny and full of enough love to make the betrayals at least bearable. All those emotions may be brief, as are our lives, but if that is what we have to deal with, so be it.

She is at her best when that wavering is brought into sharp focus and those strains complement one another, as with Raising Arizona, where she rises to its ambiguity and offers some great insight. Her astute analysis of the film’s subtle commentary on childhood, as well as her judgment of Hi McDunnough (played by Nicholas Cage) as a prisoner of his fears and weakness in the face of his appetites, is moving as well as spot on.

In an old Zen story there is a monk who asks a master about the core of the teaching. The master replies that one ought to be kind, do good, and avoid doing bad. The monk, offended, shouts, “Is that it? Even a three year old knows that!” To which the master replies that while that is true, even an eighty year old has trouble living up to it. How you react to that story will spell your delight or dissatisfaction with The Dude Abides. There is even a 14-point Coen Commandments at the end that may or may not tie things together for you. She sums them up thus: “Life has many more questions than it has answers. But life isn’t about finding all the answers; it’s about the journey. So go forth in kindness, with an open mind, a pure heart, and a watchful eye for occasional divine intervention—particularly when you least expect or deserve it.”

But, rather than go forth herself, Falsani tacks on some odd addenda: a list of “group study questions,” which feels like a jarring implication of self-importance, and an essay on how online spirituality and communication have invigorated her spirituality. Aside from the internet and film being aspects of media, I can’t see the need for its inclusion here. In all, The Dude Abides reminds us that life lessons are present everywhere, even in movies that seem to have no morals or that play with them mischievously. Though sometimes her analysis is simplistic, many of our most lasting guides for living are also simple—on paper. The Coens challenge us to maneuver through ambiguity, through simple and complex questions, without ever comforting us with the idea that we have any help in our journey.

1 thought on “<em>The Dude Abides: The Gospel According to the Coen Brothers</em>”