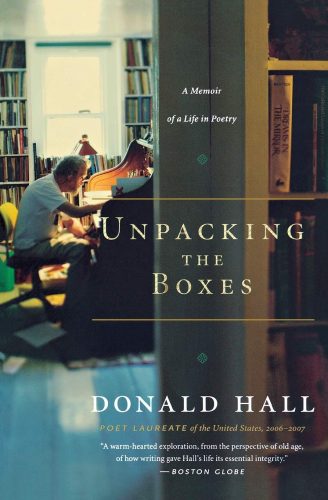 For more than fifty years, Donald Hall has had a two-sided career, his fifteen books of poetry matched by fifteen books of nonfiction. More than any other poet of his generation, he is known for clear, accessible verse, poems that--while never descending to the aw-shucks folksiness of a Billy Collins--treat their recurrent themes in lyrical, comprehensible, and, most important, emotionally laden imagery. His poems, importantly, sound like poems; the casual reader of poetry can approach them without fear, yet at the same time they reward sustained, knowledgeable attention.

Hall's nonfiction, which ranges from reviews to biographies to his most successful form, memoir, displays the same qualities: frankness, forthrightness, and an eye for memorable detail. His writing can teeter on the edge of nostalgia, but it is redeemed by his close focus on the real, physical qualities of the stuff of the world, conveyed in lines that--fiction or poetry the same--are forever attentive to the sound and rhythm of words.

Hall's newest book, Unpacking the Boxes: A Memoir of a Life in Poetry, in a sense fits around his most recent volume of memoir, The Best Day the Worst Day: Life with Jane Kenyon (2005), which, Hall acknowledges,

"...began as the middle of this memoir, but when my publishers read the whole manuscript, they realized that the midsection ought to be published by itself. They were right--but this book suffers from a hole in the middle."

Had Hall himself not chosen the word "suffers," I might have shied away from it--it seems an unfair tag for a book that has been damaged by such a wrenching loss--but it's true: Unpacking the Boxes, because it skips over almost the entirety of the most consequential relationship in Hall's life, feels frustratingly incomplete.

The book is at its best in its earliest pages, when Hall's poised descriptions conjure up the world of his 1930s boyhood. His Puritanical New Hampshire grandparents, for example, "were frightening figures to me--because they were frightening to my parents. Their house was always dark; it felt like held breath." His account of his mother's anorexia and depression, undiagnosed at the time, is moving and gentle; of his father's subsequent infidelity, understandable if not honorable, he writes with forgiveness. If there is a bit too much about childhood accomplishments--an essay contest for the American Legion is recounted at length--that dwelling on insignificance is more than made up for by Hall's eye for Depression-era detail: "Men with coal-stained faces treaded on each other's heels as they carried sacks of black anthracite on their backs and rumbled it down the chute into the coal bin."

But as Hall grows up, the narrative loses its drive. His undergraduate years at Harvard offer some moments of interest--primarily because of his remarkable group of classmates, who included John Ashbery, Adrienne Rich, Kenneth Koch, Frank O'Hara, and Robert Bly--but they also suffer from the fact that, good as Hall is at minutely describing a scene or a moment, he is not at heart a raconteur; at one point, he makes the confession, damning for a memoirist, that "When you call someone witty, it is hard to come up with an example that proves the point." The characters flit in and out, but overall they don't make quite the impression we would expect from this remarkable poetic generation.

Hall's postgraduate years pass in a sort of blur. Though there's an interesting account of the role he played, along with Robert Pack and Louis Simpson, in inadvertently drawing the battle lines between the Academic Poets and the Beats at the turn of the 1960s, his depiction of the development of his own poetry remains a bit flat. Meanwhile, on a more personal level, Hall's first marriage is little spoken of, while his second, more lasting marriage is mostly passed over, as I noted above. The book therefore always feels a bit betwixt-and-between: not quite about either the career or the life of a successful poet. When we reach his efforts to cope with the loss of Jane Kenyon, we ache along with him, but largely because we know the story from his earlier writing; his feverish, sad attempts to cope with his grief, while poignant, never take on the solidity or force of the fears and losses of his childhood.

None of this should obscure the fact that, for all the frustrations of the book, Donald Hall himself--as anyone who has read his nonfiction knows--is never less than charming company. Unpacking the Boxes is unquestionably a slight book, far less likely to last than his poetry or his more potent volumes of memoir--but it is unfailingly pleasant, like a good visit with a garrulous longtime friend. From a poet who's given so much over the decades, it seems churlish to be too disappointed at not getting more.

1 thought on “Donald Hall’s <em>Unpacking the Boxes: A Memoir of a Life in Poetry</em>”