Sadly, it's been a while for Alexander Payne.  Aside from a writing credit for a high-profile film (which is better left unnamed) and the pilot episode of Hung, the writer-director has stayed quiet since his triumphant 2004 character piece, Sideways.

Now that he's returned with The Descendants, The Philadephia Film Society will run a two-day retrospective of Payne's earlier films (on DVD), from the brilliant (and largely unseen) Citizen Ruth (1996) onward, at the Bossone Theater at Drexel University this weekend.  The event is free, with a $5 suggested donation to PFS.  Plus, attendees will receive a pass to a preview screening of The Descendants.  See the flyer below for more details. 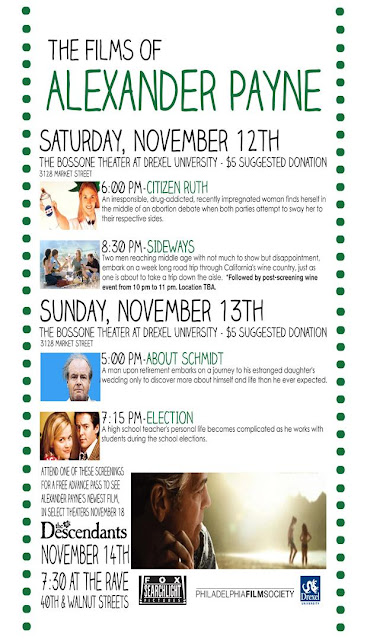