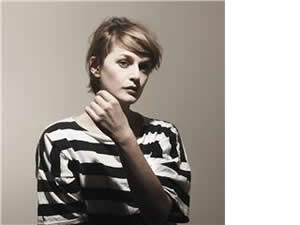 Sarah Assbring is a lovely Swedish songstress who records under the moniker El Perro del Mar. Her first album, self-titled and released in the US in 2006, showed a knack for simple hooks and nostalgic shoop-shoop vocals. Lyrically, the songs were heavy with melancholy and disappointment. This April finds a new album and new color scheme on From The Valley To The Stars

, which introduces synths and choirs, and contains songs about jubilation, studying clouds, and everything turning out all right. Both albums are beautiful in their own right and work as fine counterpoints to one another, perhaps each with a touch of irony. El Perro del Mar is returning to the US for an extensive tour with fellow Swedes Lykke Li and Anna Ternheim.

They’re definitely the focal point, or maybe rather the point from which everything starts. Certain words put together in a certain way really speak to me [emotionally], that they themselves carry harmonies or musical colors. It is very important that the words I do use (yes, I’m aware they’re not too many) are meaningful to me, that I mean them every time I repeat them, and that they have to match perfectly with the musical and instrumental coloration.

I used to find it difficult. The recording situation for me is completely within my power and control, my self-created world of sounds and harmony. The live situation is anything but that, and I used to almost find it disgusting and damaging for the music. I couldn’t really see the point in it, to be honest. But touring with my band and learning how to be a part of the organism which playing together with other people really is, I think I learned a lot and grew from that. And so I took that insight with me into the studio when I recorded the new album. Now I’m really excited to be playing and performing the new songs on stage. I mean, just to be there to see and hear what’s going to happen to them in a different environment is going to be beautiful and awesome.

I started out wanting to be a singer, first and foremost. I remember being amazed by Annie Lennox and Kate Bush as a kid. I was totally into their way of going in and out of different personalities, almost as a form of acting when singing. They often used subtle kinds of phrasing and other vocal techniques which I, to this day, still find very inspiring.

Finding and keeping the love of my life.

My dad, from very early on, used to play me his record collection and tell little anecdotes about different albums and musicians. Usually it was jazz and blues, and very often it was the kind of music I was too little to understand at the time, but I remember it opened whole new worlds to me every time I heard something new. He explained about musical coloration, intricate rhythms, and different ways of listening to and understanding music. I’m sure that gave me a key to being open to all kinds of music. He often spoke about the strong physical effects music had on him and I knew I could feel what he was talking about, like when he was referring to the way Dave Brubeck played a certain kind of tune on the piano or the strange piercing sounds Miles Davis got from his trumpet. He played me a lot of classical music as well, so I got into that from early on, too. All of that has been extremely important to me. I have this physical need for being around and making music, and I think I’ve had that inside of me from the very start.

I’m very much both, especially so on this album. I wanted to keep the innocence of a first-take recording so I tried [not to be too] self-critical. I usually work and record alone and try to be as organic as I can... I am a perfectionist, but on this album I really wanted to cut myself some slack.

The forest, a warm bed, and time on my own.

To travel across Africa.

Identity Theory's recommended listening: "People" and "From the Valley to the Stars" by El Perro del Mar