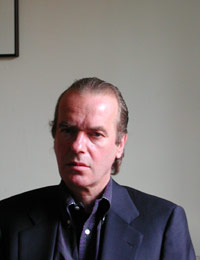 Recently I printed out a digital image I made of Martin
Amis at my most recent conversation with him. I showed it to my
friend Janice and her immediate reaction was that he was scary looking,
"He looks like a vampire," she opined. Michael, my other
friend who was also given a preview, agreed. I found this more shocking
than the reaction of Heather at the offices I use as the site of
my conversations. She was so excited and thrilled at meeting and
being in proximity to Marty that I thought I was going to be the
recipient of unsolicited but not unwelcome sexual lavishness. All
of which points to Amis as a kind of lightening rod of strong, uh,
reactions, an issue addressed in a
recent feature in the San Francisco Chronicle: "What
would the British press do if it didn't have Martin Amis to haul
through the gutter? Scorned as an intellectual snob and a child
of privilege -- his father was the author Kingsley Amis -- Amis
is having his worst year yet, with the publication of Yellow
Dog in August. A comic novel about dislocation, pornography,
male misbehavior and the British monarchy, Yellow Dog was
the subject of a spirited public mauling that was launched in August
by Tibor Fischer, a novelist whose newest work, not coincidentally,
was published on the same day as Yellow Dog."

As a side bar, Deirdre
Day-MacLeod spanks Fischer for with this rejoinder to his infamous
embargo breaking review of Yellow Dog, "I must admit
it's pretty difficult to review an Amis book to begin with, especially
if one is overly concerned with the opinion of fellow commuters
as you seem to be. Really, Tibor (the trend in these articles is
to use first names), perhaps you ought to do something about your
fear that other people on the train really care what you are reading
and that they are judging you for enjoying certain kinds of reading
matter. Even without the problem of reading while only thinking
about yourself, Amis is a hard one to look at with a clear head
and a reasonable eye. Even if he hasn't already been blasted by
some other British male writer with an eye on the Booker, Amis comes
as part of a larger literary narrative."

This is a view that in some sense echoes my own on Amis. He is
not easy to read —sometimes, not even fun to read. But as
in past encounters with both his writing and his person, I find
Amis worth paying attention to and certainly not to be taken lightly
or dismissively —which I think is the effect of the ad hominum
and self-serving fulminating that orbits him. And yes I think Yellow
Dog is worthwhile and engaging, and I don't see Marty as scary
looking.