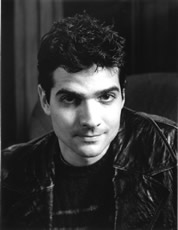 DJ Levien is the author of two novels -- Wormwood (1999) and Swagbelly (2003). Along with filmmaking partner Brian Koppelman, he has written several screenplays, including Rounders and Runaway Jury. In 2002, he teamed with Koppelman to write and direct the feature film Knockaround Guys. The pair also produced Interview with the Assassin. DJ's writing has appeared in Details, Esquire, Premiere and The Los Angeles Times, among others.

Levien's new novel, Swagbelly,
details the plight of Elliot Grubman, a Jewish pornographer worth
$100 million who struggles to attain respectability in the midst
of numerous social barriers and family complications.

DJ Levien graduated from the University of Michigan and lives in
Connecticut with his wife and young son.

In an Identity
Theory interview, Richard Price said that if
he didn't write screenplays, he couldn't afford to write books.
He also said of trying to write books and screenplays simultaneously,
"It's like trying to play baseball and softball. It seems deceptively
dissimilar. You are going to break something." As a screenwriter
and novelist, what are your thoughts on this? Do you view movies
as a way to support your novel writing?

I love "Ladies Man" by Richard Price...So far I have
not been one of the rare few who can make a real living as a novelist.
I have been fortunate to make a living writing movies, so it is
fair to say that one affords me the other. Though they are both
storytelling, fiction writing and screenwriting are indeed different
animals. Writing fiction is a most solitary pursuit. The entire
universe must live on the page, and I am, irrespective of editorial
suggestions, the final arbiter. Filmmaking, and the writing portion
by extension, is a more communal outing. Hundreds of people must
come together to bring the final effort to screen. The script is
a blueprint of the visuals, of the tone, of the acting to come.
In my case, as I write scripts with partner Brian Koppelman, the
collaboration begins right at the start. The reality is that the
producers, studio, and the audience to some degree, has real say
in certain aspects of the final product. Doing both--writing novels
and making films--fulfill different aspects of my creative voice.
One thing they have in common, though, is that true satisfaction
is fleeting, nearly impossible to grasp. There is a divide between
the intention, the vision at the start, and the limitations of the
finished work. I believe this is the case in writing, or art, of
any kind.

Of your works that I have seen and read (Rounders, Knockaround
Guys, Swagbelly), I've definitely noticed a certain feel, recurring
themes of awkward familial relationships and of course this conflict
between the straight life and the underworld life. I'm interested
in how your style came to be. What books and/or movies had an overriding
effect on your development as a writer? Is there a movie you watch
all the time for inspiration?

This is an apt distillation. I'm drawn to sub-cultures that have
a code, custom, and language of their own. Whether it is underground
poker, organized crime, the porn business, law, or soldiering, I
am interested in the rules of these insular worlds, and how they
mesh and gnash with the greater outside world. Uncomfortable familial
relationships, and conflict filled non-family relationships, are
a micro version of the same thing. Characters marked by core beliefs
that jibe with their environment, and the struggle over which will
win out, are common to my favorite work. Books by Hemingway, James
Salter, Paul Bowles, Cormac McCarthy, and films by the Coen brothers,
Scorcese, and Coppola have influenced and inspired me. There are
many others of course, but these seem most clear in regard to the
first part of the question.

A number of people have compared you to Philip Roth. How
does that sit with you?

It sits very well with me. And I'm sure Phil can rest easy now
too. Philip Roth has been a big influence on me. When I first read
his work in college, in addition to being fascinated, moved, and
laughing my ass off, I appreciated his boldness, his willingness
to drop the formality of subject and language that so much other
literature I'd been exposed to seemed to demand. He instead treated
the everyday, the sexual, the perverse as literary topics, and invested
them with importance that seemed truly modern, and had real resonance
for me.

You dabble in a lot of different areas, as a prose writer and screenwriter
and director and producer - and also as a father and a husband.
And I would imagine living in Connecticut, working in Hollywood,
and traveling to places like Montana for research requires a lot
of time away from home. What keeps you balanced?

Living outside of Los Angeles, although difficult to pull off at
times, has huge benefits for a writer/filmmaker. Living in CT, working
in Manhattan everyday, allows me to focus on the work more. All
day long I'm dealing with people whose only contact with the entertainment
business is going to the movies, and occasionally reading a book.
The effect of the entertainment business on those living in L.A.
is intense. It can have a warping effect. It becomes difficult to
not get caught up with the dealmaking you encounter on the front
page of Variety, in the restaurants all around you, walking
down the street--well no one even walks down the street, you end
up driving around and talking to your agent on the phone a lot in
L.A. The thing that allows me to keep it together when I'm on location
is my family. For years my wife, and now my son who just turned
one, have been able to travel with me. Spending whatever down time
I have, which isn't much during production, keeps me sane.

How long did it take you to write Swagbelly?

Years. I'm fast at writing a draft, but there is no substitute
for time when all is said and done. I wrote a first draft in six
or nine months. Then I wrote several other things before coming
back and working for many more months. I did this a few times over.
By the time the book was published it had taken years. I'd like
to envision a different, faster way, but sadly I can't.

In Swagbelly, Elliot Grubman is a pornographer
who is ostracized for his Judaism and the fact that he peddles smut.
Which do you think is a bigger stigma for him - his religion or
his occupation?

I can't size his stigma. One is either marked by something or not.
You're either inside the main or outside. If you're locked out of
a warm house during a snowstorm it doesn't matter if you're a mile
away or stuck right outside the door. There is practically a sub-culture
of rich and famous pornographers in the public eye today, men who
seem to really embrace their profession. My idea for Elliot was
'what if there was a man, a pornographer, who had some shame over
doing that which defined him?' As a young man who grew up poor,
a Jew, he felt like he was at the fringes of society, and maybe
he didn't think his choice of profession would bother him, only
to mature and realize he was wrong.

Fox's highly publicized (but rarely watched) drama, Skin,
was a lot like Swagbelly in the sense that it also featured
a rich Jewish pornographer as the seeming protagonist. Did you watch
it? If so, how would you compare Elliot Grubman to the pornographer
in Skin?

I'm sorry, I didn't get a chance to see Skin. I meant
to, and was interested, but it came and went pretty quickly. Obviously
this was the problem with the show for Fox.

Envisioning a town in which the town whore has a storefront right
next to the lawyer, the doctor, and the dry goods merchant is disturbing.
Can the whole world be like the red light district in Amsterdam?
I don't think so and I hope not. I don't have a moral problem with
porn made by and for consenting adults, although I do have sympathy
for those who end up in it by way of unhappy upbringings. But the
idea that it is kept in separate racks, in private rooms, in the
cordoned off section--I'm for that. It's part of the whole thing.
Who even wants it in the cappuccino bar of the book and video store?

One of the Swagbelly reviews mentioned Jack Nicholson
as an ideal actor to play Elliot Grubman. Do you agree with that
matchup? How would you cast the characters in this book?

Jack Nicholson would be great. There are several others who would
do well with the role. I don't want to cast it here, one day I'd
like to cast it for real.

I haven't seen Runaway Jury, but a number of people have
mentioned that the filmmakers changed Grisham's villain from Big
Tobacco to the gun lobby. As one of the screenwriters, can you give
some insight on why that change was made?

The movie came out well, you should go check it out. The change
to the gun lobby was made before I was aboard, but I was a fan of
the change. First of all, The Insider dealt with the power
and sinister nature of the tobacco lobby. Secondly, and more problematic,
verdicts against Big Tobacco had already been issued. The key to
the scam in the film working was choosing a lobby that has not previously
been ruled against. One that would be facing the can of worms being
opened for the first time. Gunmakers haven't been ruled against
yet, but it's within the realm of possibility, so it worked for
the movie. One can envision that they might be willing to go to
some lengths to protect their business.

Do you have a hand in any movies coming out soon? Is there another
book in the works that you want to talk about?

I've written on a few movies that are in production, but until
credits are determined, and until I've seen them, it's not something
to mention. I am in the midst of another book too, but I don't like
talking about them until they're finished. What a pain in the ass,
right? One project that I'm excited about is a script that Brian
and I literally just finished--The Storm Returns. It's
a mythic urban war movie that we are on board to direct. The studio
hasn't even read it yet, but we're hoping they want to make it.