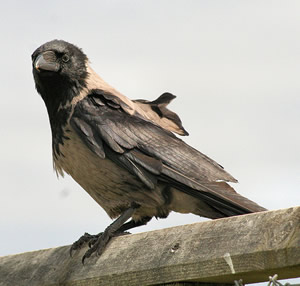 I was expecting to see him in the crowd milling in the school hall. But he wasn’t there, and finally I was handed over to a boy called Glen, who I didn’t know. Glen had stayed behind last year when the other boys in his class had come to Sydney. I winced at him. He had hair like wheat, and he wore a checked shirt instead of a school uniform. I felt duped.

Glen lived way out of town. His house was two hours away on the school bus. I stared at the sunburnt fields for the entire trip while the other passengers shouted above the roar of the engine. A long phantom trailer of dust stretched behind us as we drove. Only Henderson came this far, but Henderson knew the boy he was staying with.

Glen’s home turned out to be a disused pub on the edge of the road. After the bus pulled away, there was a strange silence. The next vehicle could be heard approaching from miles off. I seemed to have enough luggage for a fortnight instead of two days.

I was led into the front room to meet Glen’s granny, who sat by the fireplace crocheting. She smiled like a pixie but stayed in her chair. Glen didn’t have parents--at least they were never mentioned--and I was loath to make any enquires. Nor did he have television. In his room, he showed me his pocketknife and a piece of irregular crystal. Then, to occupy ourselves for the rest of the afternoon, we climbed into the paddock behind the house and set to work bothering the sheep. A mob of a hundred badly shorn withers stared obtusely at us as we shifted them back and forward. They could see no reason in what we were doing and nor could I. But that was all we had to occupy ourselves. The only half-interesting thing was the way they kept sprinkling their droppings over the dirt even as they ran away. It was odd because there was nothing for them to eat.

Glen and I shared a bath after dinner. The zinc tub stood in a lean-to tacked to the rear of the house. I sat at my end and saw from his groin that he was well on his way to manhood. He must have sensed my dejection.

I watched a drowned blowfly float between us on the hard, scummy bathwater.

Flies were everywhere. When we ate the next morning they criss-crossed the space around the light bulb. A crocheted cover on the milk jug kept them from drowning. I couldn’t swallow my cereal. The milk, tepid from the cow’s udder, made me sick to the stomach and the eggs, I imagined, tasted of hen’s arse. Before the school bus arrived, I was taken upstairs to meet Glen’s sister. She lay in an enormous bed propped up by pillows. Last week, she’d been in hospital. Glen teased her about boys.

After school Glen took me into a rundown shop that had nothing in its front window but yellowing paper. The fat proprietor sold us a box of fifty cartridges. “Going after rabbits?” he asked Glen. Glen nodded. With the live ammunition in his pocket, my host led me over splintery fences and overgrown paddocks to the rear of a farmhouse where Henderson was waiting with Warren, his billet. Glen extracted his cartridge box and balanced it on a wooden fence post. But it was for nothing. Warren’s .22 was no longer available. Warren took the ammunition, and Glen made no comment. We were forced to make do with an air rifle.

We set off, and for a quarter of an hour, we followed a wriggling sheep track along the ridge until the homestead was out of sight. The earth was rock hard. We threw sticks and our clothes became loaded with burrs, but where we were heading no one told me. As we came to a slight hollow, Warren ran ahead, climbed a few feet up a dead tree trunk and reached inside, where he knew there was a bird’s nest. He drew out several handfuls of fledglings and flung them onto the grass. They squawked and flapped helplessly. I watched as Glen strolled up with the air rifle and commenced blasting. The doomed creatures opened their beaks as if expecting to be fed.

Once we’d finished with the nestlings, we moved down the slope until we arrived at a tree in which crows were roosting. Glen took the air rifle again, walked underneath, aimed and shot through the branches, sending the entire flock into the air with a great flapping of feathers even though the rifle made very little sound when it discharged. The birds headed off into the distance, except for the one Glen had wounded, which flew further downhill to the next tree. There it sat, waiting, as we walked towards it. Once more, Glen stood under the branches and shot. This time, the crow circled briefly in the air but came to rest again in the same tree. Glen handed the rifle to its owner, and Warren took aim. I heard the pellet wiz and thud into the bird’s body. The bird stayed put. The rifle was given to Henderson, and he broke open the barrel to pump and reload. Standing with his legs apart, he shot with great seriousness, but the pellet ricocheted off dead wood. We jumped, covering our heads with our hands. Henderson was allowed a second go and the rifle was handed to me. I had to be helped with reloading. The crow sat perfectly still while I was shown what to do. I pointed the weapon up and tried to bring the bird into the sites.

“You missed,” they informed me as soon as I’d pulled the trigger. I handed the weapon back to Glen.

We continued to take turns and must have fired several dozen times each. The bird moved once, but for the most part, it sat staring into space taking hit after hit, in an unnervingly co-operative manner, its feathers slowly ruffling out. Killing it proved to be a very drawn out business. I was surprised when I saw how low the sun had sunk. I started to wonder whether there was any plan as to what we were doing when finally the crow released its hold and dropped to the earth. It looked as if it had been dead for a long time.

Warren carried the large black corpse to the hollow trunk and turfed it inside. We returned to the homestead, and then in the failing light, Glen led me back to his house. The following day, our class departed.

At Christmas, I was astonished to receive a card. I had no inkling who’d sent it. On its front was a bush nativity scene with halos made of gold glitter and native animals clustered about a manger. Inside was a hackneyed message in Glen’s unsteady handwriting. My mother collected the card and its torn envelope from the floor of my bedroom and placed it on the windowsill, where it remained until the entire crop of Christmas cards was consigned to the rubbish at the end of January. The next year brought another card, and for several seasons after that the cards kept arriving, unsolicited, like migratory birds. I paid no heed to them whatsoever, and in the end they stopped.

Simon Barker is an Australian who comes from Sydney but he has lived in both Melbourne and California. Among other things he has worked as a bus conductor, an opera ticket seller, a librarian and (unwittingly) as a typist on the Star Wars Project. Some of his fiction has previously appeared in Overland, Fieldstone Review and Eclectica and some is due to appear in Antipodes, Istanbul Literary Review, Word Riot and Ranfurly Review.