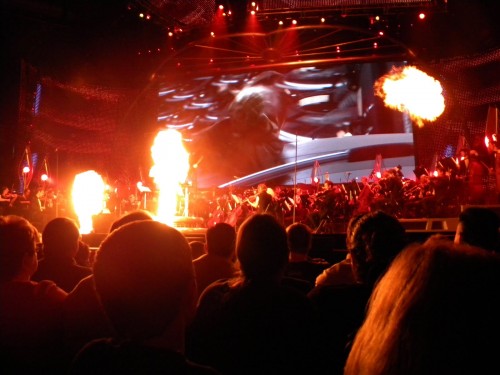 Periodically, film societies, symphonies and universities will revive the silent film era, so modern audiences can experience a lost art of watching films. But a traveling orchestra accompanying a talkie? Clearly, such an experience is rare, and what makes Star Wars in Concert unique is that, for one night, this production recontextualized the art of watching films by redefining the elements of event and scene to help audiences analyze their memories of this interstellar soap opera.

With this process of re-identification in mind, I took my ten year old son, Nicco, to re-view old clips in a broader social setting. Though he has immersed himself in the Star Wars mythos the last few years, he has not seen the films in theaters much less with an orchestra, so this experience was new to him as well as the thousands of mostly middle-aged fans attending Arco Arena in Sacramento.

Though others have written about the behind-the-scenes aspect of this traveling production, there is still some need to explain further the ambitious, multi-media composition of the show, so let me first remark that the experience was impressively busy without veering into sensory overload. Most striking was the larger-than-theater-sized LED screen, full of sharp resolution and crisp imagery that illustrated Industrial Light and Magic’s many triumphs.

Part of the success of Star Wars can be attributed to George Lucas' sociological quest to blend the varying spheres of culture (class, in particular) into a unified work. From film to film, his project grew from illustrating archetypes to synthesizing classical, medieval, and popular influences, using aspects of comedy, drama, and epic while appropriating historical and literary characteristics from different cultures to shape a futuristic production that harkened the past. Whether or not one agrees with Lucas’s aesthetic judgments, he made some effective choices aimed at erasing cultural distinctions, blending ideas about classical poetics with the pop cultural demand for technological verisimilitude.

Here, this production places the complex cooperative of an orchestra at the center of a collaborative of technicians, editors, and writers. In many ways, this production illustrates how Lucas brings together elements of varying mediums that alternately appeal to different audiences. Though Lucas synthesized these differences, he did not craft a homogenized universe in his films. His stories made clear distinctions between right and wrong, contextualizing the dialectical relationship between good and evil, villainy and heroism, love and hate, a simple context that ironically worked to uphold class distinctions (yes, good guys are elitists, as they often are).

But what is central to Lucas’s vision is the argument that boundaries (even ones set by tyrants) can be transcended if one has talent, nerve and higher aspirations, so, correspondingly, this mixed-media production blended imperfectly but effectively what is good and inspirational between high and pop cultures, and, for an hour and half (plus an intermission), blend they did.

The orchestra occupied most of the stage while the chorus was, unfortunately, partitioned (largely unseen) behind the orchestra. In the orchestra's radius were a number of performative tropes: lasers, heat-intensive fireballs, plumes of cryogenic fog, and the fleet-footed Anthony Daniels, the sartorial narrator, well-disguised in the flesh, who mediated the association between high and pop cultures by periodically channeling the very character he portrays.

Though Daniels's performance was well-received, the audience was there to sample the work of John Williams. If there was ever a doubt that this project is supposed to bring aspects of high culture to the masses, please read the end of this Los Angeles Times blog. In this interview and another, Daniels is quoted as saying, among other things, that this symphonic production will help audiences develop a better understanding (if not an appreciation) of classical music. For certain, this production does allow people to see the complex labor of an orchestra--and that this confluence of live presentation and recorded imagery takes refinement to execute effectively.

However, I am not certain if the normative Star Wars audience will go see other symphonies, as Daniels seems to wish. There is some sympathy for his argument that one performance can be a source of civic education, but Daniels seems to believe that one direct experience with an orchestra (without much instruction) will help audiences develop more cultivated tastes. In order to validate this semi-didactic approach, one has to substitute a partial-truth for the whole. This hasty reasoning, however, should not confuse audiences for the real reason to attend the concert--honoring Williams and Lucas for understanding the audience's demand for performative excellence. And from a technical standpoint, the production roused the audience.

What is most interesting is that this process of artistic reconstruction (of blending live music, live performance, and live narrative--James Earl Jones does make a recorded cameo, however) uses the interaction of sight, sound and collective memory to prompt the audience into recalling certain memories into present consciousness. This process is meant to exercise the boundaries of thought and allow the audience to re-assess its memories of the films.

However, there are some problems. The oral narrative just doesn’t do enough to direct the audience into re-viewing old reels in new and different ways. Rather, the narrative settles into the bottoms of nostalgia by avoiding some fundamental questions about art, memory and metamorphosis. For example, in what sense does a live performance alter our visual memories? Even aural ones? How does repetition, music and narrative allow an audience to create new perspectives by discarding insufficient ones? Certainly, such challenges could have been addressed by the narrative, but the production seemed to reduce everything to its simplest forms.

Some footlings: overall, the visual sequences stayed with the chronological order of the narrative, though the sequences did not always honor its chaptered themes; the chorus nary got a mention nor garnered much visual emphasis--something, I thought, they richly deserved; and the Han Solo segment seemed too short when, clearly, the audience wanted more Soloisms with their heroisms. For the encore, the Imperial March was a popular if not a predictable choice, and the orchestra seemed to take some liberties with the tempo.

More importantly, and somewhat disappointingly, audiences who have followed this franchise over the past three decades are apt not to discover new things about the characters or stories. Nevertheless, the interplay of live music, narrative and digitized clips departed from the norms of artistic expression, so the audience, my son included, enjoyed the cinematic and acoustical renderings as a way to usher in a new aesthetic context for our performance-centered culture.