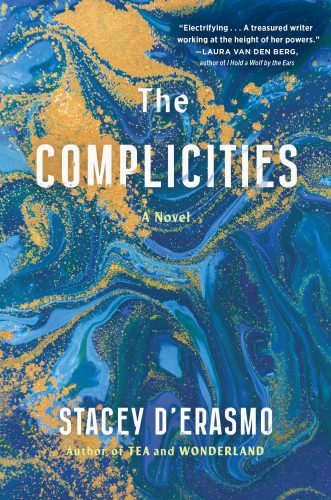 Stacey D'Erasmo's superb The Complicities, without reading as an overtly political novel, nonetheless probes a question relevant to our current social situation: how and where do you draw the line between self-deception and lying? This fascinating trick-shot of a novel resists a simplistic approach to that inquiry by using suspense to complicate the reader's feelings for its central characters, all while draping its story across the back of a whale's stinking, rotting corpse.

The story begins in the wake of a crime. Suzanne, our narrator, has recently left the comfortable security of her marriage to Alan, who has gone to prison for financial crimes. She—"alone, forty-nine, still pretty enough"—has relocated to a shotgun shack in Chesham, Massachusetts, "a lower- to middle-class beach town indistinguishable from the many such beach towns that line the curved upper arm of the Cape." With the cash left in her checking account from the divorce, she takes a quick online course and begins building a new life as a personal masseuse.

While Suzanne is setting up shop, Alan leaves prison for good behavior and reconnects with their grown son, Noah—who is not interested in returning his mother's phone calls—to begin pursuing new, potentially questionable business opportunities. As part of his community service, Alan meets and begins a relationship with thirty-something paralegal Lydia, ten years sober following an explosive car accident that left her severely and visibly disfigured. Meanwhile, waiting in the wings is Sylvia, Alan's long-estranged birth-mother, working as a Walmart greeter; unaware of Alan's release, "[a] major part of her story had just begun, but she didn't even know it."

Suzanne tells this story in retrospect, and it's fair to say she's an exceedingly active narrator in that regard—she has a particular point of view on what occurs, a self-professed degree of understanding about Alan's crimes (his cleverness with "currencies and exchange rates"). Her acknowledged equivocations about these matters are integral to the story she tells and will feel immediately familiar to anyone who has thought twice about the concept of truth in recent years: "I mean, look: sure, you can call me complicit, but there's complicit and complicit, isn't there?"

Through this story, Suzanne is reckoning with the events of her life; "I am collaging the three of us together here, cutting up time this way and that, trying to understand." D'Erasmo, as our author, uses this technique to construct a novel that doesn't classify as a thriller but does effectively carry the reader through on a wave of suspense. It is clear these threads are destined to entwine, and D'Erasmo and her narrator parse out information in a way that contributes to the novel's richness. One particularly critical revelation lands about two-thirds of the way through the book in an almost tossed-off sentence, and the timing and the delivery of this information have the effect of recontextualizing and complicating both the plot of the story and the reader's understanding of and sympathies for its central characters. This makes for a richer, deeper, and more personally impactful reading experience.

And then there's that whale: early on in her time in Chesham, Suzanne witnesses the beaching of a right whale, a particularly rare breed. She feels called to help this creature, that this is an opportunity for her to put something terrible to right; initial success bears failure when the whale beaches again to die on the sand. There, it slowly rots away as the various legal interests surrounding the corpse fight it out. Suzanne's ongoing fascination with the decomposing body can initially feel more perplexing than immediately satisfying, though D'Erasmo's smooth touch ensures it never feels truly distracting. It does play a key part in Suzanne's development, and D'Erasmo uses the plot line to fine effect as a literary device, as it shifts and slides with the currents of the novel, clarifying and confusing in equal measure.

With the limited perspective of its narrator, The Complicities brings to mind the best of Kazuo Ishiguro's work in how it exploits the distance between the narrator's and the reader's understanding of what's true. Yet, it diverges from Ishiguro's work in that, by specifically pursuing questions about truth and deception and giving us a narrator whose deliberate manipulation of story comes from a place of self-interest (or self-preservation), it resists presenting a tidy dichotomy between what's said and what's actually happening. In pursuing these more challenging questions, the book may lack the more direct and deep emotional resonance of Ishiguro's work. That should not be mistaken for a tepid response to the book, which is a compulsively readable, complex work of fiction that rewards attention to both plot and character while leaving room for the emotional space the reader brings to it. As Suzanne says in the end, speaking of her own body, the body of the whale, the body of the entire story that precedes: "Every body tells a story, but not all the stories. This whole story—it doesn't show."

Darby M. Dixon III lives in Lakewood, Ohio. You can connect with him via Thumb Drives and Oven Clocks, his newsletter about books that used to be a blog about books.