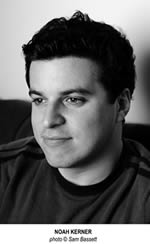 "Simply chasing cool is really a bad idea; inspired by cool is a great idea...Don't do it because you research it, do it because you breathe it," Russell Simmons tells marketing guru Noah Kerner in Chasing Cool: Standing Out in Today's Cluttered Marketplace.

Noah Kerner's extensive education in "cool" didn't begin with the legendary Simmons or any of other standard bearers he interviewed for his groundbreaking book (including Tony Hawk and top execs from Nike, MTV, and Target). It began when he started DJ'ing at the age of fourteen--performing at clubs across America with the likes of Jennifer Lopez and appearing on The Tonight Show--and got a first-hand look at what it takes to move a crowd.

Beyond the street, Kerner also hit the books, studying Economics and Psychology at Cornell, and he then went on to start Noise Marketing, an influential New York firm that helps companies like Sprite, Chevy and Yahoo reach out to younger demographics.

In Chasing Cool, Kerner (recently featured in Billboard's "Top 30 Under 30") teamed with Barneys co-CEO Gene Pressman to develop an entertaining and highly relevant book that encourages authenticity above all else. Indeed, the fact that we're covering this book on our "literary" website should be evidence enough that the style and content appeals to a broader audience than just the corporate marketing community.

What does it mean to be "chasing cool"?

It means you're pursuing something that cannot be pursued. Cool is the outcome of a process, not a strategy that can be manufactured. All those people and brands who have been fortunate enough to achieve that perception have lead the marketplace with personal vision, not chased after it.

What's the most common mistake made by marketers who are trying to reach younger demographics?

Believing that in order to reach young people you need to pander to them. Young people are driven by aspiration. They don't want to be spoken to as young people.

How did your experience as a DJ affect the way you perceive urban youth culture? What did it teach you?

My experience DJ'ing allowed me to understand up close and personal what it is that moves crowds. DJ'ing is like focus group night after night except without the cheese and crackers.

How did you end up collaborating with Gene Pressman on this book? What insights did you gain from working with him?

I went to interview Gene for an earlier iteration of the book. He said he'd give me an interview but then told me if he gave me the interview he was going to write the book with me. How could I resist? The biggest lesson was this: the process is the prize. Gene taught me to live in the process and to be okay with not knowing where I'm going. We interviewed about 70 people from Clive Davis to Tom Ford to Russell Simmons and so the entire book-writing process was a journey into the unknown. A lot of times, we all get so focused on the outcome that we forget to really experience the process. But the process is where pearls are created. That's what I learned from working with Gene.

What is the significance of naming your marketing company "Noise"?

Not much. I think it's sort of ironic because we believe that in order to break through you often have to whisper.

Your bio at Noise says you specialize in online media. What is your attraction to the web?

There's never been a vehicle through which you can reach so many people so easily and effectively. Everyone talks about the fracturing of media, but there are 10 sites that you need to worry about in order to reach 99% of the online audience.

Do you think it's generally tougher to make an impression on people online than through other forms of media, like print or television?

It's absolutely not tougher. It's far easier. The web is a two-way communication vehicle, so you're no longer having a monologue with consumers. You just need to truly understand how marketing, technology, and creativity come together.

What recent (or forthcoming) developments in online media are you most excited about?

I'm a big fan of Facebook. We do a ton of work with them and I've never seen a better viral platform. Zuckerberg takes great risks. When he launched News Feed everyone jumped down his throat, but he had the vision and tenacity to stick with it. And now, ironically, it's the number one news exchange online.

You quote Russell Simmons prominently in this book, and clearly he is someone who doesn't have to "chase" cool. Who are some other people who best exemplify the ideas in your book and why?

Everyone interviewed in our book exemplifies these ideas. Sidney Frank, the founder of liquor brands like Grey Goose, had tremendous personal vision. Bob Pittman, the co-founder of MTV, created a culture of people who were truly connected to culture. Michael Francis, CMO of Target, understands the importance of creating a quality product and aesthetic. Matt Jacobson, co-founder of Quiksilver Entertainment, gets what it takes to build an authentic brand that cares as much about building the action sports industry as it does about its own agendas. And Tom Ford is a great change agent who transformed Gucci from your grandma's bingo wear to one of the top lines in fashion. These are some of the key ideas we try to convey through stories and anecdotes.

Do you think that some people are just born cool?

I don't know. But I think that great legends are often those people who die young because they didn't live long enough to spoil their image.