Who can know what unconscious synchronic engine moves us

as they unravel in the real world? Of late, I had been indulging

myself in a casual Graham Greene film retrospective, first

Don’t look so gloomy. After all, it’s not

that awful. Remember what the fellow said, “In Italy

in thirty years under the Borgias, they had terror, warfare,

murder and bloodshed but they produced Michaelangelo, Leonardo

da Vinci and the Renaissance. In Switzerland they had brotherly

love. They had five hundred years of democracy and peace.

What did that produce? The cuckoo clock.” So long, Harley.

I then went on to view a British television production of

The Tenth Man with Anthony Hopkins and Kristin Scott

Thomas with Derek Jacoby's over-the-top performance of a thoroughly

despicable villain. This led me to search for Our Man

in Havana, another Greene/Reed collaboration, based on

with Burl Ives and Ernie Kovacs (and a cameo by Noel Coward).

Sadly, no one has thought to bring this 1960 release into

any kind of video format. I suppose one could watch Our

Tailor In Panama, based on John Le Carre's send up of

Graham's story, but as admirable an attempt as the later John

Boorman film is, all the key ingredients are missing, not

the least of which is the allure of Havana.

Now, comes the Phillip Noyce version of Graham Greene's The

Quiet American set in Vietnam just prior to decisive

colonial regime and the open door way for overt American military

what I find really worth considering is Mirimax's decision

to put off theatrical release of this film after the terrorist

bombings in September 2001, based on concerns about its alleged

I am not up for rehashing US Indochina policy or whether

Graham's book is a slur on America's good name. Having seen

the film I am still wondering what would constitute its alleged

anti-Americanism other that a reprise of those toxic "love

or leave it" sentiments of the rollicking Vietnam years

is, I hope, instructive to take note of Greene's view of his

When my novel was eventually noticed in the New

Yorker the reviewer condemned me for accusing my "best

friends" (the Americans) of murder since I had attributed

to them the responsibility for the great explosion -- far

worse than the trivial bicycle bombs -- in the main square

of Saigon when many people lost their lives. But what are

the facts, of which the reviewer needless to say was ignorant?

The Life photographer at the moment of the explosion

and horrifying photograph which showed the body of a trishaw

driver still upright after his legs had been blown off. This

photograph was reproduced in an American propaganda magazine

published in Manila over the title "the work of Ho Chi

Minh" although General ThÈ had promptly and proudly

claimed the bomb as his own. Who had supplied the material

to a bandit who was fighting French, Caodaists and Communists?

…Perhaps there is more direct rapportage

in the The Quiet American than in any other novel

Because I loved Graham Greene's The Comedians, set

in "Papa" Duvalier Haiti, which I had read just

James Earl Jones and Cicely Tyson). My search goes on despite

the one less-than-glowing synopsis of the film I found: "Yet

another of the Taylor/Burton sagas which seem to have running

Graham Greene continued to be controversial through the rest

of his life, in part because of his associations with Fidel

Castro and Panama's General Omar Torrijos and perhaps because

of his jousts with the Catholic Church that he had converted

to at the urging of his first wife. In any case, other than

Raymond Chandler, I can't think of many writers of that era

who were so readily convertible to the, uh, "silver screen."

In the context of real and imagined discourses on anti-Americanism

and its domestic prophylactic, patriotism—not that I

spend much time reminiscing—I was thinking about then-Vice

'50's and the fact that he was greeted by stone-throwing demonstrators.

About the same time William J. Lederer and Eugene Burdick

published their "prescient" novel of international

(about four years later made into a film starring Marlon Brando).

by Simon Schama in his engrossing New Yorker essay,

and Arnaud Dandieu are all quoted with compelling effect as

to the American national egocentricity. And for a grand finale,

we are given British tourist and author of Domestic Manners

of the American Francis Trollope's observation after

her visits to the United States commencing in 1827:

If the citizens of the United States were indeed the

devoted patriots they call themselves, they would surely not

thus encrust themselves in the hard, dry, stubborn persuasion,

that they are the first and best of the human race, that nothing

is to be learnt, but what they are able to teach, and that

nothing is worth having, which they do not possess.

And joining the chorus of foreign observers on America's

current policy with one of the more original assessments,

the white hot intelligence of Martin Amis. This from his "Palace

This is a vital question. Why, in our current delirium

of faith and fear, would Bush want things to become more theological

rather than less theological? The answer is clear enough,

in human terms: to put it crudely, it makes him feel easier

about being intellectually null. He wants geopolitics to be

less about intellect and more about gut-instincts and beliefs

- because he knows he's got them. One thinks here of Bob Woodward's

Bush went on to say that the execration sprang from his instincts,

be to do with his religion. Whatever else happens, we can

…When the somnambulistic figure of Kim Jong II

subsequently threw down his nuclear gauntlet, the "axis

of evil" catchphrase or notion or policy seemed in ruins,

because North Korea turned out to be much nearer to acquiring

(and the same is true of Iran). But it was explained that

the North Korean matter was a diplomatic inconvenience, while

Iraq's non-disarmament remained a "crisis". The

reason was strategic: even without WMDs, North Korea could

inflict a million casualties on its southern neighbour and

raze Seoul. Iraq couldn't manage anything on this scale, so

you could attack it. North Korea could, so you couldn't. The

imponderables of the proliferation age were becoming ponderable.

Once a nation has done the risky and nauseous work of acquisition,

may be a liability. But five or six constitute a deterrent.

And here is Terry Teachout's opening paragraph from "Pedants

There are two things desirable for fighting fundamentalists.

The first is not to be one yourself. The US government's war

on the movement is somewhat compromised by the fact that it

is run by scripture-spouting fanatics for whom the sanctity

of human life ends at the moment of birth. This is rather

like using the British National party to run ex-Nazis to earth,

or hiring Henry Kissinger to investigate mass murder, as George

Bush recently did by nominating him to inquire into the background

to September 11. Fundamentalists of the Texan stripe are not

best placed to hunt down the Taliban variety.

My sense is that the current climate (sadly) renders Schama's

by realpolitikers. Amis and Teachout are, of course,

critical of the Bush regime's policy making them, in the logic

of legislators of Americanism, anti-American (though it would

be hard to find an alien more in love with America than Amis).

abomination like the Patriot Act (It does bring to mind John

Adams' Alien and Sedition Acts)? But then, these may again

be scoundrel times, calling to mind that famous anti American 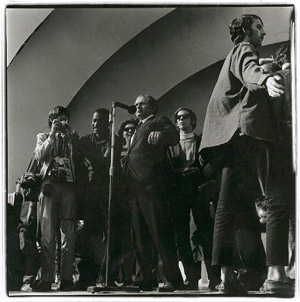