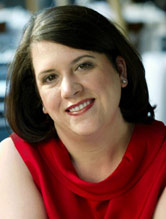 Carolyn Parkhurst's debut novel, The Dogs of Babel (Little, Brown, and Co., June 2003), is the story of Paul Iverson, a linguistics professor whose wife, Lexy, has died mysteriously by falling (or jumping?) from a tree. Since the only witness to his wife's death is the couple's dog, the bereaved professor tries to teach their dog to speak in order to unveil the truth behind Lexy's demise.

Carolyn has an MFA in Creative Writing from American University
and lives in Washington, DC with her husband and their son, who
was born shortly after she completed this book.

You gave birth to your first child the day after you finished The
Dogs of Babel. How did your pregnancy affect your writing?

Well, it provided me with a much-needed deadline, for one thing;
I knew I'd better do my best to finish the book before the baby
was born, or it might be months before I'd get back to it. But I
think it also informed the way I wrote about my characters' feelings
about having children. My narrator, Paul, very much wants a child,
and his wife, Lexy, is very ambivalent about the idea, which creates
some conflict between them, and interestingly, I think both of those
reactions grew out of my feelings about being pregnant. When Paul
fantasizes about setting his baby down on a blanket on the grass
or pushing her through the neighborhood in a carriage, those images
reflect the great excitement I felt about having a child of my own.
And when Lexy wonders if she's cut out to be a mother, that reflects
the kind of fears I had about becoming a parent.

Was it difficult to write your first novel from the perspective
of a different gender? Did you consider telling the story from Lexy's
(posthumous) viewpoint? Or maybe the dog's?

I don't think I ever considered writing the book from anyone's
perspective besides Paul's. Really, his viewpoint was the one that
seemed most intriguing to me; he's a man who's led a fairly ordinary
life up till this point, and now, in his grief, he's made this totally
outlandish decision to try to teach his dog to talk. I was interested
in seeing how far he would take it, and how exactly he was going
to manage to get through his grief and get to a point where he could
move on with his life. I never really considered having Lexy tell
the story from beyond the grave, although I did do some writing
from her perspective, just as an exercise, to get to know her a
little better. I never intended to use the resulting material in
the book, but I liked the way it came out, and I found a way to
put it in, in slightly modified form.

What sort of strategy did you use in framing this story
-- are you an outliner, or did you let it develop as you wrote it?

I don't usually have much of the plot figured out when I begin.
I start with the characters, and with a basic premise, and then
I just start writing and see where it goes. It made me a little
nervous, actually, that I didn't know where the story was going,
and I did try a few times to outline the plot, using a big roll
of paper and lots of different-colored magic markers, but it never
actually went anywhere.

You've said that "Every writer should have a dog."
How did your own dog help you mold this book?

My dog, Chelsea, who died during the time I was writing the book,
was certainly an inspiration to me; I think that the experience
of living with such a sweet dog is probably what made me want to
write about dogs in the first place. He helped me with my research,
too; when Paul was doing intelligence tests with Lorelei, I did
the same thing with Chelsea, and it gave me some interesting material.

For those of us who haven't put much thought into the subject, have
there ever been any organizations like the one in TDOB
that try gruesome techniques to get dogs to speak? What's the closest
thing to a talking dog we've had on this planet? Do you see this
ever being a potential goal for some wacky genetic engineer of the
future?

I certainly hope there have never been any organizations like the
one I describe in the book. I don't know of any real cases where
anyone's truly made a concerted effort to teach a dog to talk, although
I think it's a fantasy that's been entertained by anyone who's ever
had a dog. I did read that the daughter of Thomas Mann actually
taught her dog to type, which inspired me to have Paul try the same
thing. One of the books I used for my research published one of
the poems this dog had supposedly composed, which was a little nonsensical,
but pretty good for a dog. As for the genetic engineering question,
that's something I'd never even considered. I don't know if it's
a great idea, ethically speaking, but it certainly would be interesting
to see what they'd have to say. I suspect my dog Chelsea would have
spent all his time talking about this one time he found half an
Egg McMuffin on the sidewalk.

You covered a lot of esoteric material in TDOB
-- from animal communication to tarot-card reading to square eggs.
What is the weirdest thing you encountered in your research that
didn't make it into the book?

I did a lot of research on service dogs, in an effort to figure
out what dogs' physical and intellectual capabilities are, and I
learned a lot of interesting tidbits that didn't make it into the
book. For example, there are some dogs who can predict when an epileptic
person is about to have a seizure, up to an hour ahead of time,
and can warn the person, so that they'll be in a safe place when
it happens. And there are cases of dogs recognizing illness in an
owner; I read an anecdote about a dog who repeatedly nipped at an
arbitrary spot on his owner's leg, I think, and it turned out the
owner had a cancerous skin lesion there that he'd never noticed.
Dogs perceive a lot of things that humans aren't even aware of.

Considering the linguistic content of your book (and being
that you are, after all, a writer), it seems appropriate to steal
a question from the great James Lipton (host of Bravo's
"Inside the Actor's Studio"): What
is your favorite word?

Wow, that's a tough one. There are so many good choices (effervescent?
toboggan? gloomy?), but if I have to choose just one, I'll go with
"yearning." It has such a mournful sound to it; it's almost
onomatopoetic. And when you say it out loud, it feels like a longer
word than it is; it seems to take an extra beat to pronounce it.
It's like there's an extra syllable of sadness in there.

For a story that heavily involves the power of words and masks,
your book is impressively non-political. As a writer living in DC,
is there an added temptation to politicize your work? Do you consider
yourself to be a politically active/convicted person?

Actually, while I've lived in DC for a total of 7 years (in two
different stretches), nearly all of this book was written while
I was living in San Francisco for three years. I don't know that
it would have been a different book had I written it in Washington;
the interesting thing about Washington is that, even though it's
the seat of American government, it's also just a city where people
live. Because the only government-related job I've had was a summer
internship at the National Endowment for the Arts, most of my friends
are from the writing program at American University, or from working
in a bookstore, so they're more literary than political. There are
certainly issues I'm passionate about, but my political activism
is mostly limited to supporting various advocacy groups, rather
than being directly involved in causes.

And the final question on all our minds is of course, what's next
for you?

I'm working on a new novel, but it's only in the very early stages,
so I'm hesitant to say anything specific about it, and I'm also
working on a short story. I'm enjoying working on the story, because
there's so clearly an end in sight, which is not always the case
with a novel. And I feel like I can do things in a story that I
couldn't necessarily sustain for a whole novel; this story, for
example, has a very nasty, unlikable narrator, which I'm having
a lot of fun with, but I wouldn't want to try writing a whole book
that way.