Just to know I got something that somebody else don’t have that’s one thing that makes me feel good.
—Herman Divers

Rosie Cowan is petite, a sprite. Her cropped gray hair shows off her earrings, luminescent red apples. She just met me, but she doesn’t hesitate to yank my wrist when my gaze wanders over her shoulder.

I’m looking through the glass door of the gallery at the empty Saturday morning main street of Lucas, Kansas. Outside, it’s a sunny day in January. Inside, Rosie waves her newspaper at me. She is explaining how she bought her buffalo. She has snatched up the “Kansas Traveler” section to show me a picture of it. But her hands haven’t yet slowed enough for me to glimpse the tiny article.

I can’t get a word in to point this out. She’s saying, “And when we went inside the gallery in Taos—Taos is so far-out, just far-out—we said we were interested in the buffalo outside, but the owner wasn’t there so the clerk called him and Wendell heard him say, ‘There’s a couple from Kansas here who is seriously crazy.’”

When I had entered the Grassroots Art Center earlier that morning, it seemed deserted. I’d originally planned to stop in Lucas to see the Garden of Eden, an outdoor collection of biblically themed concrete sculptures and a few gargoyles. But the Garden didn’t unlock its gates until ten. Cruising around town, I could find nothing open except a highway café and this gallery.

The gallery’s yellowed limestone blocks looked warm. The door was unlocked. Inside the building, though, it was dark and quiet. I walked back outside to check the opening hours posted on the front. It was exactly nine a.m.

A woman in a white turtleneck and crocheted sweater vest emerged from the back. As she flipped light switches to illuminate the high ceiling’s embossed tin tiles, Rosslyn, the director of the center, asked me where I was from.

I told her Tipton, a place like this, surrounded by sloping pastures and flat fields. But I hadn’t been to Lucas since I was little. “Not too much has changed,” she replied, “but I’d be happy to give you a tour.” 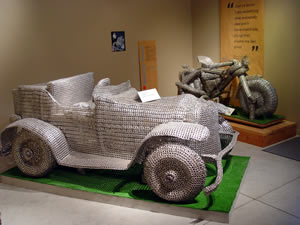 The center collected local folk art, Rosslyn explained. It also hosted traveling art shows and was the home of the Eccentric Kansans Conference. The keynote speaker talked about preserving the shop of a Texas man who made orange sculptures: the fruit, not the color.

“It was very educational,” Rosslyn said, grinning at the tassels of her loafers. We entered the first room of the gallery and approached a rotating clump of junk with plastic shoots, something like an unnatural houseplant. When a lake in Los Angeles was drained, John Woods hired homeless men to pick up the debris. He fastened everything—including syringes, false teeth, and part of a bomb—into this structure and put it on a circulating pedestal for display.

Eccentrics, I learned, putter and tinker. Like Herman Divers, a Topeka native who would come home from work every day and piece together pop tabs—this was when you could pull the tabs off completely and wrap them around each other. He would stop each night after the thin metal opened slits in his skin. Yet the work added up: he made a whole car out of sheets of interlinking tabs, along with an umbrella, a motorcycle, and a parade costume. He might never have stopped, except that he ran out of tabs. The right kind was only produced for about seven years. So now he strings buttons together into similar sheets.

These people are different from professional artists, who usually submit to public criticism in order to make a career. Grassroots artists work alone in their basements for years, accumulating things in private, driven by something as pure, I suppose, as self-satisfaction. Like Inez Marshall, who made a two hundred pound birdhouse, or the Fort Hays State University janitor who made art objects with refuse salvaged from Dumpsters outside of dorms. Leroy Wilson’s wife just gave him the basement to paint and repaint after he retired. For twelve years he relentlessly layered fresh colors, designs, coat on top of coats.

He’s dead now, but I still wonder how he would have felt if he saw the piece of his basement wall—cut out, carried up into the light, and hung on this wall. Would he have climbed back down his cellar stairs, clutching the chipped handrail, carrying Joseph’s coat inside his head, routine unfazed?

Would you hesitate to flick the switch on that darkness? 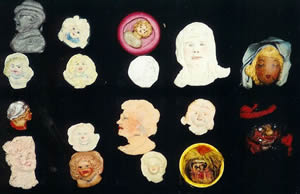 We looked at Betty Milliken’s chewing gum cameos, faded pink coins with bulbous noses and tiny painted eyes. “How do you find these people?” I asked.

“And then you just give them a call?”

“We can’t afford to miss our chance. When we called Betty, we had just lost the cigarette-butt guy.”

These people make objects out of everyday things—not just because concrete and junk and chewing gum are cheap, but because they’re there. They work with what they know. Maybe this is why John Woods, the lake dredger, calls himself a historian, not an artist.

The tour and our conversation stretched across Lucas. As we left the gallery and walked down the middle of the street to the Deeble house, Rosslyn told me that Mrs. Deeble’s miniature concrete landscapes in the backyard weren’t art to Mrs. Deeble. They were simply places she visited (Estes Park, Colorado) and imagined (a version of Mount Rushmore with the faces of Lucas’s founding fathers, including a famous woman opera singer).

As we stood and pondered what this woman left behind in the world, I realized that Mrs. Deeble probably just wanted to look out her door and be able to say, “I did something.”

On the other side of the door, small Victorian rooms were covered first by what seemed to be tin foil—actually silver insulation—and then hundreds of pieces of art by Mri Pilar. Each was essentially a reassembly, a reimagination of trinkets and trash. In my favorite, a disembodied Barbie head with feathers enhancing the blonde hair was joined to the body of a pebbly blue brontosaurus.

I think I had this exact dinosaur as a kid. I turn to tell Rosslyn, but she’s looking past me. She doesn’t hear.

On the walk back, we meet children playing in the road, and both of us greet them. The tour should be finished now. But Rosslyn is going to gather some literature and contact information for me, and I want to dawdle through the side gallery one last time.

I’m scrutinizing the cameo collection for Betty’s teeth marks when I hear the front door open and a voice cry, “Where have you been?”

I think the question is addressed to Rosslyn, until I’m sucked into the whirlpool eyes of Rosie Cowan. She doesn’t wait for me to reply. “Come meet my husband Wendell,” she says.

Soon I’ve learned it’s Rosie and her sister Barbie that help collect things for Mri Pilar’s pieces, and Rosie has circled back to buying a buffalo in Taos. She wants me to visit the Cowan Corral, home of Kansa—a giant fiberglass buffalo decorated with the state seal.

The words of the Taos gallery clerk echo in my head: “There’s a couple from Kansas here who is seriously crazy.” Rosie related them with such glee and pride.

“Where are you parked?” Rosie demands. “Do you want to follow us out?”

“No, I can’t,” I say, then turn down Rosie’s repeated invitation to hop in her SUV.

I push open the door. Rosslyn reminds me to be in touch. Rosie hollers at me to come back.

Of course I will.

Aubrey Streit (arstreit@gmail.com) is a native of Tipton, Kansas, and recently spent a year teaching English in Bratislava, Slovakia.