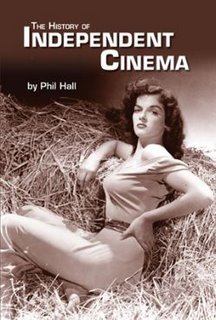 Even limiting the scope to American film, Phil Hall set for himself a daunting task in The History of Independent Cinema (Bear Manor Media). Despite the title, this is not so much an exhaustive, definitive look at films outside the studio system, as it is an entertaining read that covers the major players, recalls some artists we may have forgotten, and always reminds us that this is a subjective work.

One of the joys of surveys like this is that readers may be exposed to filmmakers they’ve never heard of, and will go searching on their own, and maybe make a connection. Another salacious joy is being able to argue with the book over obscure filmmakers left out—what, no Richard Kern? And, Gasp!—no Andy Milligan? Hall’s book in that sense is almost pure joy.

The book follows a more or less chronological account of Independent Cinema, from early attempts by Thomas Edison to set up his own outside-Hollywood monopoly, through Chaplin and Preminger, Warhol and Cassavettes, down to today’s variety of auteurs ranging from Michael Moore to Guy Maddin. The last quarter or so of the book provides brief overviews of subgenres like "Race Films,” Non-Theatrical films, Educational Films, Musical documentaries, the Cinema of Transgression, etc. Hall chose to focus his attention on the major players, those whose contributions made a significant impact on both filmmaking and the viability of Indie film. So no, no chapters on porn or exploitation flicks. He also reminds us of independent cinema’s role in breaking down racial and sexual taboos as well as in such technical advances as color film, wide-screen formats and sound.

It would have been nice to have had more discussion about the state of cinema as it stands now. Hall does talk briefly about both of the major developments impacting independent cinema in the 21st century—major studies making Indie-esque niche films, and the explosion of filmmaking made possible by cheap technology, viewer savvy and outlets like YouTube and MySpace. We are truly in an odd place where everyone can make a film and send it out to millions, but no one notices…because everyone can make a film.

Each chapter concludes with a Top 10 list by selected filmmakers and critics, who note their choices for the most influential independent films of all time. (Disclaimer: IDT film editor Matt Sorrento's list is included, though he had adsolutely no say over this review!) Such lists are bound to both overlap and contradict; while it is interesting to read about those choices, after awhile they begin to seem like filler. Again, part of the fun of books like this is to make your own lists, with the text as a guide to making your choices in context. While geared toward a general audience that may not be quite up on the history, film fanatics will also find much to chew on. Aside from sparking debate, there is obscure info sure to be fodder for trivia-questions.

Hall, contributing editor to Film Threat and author of other books that take the pulse of non-mainstream film, has taken a vast wealth of history and moments of daring and distilled them into a breezy narrative that gives the reader a detailed overview, one that leaves room for consideration about today’s indpendent work.

As Yogi Berra might have said, there are so many films out there now that no one sees any. Now more than ever, literally anyone can add their own visual paragraph to film history, though standing out among the thousands being shown right now on the web or available on DVD is a crapshoot.