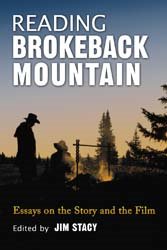 Two years ago, while teaching a freshman college writing seminar on gender issues, I discussed The Crying Game with my students. (It was highlighted in Susan Bordo's text The Male Body, required reading for my class and, I'd say, for anyone who may be reading this.) One student asked how popular Neil Jordan's film was the year of its release, and I replied -- flatly, I now realize -- that it became a surprise hit, thanks to controversy. After more discussion, another student came to my aid: "It was like their Brokeback Mountain." I replied that, though the films are different in many ways -- lumping gays and transsexuals/-vestites together is always shifty -- The Crying Game's influence on the mainstream was quite similar.

Yet, Brokeback could easily side into cultural amnesia, as did The Crying Game. Its merits and importance aside, Brokeback's prominence in the 2005 awards season could make it a thing of the past: think of other "issue-based" films, like A Beautiful Mind and Million Dollar Baby now in the $5.99 digital dustbins at SprawlMart.

Thankfully, unlike those simpler films of lesser quality, many dynamics to Brokeback are still unchartered. At its roots, the story/film is a classic romance, albeit one that highlights love most forbidden. The Crying Game, in comparison, avoided the vulnerability of a non-hetero romance by burying its love story within a thriller.

Brokeback is also an outright indictment of conservatism. While the idyllic unions between Jack and Ennis occur away from their homes, the men live in two versions of social repression. Ennis del Mar exists in a rural, lower-class Wyoming -- an undeveloped area where his family resides in a rather squalid apartment house, in essence rural and impoverished, less bucolic than it is a wasteland. Jack Twist works for a middle-class Texas business owned by his small-minded redneck father. (The Texas-Wyoming pairing may be a joke: in the Rough Guide to Westerns, Paul Simpson cleverly points out that Ennis and Jack are, respectively, from the homelands of No.s 1 and 2 in the Bush Jr. administration -- wink, wink.)

The lives of Jack and Ennis are hell, but ones they cannot abandon -- not so much because of their families, though society has programmed Ennis to rely on his wife as if she's a grown-man's mommy. These boys were born country and love just about everything the lifestyle provides, save its family-values-inspired gay holocaust. They are true cowboys who heard livestock as the real frontiersmen did years ago -- the real workers beneath the six-shooting archetypes that our storytelling tradition celebrates. So devout are they that they even agree to herd a less-romantic livestock, sheep, which requires no masculine show like roping and pinning horns to the ground.

To detail all of Brokeback's issues would require years of study from various perspectives, and hence a lead-off project, Reading Brokeback Mountain (from McFarland Press), collects a variety of perspectives on both the film and the original Annie Proulx story. Editor James Stacy offers a wide scope of scholarly approaches and some personal reactions, thus making for a text that's erudite in style but grounded in humanism.

Two opening essays investigate the film's pastoral traits to situate Brokeback as a new take on a classical form of escape. While the original idylls celebrated a peaceful respite -- and often opportunity for romantic love between men, let's not forget -- Brokeback creates a temporary sanctuary that eventually crumbles, as the conservative influence smothers Ennis and ultimately destroys their relationship. "[T]he story had already been written, over and over again, in the landscape of Proulx's American literary forebears, as well as their ancestors who were writing in the homoerotic pastoral tradition that had not yet included two cowboys." In Ennis and Jack's original meeting, the satanic figure of Aguirre watches while preparing to cast them out from their Eden; hence, their reunions at Brokeback over time are haunted by the knowledge of the exterior repressions.

"Mythical" readings are followed by John Kitterman's "Love and Death in the American Story," which contextualizes the Brokeback with Leslie Fielder's thesis of American literature: the strain that focuses on men's -- usually a pair, one of which is non-white -- escape from the establishment. Natty Bumpo and pals, Ismael and Queequeg, and Jim and Huck all found a way to escape feminized domesticity by heading outdoors. So too do Ennis and Jack, though their escape is less a flight from responsibility than a means to discover themselves, each other, their sexualities.

From here on, queer studies readings take over and make good on a variety of perspectives. Interestingly enough, Lisa Arellano argues that the story endorses "heteronormative" lifestyles, in that the film consumes any hope for a healthy gay life. While true in a literal sense, Arellano misreads by allowing moral imperatives to smother art. This reading assumes that a symbolic sacrifice, such as Ennis and Jack, is not worth the benefit of a greater understanding in its viewers.

Many obvious takes appear, likely because writers are treading on new grounds: arguably the first full-bodied, non-exploitive gay film to reach the American mainstream. A rewarding take comes from Charles Eliot Mehler, who covers the popular responses to Brokeback in a milieu that "encourages viewing the homosexual, as sensationalistic, the homosexual as exotic, the homosexual at a safe distance." There's certainly a lot to discuss here. On one end, we have Larry David's humorous New York Times opt-ed piece that, regardless of its simplicity, appears at once ironic and homophobic. The apex comes with Jack Nicholson's gasp of "Whoa!" before he announced the winner of Best Picture at the Oscars to be Crash, a moralistic film that plays like an after-school special on how not to be a racist. Nicholson's response may the purest critique of the mass-media's fear of alternate sexualities.

Surprisingly broad for its page length, this collection lays the groundwork for future study. Reading Brokeback Mountain may appear dense and scattered, but at this stage, such a collection would have to be. Three years after the film's release, we are still digesting its grandeur and cultural importance, even if it began in smaller circles years earlier, when the New Yorker published the original story. On Amazon.com's page for Close Range, in which Brokeback the story was first collected, a customer review by SEB "wurvous" begins: "Proulx will break your heart with that last story." This was written just before the film's premiere, and does it seem prophetic now.

Scholarship on Brokeback still has miles to go before it can settle. The journey begins here.