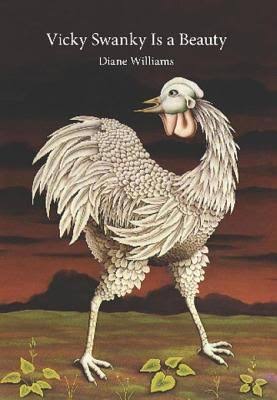 "My Defects," the first "story" in Diane Williams's latest book, Vicky Swanky Is a Beauty, might serve not just as an introduction to this book but also to Williams's work as a whole:

I'm happy at least to do without a sexual relation and I have this fabulous reputation and how did I get that in the first place? I am proud enough of this reputation and it stands to reason there's a lot that's secret that I don't tell anyone.

I want to end this at the flabber, although I am flabbergasted.

I opened the cupboard, where the treats are stored, and helped myself and made a big mess, by the lakeshore, of the food, of the rest of my life, eventually.

Michelle, the doctor's nurse, showed me a photograph of her cats. The smart cat opens the cupboard, Michelle says, where the treats are stored, and she can help herself, and she makes a big mess!

I crossed the street to survey the lake and I heard crepitations--three little girls bouncing their ball. I used to see them in perspective--my children--young people, one clearly unsuitable. She can't help herself--she makes a big mess.

With my insight and skill--what do I search for at the shore?--the repose of the lake. But sadly, although it does have a dreamy look, it is so prone to covering familiar ground.

To identify the genre of this piece by enclosing the word story in quotation marks is not to impute some lack of quality, but rather to indicate that on first encountering Diane Williams's fiction, readers are likely to puzzle over the classification of such condensed and often enigmatic works as short stories. Short, yes ("My Defects" is quoted here in full, and it is typical Williams in its length), but stories? Prose poems, maybe? Prose fragments? Surreal reveries? Her stories have characters, but they hardly "develop" in any conventionally recognizable way. Sometimes a story seems to be advancing a plot only to abandon it or veer off in an apparently different direction. Most of the stories are too brief to evoke many details of setting, and while Williams does return to particular themes--especially sex--the stories are generally too elusive for the reader to find them dedicated to "saying something."

In "My Defects," we are introduced to a character whose identity seems continuous enough but who is never really developed beyond her initial assertion that "I am happy at least to do without a sexual relation" and her accompanying puzzlement that "I have this fabulous reputation and how did I get that in the first place?" It could be said that the story is essentially an illustration of the narrator's declaration of her circumstances in the first paragraph. To adequately discern the nature of the story's portrayal of the narrator's situation, however, we must understand the extent to which her initial words are both completely truthful and disingenuous. She doesn't tell us why she is without a sexual relationship or why she is happy about this, nor what precisely her "reputation" is. (Perhaps she speaks for the author, who certainly does have a "fabulous reputation" among her admirers?) Yet at the same time, the narrator expresses in the first paragraph what surely does seem to her a literally accurate account of her life's circumstances, however elliptical the reader might find it.

In a sense, the narrator tries to clarify what she means by this initial statement in the following paragraphs, which at least appear to present a semblance of plot and action. As is usual in a Williams story, the transition is abrupt, the connection at first obscure, facilitated only by some characteristic Williams wordplay. We might all along think that the narrator is speaking from her kitchen, except for the abrupt shift to the doctor's office, which suggests that these scene changes may just be arbitrary. However, the parallel invocation of "a big mess" encourages us to find continuity after all, naturally enough inviting us to wonder what the mess might be. (Are all references to the "mess" just versions of the narrator's?)

That the next paragraph finds the narrator watching children at the lake, imagining her children, "one clearly unsuitable," along with a general air of regret perhaps unavoidably leads us to suspect that the narrator's visit to the doctor might have been to seek an abortion, although the visit could be simply an implication that she is pregnant. The syntax and transitions are opaque enough that perhaps neither of these scenarios apply, however, and we are best advised not to try pinning down the story to its particulars at all. The unanswerable questions persist in the final paragraph. Is the narrator being ironic or sarcastic in referring to her "insight" and "skill," since she ultimately gives us little reason to think she believes herself to possess much of either? Does the "dreamy look" of the lake coincide with the "repose" she seeks there, and wouldn't "familiar ground" actually contribute to repose? And we should again be attentive to the wordplay: a lake by its nature covers unfamiliar ground, although it could also be just a continuation of the ground the narrator currently finds frustratingly familiar.

A story like "My Defects" seems designed--and both its radical compression and its oblique structural devices certainly appear to be products of design--to unavoidably provoke the reader into looking for coherence and continuity while also frustrating any attempts to collapse the story into a too-facile coherence or to find continuity too readily. Like many of Diane Williams's stories, it suspends the reader in its own dreamlike shifts and playful language such that the most satisfying response may be to relax the demand that the story yield up its meaning immediately, to perhaps be willing to tolerate indeterminacy. This would not really mean conceding the story is meaningless, a conclusion reached by too many readers when encountering "difficult" fiction, but rather accepting that its meaning (even at the level of "following" the plot) is suggestive rather than certain, including even the possibility of overlapping, multiple meanings.

Williams's work would probably be categorized as "flash fiction," but while her stories have no doubt been a major influence on the development of flash fiction (they began appearing in the 1980s, and Vicky Swanky is now her sixth collection), they are more highly wrought, with a greater attention to the possibilities of the form as a means of foregrounding language itself, than most flash fiction has become. They do not settle for snapshot realism, and, despite their length, they in fact encourage slower, more careful reading. If flash fiction potentially appeals to a new, attenuated attention span among some readers, Diane Williams's stories reward expanded attention and encourage rereading. One could spend as much time lingering over her brief fiction as reading much longer stories by more conventional writers, some of which require very little of the reader's close attention.

Not all of Williams's stories are as compressed as "My Defects" (although some are even briefer and more compressed). The title story provides a character study of sorts of Vicky Swanky, who, "years ago," was a beauty. Now, "her breasts were flat. Her hips were flat. She looked older than her forty years. "The first part of the story offers a reasonably cohesive portrait of Vicky Swanky, whom the male narrator announces as an "old friend" who is "going through a divorce" and who invites the narrator over to her house. What the two do together is suggested in typical Williams ambiguity: "In connection with sex, we lightened up a little then and we dumped some of it off the edge at a minimum." The second half of the story introduces elements that seem to develop the situation: the narrator brings over a dog; it snows; Vicky Swanky serves food. The narrator expresses his own uncertainties about the situation: "It was getting busy concerning the basic meaning, the degree, and the quality." In the story's final paragraph, a plumber arrives and indicates that he will need "to remove everything from the nipple in the wall to the toilet."

"Vicky Swanky," although still very short, is nevertheless characteristic of Williams's more extended fictions. Such stories appear to progress by accumulating incidents, but these incidents lead the reader on paths that inexorably wander in uncharted directions, sometimes changing tack altogether. This is especially true in the novellas Williams has written, such as On Sexual Strength and Romance Erector. It is somewhat disappointing that Vicky Swanky Is a Beauty does not include a novella, or any substantially longer stories, since while these longer works can magnify the elliptical, discontinuous qualities that pose a challenge to the passive reader, for that very reason they provide often compelling tests of how far Williams's elliptical method can be taken on a larger scale.

That Williams attempts longer narratives only infrequently may be a sign of the limitations of her approach, or it may simply represent a preference for the shorter form, but it does invite comparison with Gary Lutz, a writer with whom Williams is sometimes associated and who has expressed admiration for her work, specifically for its sensibility to the syntactic and auditory intricacies of the sentence. Lutz has also worked in the flash form, especially early in his career, but in his later work he has combined a focus on the sentence as center of interest with a fuller exploration of character and plot, as in his most recent book, Divorcer. Lutz may have sacrificed some of the nonlinear purity and hallucinatory intensity found in Williams's fiction, but there is also arguably a greater sense of discovery in his stories, of a writer seeking out the further possibilities of his chosen strategy. If there is a weakness in a book like Vicky Swanky Is a Beauty, it is an ultimate lack of variety one doesn't really find in Lutz's work.

Daniel Green is a literary critic whose reviews and essays have appeared in a variety of publications. He also maintains the literary weblog The Reading Experience.