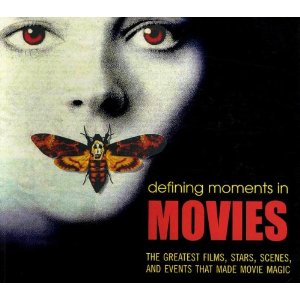 In a 1968 interview, Jimmy Stewart told Roger Ebert about an elderly man who wandered out of the woods during an on-location shoot in Canada. "Which one of you is Stewart?" the man said, and Jimmy kindly responded. Far from starstruck, the man explained to Jimmy how he'd never forget one scene of his, in which Stewart says a bit of poetry to woman in an adjacent room. The scene was vague to Stewart at the time, though it lived on vibrantly for the aged moviegoer.

The memory stayed with Stewart as did the moment in Come Live with Me, with Hedy Lamarr, for the man in the woods. Often one grand image or moment allows us to commit to memory a work that would fade away otherwise.

Part of Cassell Illustrated's "Great Moments" series, Defining Moments in Movies, edited by Chris Fujiwara, collects such immortal moments, as interpreted by a gang of fine film writers. Moments takes us decade by decade to profile scenes often emblematic to their respective works. By relating the bit to the whole, this book creates something we could call movie metonymy, a micro-scale approach to film criticism.

Much of this hefty text of what seems like countless entries includes the undisputed greatest moments, from the first hand-cranked, silent images to the latest adored by critics. Expect the obvious, like Charlton Heston's parting of the Red Sea, though the entries on such standbys provide surprising, well-written responses. (Don't be fooled by the coffee-table design -- never again will you judge a slick book by its cover.) Widely known moments in avant garde history are also to be found, such as the slit eye in Dali and Bunuel's Un chien andalou, while many lesser-knowns appear later. From a variety of contributors, the brief entries capture the moments and their significance in a snapshot, making the text into an immediate critical reader, friendly to buffs and the intellectually curious alike.

With tons of films covered -- we're talking months of browsing time here -- even the seasoned moviegoer will discover new films/directors, while entire movies are refreshed from memory. By also including "Key Events" and "People" in movie history, Moments turns into a nice little primer on film history.

Collected by decade, however, the entries lack thematic coherence and continuity. Zhang Yimou's entry shares a page with Billy Crystal in the Hitchcock spoof Throw Mama from the Train, wrongfully reflecting the logic of late-night channel surfing. And occasionally, an entry fully misses the mark: the shock of a tiger jumping from the jungle (now a cliche) hardly defines Apocalypse Now, Coppola's Herzogian quest into the unknown. Yet such misfires are few in a text full of riches. Get shuffling, and upgrade that Netflix account.