It's the anniversary of NAFTA, Buddha's enlightenment, and America's entry to World War II. Years later, we'll remember December 8, 2015, as the day these books hit the shelves: 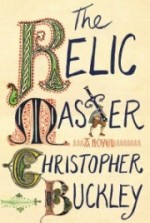 The Relic Master by Christopher Buckley: "A writer known for his satires of Washington, D.C., takes aim at religion in 16th-century Europe, where a relics trader is forced to steal one of Catholicism’s most coveted objects. Buckley (But Enough About You, 2014, etc.) roams far from his usual inside-the-Beltway turf while tilting at earlier establishment types in this comic historical novel, his 16th book." - Kirkus

Paradise City by Elizabeth Day: "Elizabeth Day’s third novel is her most accomplished yet. Paradise City possesses a propulsion that her earlier novels, for all their emotional courage, lacked. The narrative is divided between four interweaving characters: the self-made millionaire Sir Howard Pink; Beatrice Kizza, a Ugandan asylum seeker; Carol Hetherington, an unassuming widow; and Esme Reade, a young journalist." - The Guardian (refers to the UK Edition published in May)

Ashley Bell by Dean Koontz: He's still at it. In an interview about his new book, Koontz said, "I’m not sure it’s a good thing that so many writers are going to school to become writers. When I became a writer, people like John D. MacDonald and a lot of writers I admired never went to school to be writers; it was just something they wanted to do because they loved books. I’ve often wondered if, over time, the writing programs will lead to a homogenous kind of fiction that isn’t very healthy.”

Also, happy birthday, James Thurber, who based on this quote likely wouldn't have supported Donald Trump:

“Let us not look back in anger, nor forward in fear, but around us in awareness.”

I apologize if I'm starting to sound like Garrison Keillor. The Facebook app is brainwashing me with its constant birthday notifications.

Be well, do good work, and don't shoot anybody.