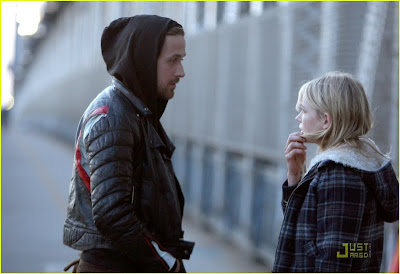 Blue Valentine is an affective film that uniquely tells a familiar Boy Meets Girl Then Loses Girl story. Director Derek Cianfrance (Brother Tied) supplies the viewer with two sections of his characters’ relationship: the hopeful beginnings and the beaten down endings. The years in the middle are left up to one’s imagination. At one time, Dean (Gosling) and Cindy (Williams) were a young, happy couple. As their lives progess, they aren’t as young and they definitely aren’t as happy. And so their story goes. The film cuts back and forth between two couples who, minus hairline recession and facial expressions, are seemingly the same people. But a lot has happened since the days of clever pickup lines and ukulele dance parties. Now there’s a child to raise, bills to pay, and a missing dog to find. Their bright eyes, the kind that are bron from naivety, are all but faded out by the time we meet up with them later on.

Both Gosling and Williams play their roles to perfection. Everything about their interactions, both physical and verbal, is completely believable. That's even more impressive considering that Dean and Cindy’s struggles are so relateable and painful that, for the viewer, poking holes in the performances might seem like a viable self-defense mechanism. But there aren’t any holes to poke. As conflicts arise, both characters continue to develop and their portrayals become well-rounded. The film’s nonlinear style is used to deliver new layers in Dean and Cindy and does so with effectively. Watching Dean's attempts at levity and Cindy's annoyed looks of disapproval is like a getting punched in the gut. Their actions never seem unnatural and that’s saying so much for a story whose content practically asks for melodrama.

Andrij Parekh’s (Half Nelson) cinematography is just as responsible as the writing and the performances for the frustration and agony illustrated onscreen. It’s easy to know which couple (past or present) is on screen just by paying attention to the use of contrasting colors. While it’d be simpler to say that Parekh uses brighter and happier colors during the couple’s brighter and happier years, that'd not only be inaccurate but also insulting to the work that went into creating Valentine’s visual makeup.

One of the film’s most insightful scenes takes place in a dingy, cheesy, science-fiction-themed hotel room. Parekh’s use of lighting and colors not only captures exactly what a room like that would look like but also comments on what would cause a good looking, non-trashy couple in their late-20s to book that room. The answer: desperation. Valentine seems to say that the hardest thing to fix is a marriage. And even with a clear image of what built that marriage’s foundation, it’s still difficult to see what should have been done differently.