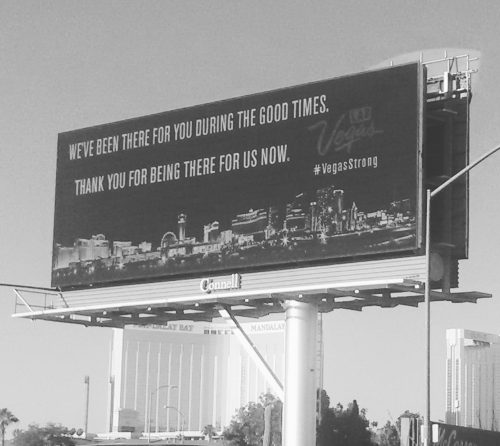 I've decided to relaunch Tourist Information, my Identity Theory blog-column from the early 2000s, with the plan of writing a new post each Thursday. (Though in true Identity Theory fashion it will most likely end up being random.)

I've already written and thought so much this week about the mass shooting that took place down the street from me in Vegas that I'm burnt out. So for my first post of the new Tourist Information era, I am reposting what I wrote on Facebook about my experience of the incident:

It's hard to describe what it feels like to turn onto a road after leaving your neighborhood and tell yourself, "You can't go that way, hundreds of people were just gunned down there."

I try not to think about specifics of the violence. I think about what I can do to help, but what little I can do feels helpless.

I want a time machine.

I want to tell the front-desk agent at Mandalay Bay, "An old man is going to request a high floor with a view. Don't give it to him. For the rest of your life, you will never stop thinking about putting him in that room."

I want to tell those tourists at the concert, "Stay home. Vegas isn't that great. Be with your families. You never know when you'll see them again."

And then I get really, really sad for them.

I don't want to see football highlights on TV news. I don't want to hear political opinions about gun violence. They feel hollow, useless, and detached.

I wonder about the sickness in this man's head, what would lead to premeditate an attack like this. The plotting. The acquisition of machine guns. The belief that shooting hundreds of people would lead to pleasure, solve his problems. One man's sick desire can lead to countless people's gruesome suffering.

I've spent a thousand nights on the strip with the trust that no monster would come along and exploit the vulnerability of the crowds. Despite having been close to a half dozen minor shootings, I insisted on believing we were protected from an outright massacre.

I can't imagine what the families of these victims are going through, what life will be like for those survivors who did not have the luxury of distance from the bullets.

I want us all to go back in time, back before any of this could ever have been possible, and make the necessary changes to the world that seem, now, too late to make. I don't have a lot of hope. But there has to be hope, right? There just has to be.

I'm sorry, I'm a bit out of sorts. Thank you for listening.

Donate to the victims of the Las Vegas shooting.