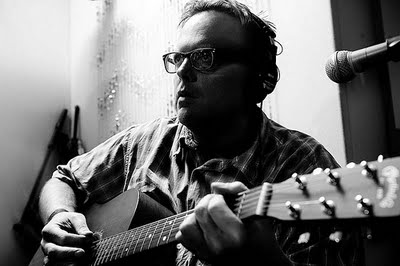 Due to pleasant coincidence and shared taste, Eef Barzelay (Clem Snide, and solo fame) has just recorded an EP of songs by Seattle songwriter Terri Moeller, the voice behind Transmissionary Six and Terri Tarantula. As the collaboration was his idea, I interviewed Terri's beau and bandmate Paul Austin about how they got in touch with Eef, picked the songs, and felt about the result.

Anna-Lynne Williams: So, tell me about this new six-song EP of Eef Barzelay singing Transmissionary Six songs that you've released on Bandcamp. How did you hook up with him for this and how did you pick the songs that would be recorded?

Paul Austin: I don't really know him. We crossed paths about fifteen years ago, when Clem Snide played Boston often, prior to rocketing to fame. I've followed Clem Snide on and off, but his two solo records really knocked me out. And I saw he was doing this on-line thing before the holidays, where he would write a personal song for you or someone you know. It was pretty simple: you send him a hundred bucks, a bunch of details, and he cranks out a song just for you. The perfect gift for a Clem Snide fan, right? And I thought, well, if someone is doing that, they are obviously up for anything. So I asked him if he'd cover a song Terri wrote, as a surprise for her. He said sure, I sent him "Shaker Star," and when it came back we were pretty amazed. In a solo acoustic setting, he's very dynamic. In fact, I'd say that a band setting often homogenizes what's special about him. Not that he's asked my advice on such things.

So that was gonna be that, but he really enjoyed working with the song, tweaking it lyrically and musically, and said so. Later he got back in touch, with the experience of working with that song still in mind, and suggested we expand on it and make a full EP. The idea was that he'd enjoy working out his own versions, with complete freedom to change anything he wanted, lyrically or musically, and we'd have the fun of hearing a voice we often have coming out of our stereo anyway singing songs we wrote. It sounded like fun, and it was. It still is. He's a very interesting guy. We did pick the songs, though, and tried to choose songs that seemed to be in his wheelhouse but also fairly basic, to leave plenty of room for him to do his thing. And they came back with time signatures changed, new chords, lyrical changes, and in one song he just left out the chorus entirely.

That's so cool. What was Terri's reaction when you played her the first song?

It was a strange little science fiction kind of moment, just looking at the cd player in disbelief.  "How did my words get into his mouth?" That kind of thing. Especially if it's a voice you're used to hearing often, as a fan. It must be like if one day, suddenly, your cat says "Why did you paint every room beige? This is my whole world in here, and I hate beige. Fix it."  Sometimes things that are never supposed to happen... happen. I'm not really comparing Eef to a talking cat, though, I hope that's clear.

Are you planning on doing any other collaborations like this with other artists?

We talked about this being the start of a series of collaborations, but I'm not sure where that's going to go. It would be great to get a band to do six of his songs now. And then involve more songwriters, especially those who you wouldn't necessarily put together on the same mix tape. Well, not mix tape any more, those are gone. Flash drive. Zune playlist. Wait, Zune's gone too.

If Transmissionary Six was going to cover six songs by another band, who might you pick?

Bands we'd cover six songs from? Well, Eef's songs excepted, I'd have to say Spoon, or the Mountain Goats. If we couldn't decide, we'd do a mash-up. Spoongoats. It'd be a Pitchfork wet dream!

What are you and Terri working on at the moment?

Terri is making her second Terri Tarantula record... I'm not really doing much of anything. Mostly hanging out at the mall.

And I know you have a lot of exciting musical toys. What is your favorite right now?

I don't think I have anything exciting in a cutting-edge technology sort of way. Finding old, oddball gear and trying to coax sounds out of it is exciting though, and right now it's '60s drum machines. Although I do look forward to Korg's "Monotribe" coming out.  Anything with such an oxymoronic name has to be worth checking out.