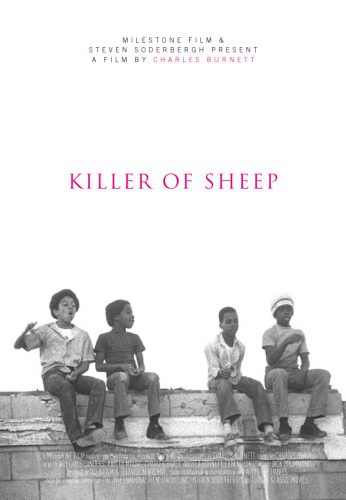 Here’s the thing: black life matters. And because black life has always mattered, Charles Burnett made Killer of Sheep (1977). His first film brings audiences into the world of black people – not just merely depicting it. It is crucial, because it came at a time where blacks, coming out of the 1960s, were attempting to make their way up the social and economic ladder.

Killer of Sheep was timely, due to the fact that in the ’70s, the black depiction on screen was dominated by Blaxploitation cinema, which after the release of Melvin van Peebles’ Sweet Sweetback’s Baadassss Song and others like Bill Gunn’s Ganja and Hess, portrayed blacks in negative, stereotypical roles that often did nothing to advance the goals of black Americans. It is timeless, because it can serve as a blueprint for any filmmaker to combat those same stereotypical, one-dimensional depictions, as well as help black and other directors contemplate a new way of making film.

In a 2010 interview in Filmmaker Magazine, Burnett said, “I was only trying to be objective – that was my conflict. Not imposing. I wanted to do something that reflected the way people in the community would see themselves. Coming from another place, you can see a much larger picture. But when you’re in a well, you can only see the narrow light above. If you’ve been living like that for a long time, it can have an unproductive effect on you in many ways. So it wasn’t my personal conflicts. It was the conflict of the community.”

Killer of Sheep centers on Stan (Henry G. Saunders) a slaughterhouse worker, and his family, living in Watts, CA. We first meet Stan on his knees framed in low-angle shot, with someone towering over him. From here on, in this sequence, friends, neighbors, and his wife constantly invade his space. Stan’s daughter stands at the kitchen’s entrance, wearing a dog mask, nearly forgotten. She is the only person not bothering him, and not framed above him but at eye level. Burnett employed the techniques of Italian neorealism: loose shooting, long takes, casting of amateur actors, theme, and editing and coupled those filmic techniques with black concerns – for example the necessity of maturing faster, depicted in the opening scene, where a little boy is chastised by his father for showing a lack of initiative in a situation, or prejudice of skin tone by white store owners looking to hire out blacks, and cultural (items) such as hymns, blues music, classical music by black composers like William Grant Still, introduced through soundtrack – and ways of passing time such as dominoes, playing “the dozens” – and the keeping of the black vernacular.

Burnett was cautious, and understanding of the Italian neorealist form. He appreciated it. The point he is trying to make, that like the Italians of the '50s, blacks often have a uniqueness that stems from the fact that they’re systematically oppressed. Burnett is also submitting, to black people, there is no black superhero in a pink suit and fur, selling drugs, messing with white women, attached to romantic ideals about progression that fit right into the power structure, that’s going to save you. As he discussed in a 2007 interview with Filmmaker Magazine:

"…And then you take a movie like Hustle and Flow where they’re saying, 'It’s hard out here for a pimp.' That’s the biggest slap in the face! I argue with people who say the main character wants to make it, he’s working hard, and you can’t knock him for that. You can’t? He pimped his girlfriend! He could’ve gotten a job at McDonald’s. And he’s supposed to be a hero? The ends justify the means? That logic justifies selling drugs, doing almost anything. And that’s what gets promoted? That’s the last thing we need in the community. Why not make something that would uplift? It doesn’t necessarily have to be overly positive, but [it should at least be] realistic and not trying to denigrate…."

It’s important to emphasize the America part since Killer of Sheep is just as much about a city and its economics as it is about race. Throughout the film, shots of children playing in various areas around South Central LA are interspersed with scenes of Stan, his family, and Stan at work. Burnett used decisive, elongated shots, soundtrack, and rhythmic pacing, to symbolize the aggravating, slow movement up the economic ladder. His filmmaking choices also worked to intensify the lethargy brought on by depression, and being poor. And because the kids are poor and black in America, because industries stand taller – shown brilliantly by Burnett’s framing of buildings and Stan’s work – Killer’s main obstacle is to show what these decedents of slaves value what most do: time and space.

In a scene where kids sit on a high wall, resting from playing, the song “The House I Live In” by Paul Robeson, a song Robeson wrote about his perspective on America, begins. The kids sit on top of the wall staring out into a dismal area where apartment complexes used to be. They’ve been playing with pieces of wood, building a platform, riding bikes, and playing with toys. They make something out of their situation. In a way, they are satisfied, but not. They want more but they can’t get more. Similarly, in a later scene, when Stan goes with a friend to get a motor for car so he won’t appear broke, he and a friend, Eugene, end up breaking the motor by letting it slip off the back of a truck. Stan had wanted to move it further into the bed but Eugene, tired from hauling it down a flight of stairs, is through with it. Eugene articulates their plight perfectly: “All that work for nothing.”

It is something we all question as Americans: what am I really doing this for? For oppressed people, it’s worse. In a scene where Stan dances slowly with his wife to Dinah Washington’s “This Bitter Earth,” semi-enclosed in darkness except for a window, Stan attempts to show affection to his wife (Kacey Moore) who has been fuming with desire. When Stan dances with her, she tries to caress him, tries to entice him by kissing him, rubbing him, and bringing him closer. Stan does not react, solid as steel. They go on and she keeps on. She keeps trying infiltrate; to wake him up. He doesn’t go for it and walks away. She walks to the window, stretches out on it, and begins to cry. Her body language, the deep darkness, the shot, the music, says it all: what are we supposed to be doing in here? Stan leaves her in darkness – in her space. It’s where we see her come out of the film most of the time. The places where Stan must help free her from. But how can you do this when the world says you don’t matter? Buildings tower over you, and your people get killed in the streets by the police to prove it.