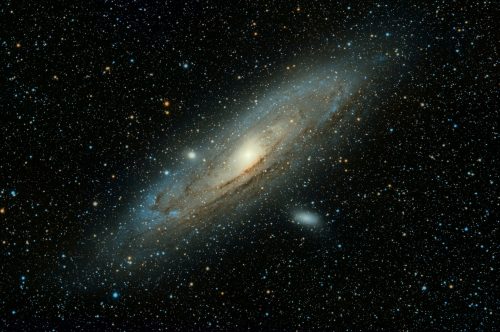 Photo by Guillermo Ferla on Unsplash

Because the idea that a place is so dense
nothing escapes – not light, not sound –
is something I can’t wrap my small human
mind around. Imagine approaching it, Cody says, not
giving up on my inability to grasp the concept,
but as you enter it you begin to stretch, like silly
putty. And even though you’d already be dead
because nothing can live in the dark void of space,
imagine if you were alive, you’d just keep stretching,
infinitely pulled in opposite directions but never
breaking apart because the gravity is so dense,
nothing can escape. Some things are just too big
for me to understand. Now scientists say
they’ve found a new one, the closest one to Earth
ever discovered. It’s still 1,500 lightyears away
which is another concept I don’t understand but
that’s too much for one poem. For now I’ll just
accept that black holes exist, that they are closer
than we previously thought, and that they are
a force so powerful, every mistake I ever made
would be swallowed by them.

Courtney LeBlanc is the author of the full length collections Exquisite Bloody, Beating Heart (Riot in Your Throat) and Beautiful & Full of Monsters (Vegetarian Alcoholic Press). She is a winner of the Jack McCarthy book prize and her next collection of poetry will be published by Write Bloody in spring 2023. She is also the founder and editor-in-chief of Riot in Your Throat, an independent poetry press. She loves nail polish, tattoos, and a soy latte each morning. Read her publications on her blog: www.wordperv.com. Follow her on twitter: @wordperv, and IG: @wordperv79.

Send Us Your Poetry