As in life, some promises are hard to keep onscreen. This is true in the case of Walter Hill's cult pic The Warriors. The film begins with a bang, when a legion of gangs unit for a meeting that transforms street verite into fantasy. The crowd promises pure menace, with the remaining runtime its playground. Cyrus, the leader of the most powerful gang, calls a truce among the attendees to control the city, though the title gang gets framed after he's murdered. The chase narrative begins strong, though slowly dies. The gangs that come after “the Warriors” seem like rejects from the opening scene's drawing board. We're left imagining a real powerhouse threat, like the one Mad Max faces in part two of the series.

The same kind of folly appears in Black Death. The connection between this medieval thriller and The Warriors may seem stretch. Yet, we recall that the latter film's plot was inspired by history, the classic Greek Anabasis (hence, Cyrus, et al.), though the style comes from comic books by the way of the Lucas fantastic adventure age. Black Death begins with such promise. No surprise (considering the title), the plague has overtaken the land. A group of medieval warriors approach a monastery, seeking a guide for them to reach a village blessed with protection from the disease, where the dead can be brought back to life. The village is described as the kind of sanctuary/promised land so familiar to the monks that they waste no time in believing its existence. Osmund (Eddie Redmayne), a young monk, volunteers to guide the warriors, though for personal gain, since the trip will take him near his forbidden love (a subplot in full service of the greater arc). 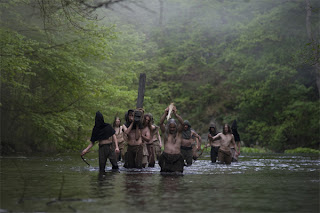 The offer proves to be a trick, since the warriors actually seek a village consumed by the devil which they will defeat and take capture of the leader. The village is now described as the darkest of all things in creation, a sharp dive of irony that rattles the poor misfit on the quest. Viewers drawn to such a film will expect extremes of Dantean torment in the film's payoff. What actually shows may feel like more worthy irony, but only to symbolically minded viewers. The target audience will feel cheated by a film without the ideas or guts to bring hell to life onscreen.

Redmayne (also in My Week with Marilyn) can tap into dread and anguish, though the latter emotion brings him close to scenery chewing. Sean Bean, playing the leader of the gang, aims to suggest a tortured soul, while his gang mates blindly ape badassitude, looking as if they just gave up their dream of a heavy metal career. Yet inspiration was dead long before filming.