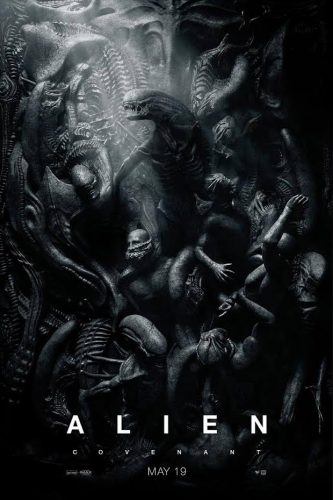 Alien: Covenant, the latest in Ridley Scott’s iconic creature feature franchise, has some big ideas that it wants you know about. It’s thinking about duality, and fate, and as with the preceding Prometheus, ontology. It’s thinking quite a bit about world historical concepts of creation and the natural world. It read and listened to and watched a lot of stuff on these topics, if you’re interested. Of course, it’s got a story to tell about some space pioneers, with twists and tension and pathos and humor. Oh, and it’s got the wretched gore and gnarly aliens you know and love.

Ultimately, Covenant’s interests are just diasporic enough that it gets hard to see the deserted forest for the xenomorph in the trees. This meandering has the unfortunate side effect of bringing the narrative into directions that are sometimes boring, sometimes downright silly. And while the film succeeds in freshening up familiar franchise beats, it also recalls some of the darker shark-jumping moments of the series, and calls Scott’s recent metaphysical tack into question.

Thankfully, he does not entirely lose sight of what’s always worked for the Alien films: production design that is simultaneously beautiful and nauseating, a strong ensemble cast, and an enigmatic android that holds the key to a narrative door that you can’t help but want to see opened. I wonder, though, if this familiarity is a saving grace, or if it just brings the film’s shortcomings into sharper contrast. Between the kung fu choreography, philosophical debates couched in overwrought textual allusion, and awkward attempts at sexual tension, I can’t help but think that Covenant strays too far from the path.

As the title would suggest, Covenant is not at all shy about the theological concerns driving it forward. It follows a tribe of colonizers hoping to set up shop and procreate on a planet far away from Earth. After some (abruptly introduced) catastrophic developments, the crew is thrust under the guidance of Oram (Billy Crudup), a “person of faith” who worries that his religious leanings will be a detriment to his ability to connect with the other passengers. Then, they pursue a ghostly transmission to a closer but previously unresearched promised land, despite protests from Daniels (Katherine Waterston), our Ripley surrogate. As is to be expected, there be monsters in this uncharted territory, and all hell breaks loose.

Later, we learn that this planet was also beset by a brutal plague that leaves its denizens frozen in Pompeii-like agony. And in a particularly dire moment of frustration and confusion, Daniels, the Doubting Thomas, tells Oram that his faith is a linchpin for keeping the crew alive. At the risk of inviting the ire of those who doggedly pursue defense against “religious persecution” (whatever their definition of the term may be), a specter I only raise because Oram comes off as just such a person, I must note that hamstrung biblical allusions in a sci-fi actioner always strike me as thematically dissonant. It doesn’t help that this sort of spiritualized genre blending has produced some negative results for Scott recently. It’s the same approach that lead him to the now-infamous “Moses vs. Rock Monster” battle in Exodus: Gods and Kings (2014).

Thankfully, Covenant does a bit more than just lay out intertextual reference to spice up a familiar narrative. In fact to some degree, it skewers that very notion by providing an antagonist who deliberately misreads or otherwise corrupts text for nefarious ends. Covenant similarly finds ways to adhere to the canon but still remains off-putting enough to keep the viewer on edge. We know the facesucker is going to facesuck, and the xenomorph will burst from someone’s chest, but the film leaves room for guesswork and legitimate surprise as to when it happens, how it happens, and who it happens to.

When the film explores this notion of misreading, of perverting canonical narrative, it is at its most compelling. It gets into especially interesting territory with its androids (Michael Fassbender, pulling double duty) pointing to questions about creation and the history of knowledge-seeking. Covenant wants to subject these questions to the uncanny and the unholy. We are brought to a temple of profane learning, and left to wander. That’s how we get shelves of scrolls, those emblems of ancient and sacred knowledge, that contain graphic renderings of Giger-esque grotesquerie and a character who is part Dr. Moreau (by his own admission), part Charles Darwin by-way-of Leatherface.

It’s in this “workshop of filthy creation” that the film is able to play around with its biggest themes, winking at its own traditions and bringing them to revolting highs. It’s also where some of the film’s most patently absurd moments occur, including a dramatic recital of Shelley’s “Ozymandias” (which I balk at because I think it’s become shorthand for a dumb trend of “cerebral toughness”) and an over-the-top fistfight that probably didn’t need to happen. There’s a push and pull here, between breaking or reflecting upon the mold, and throwing out empty aesthetic flair in the name of doing something new. For instance, Scott tries for some immersive moments this time around. We follow along as sentient spores sink into a man’s ear canal, a true realization of the extreme closeup. We are given xenomorph POV shots during an inevitable climactic chase sequence. While I can’t say that these cinematographic choices achieve the kind of seamlessness implied by immersive visuals, I guess can say that I’ve never seen these sorts of things in an Alien film before.

There’s one side effect of Alien: Covenant that I can’t seem to shake, and it comes as a great disappointment to me. Not only did I look askance at some of the team’s creative choices, I also began to understand why Prometheus was met with such resistance when it was released. I understand that there was indeed a fundamental shift in the franchise from political allegory to philosophical tract. Call me a rube for not picking up on this the first time around, but an objective fact stands: a sequel that casts doubt on the film before it is a bad sequel.

Still, there’s something admirable about the effort to treat a franchise as a sieve, or a chalkboard. To watch the filmmakers thinking out loud can be painful, and has the appearance of a studio throwing as many ideas as they can at a nearly forty year old film series. But at least they’re thinking. Maybe soon Scott can descend from the mountaintop, and bring all of this home.