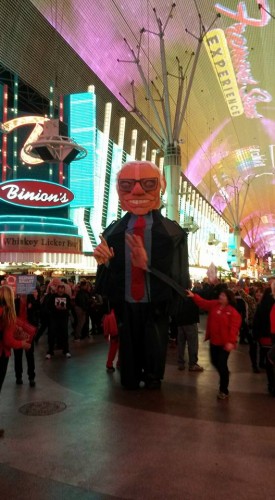 After encountering a giant Bernie Sanders on Fremont Street in Las Vegas last night, I realized that as a former Vermonter, I'd be remiss not to prop up some books that #feelthebern:

Why Bernie Sanders Matters by Harry Jaffe (Dec. 2015, Regan Arts.): "Vermont Senator Bernie Sanders may be the least political person in politics—a brusque, unpolished, Jewish Socialist from Brooklyn with deep-seated convictions and distaste for small talk. He is also, at seventy-four, the rising star of the Democratic party."

Outsider in the White House by Bernie Sanders (Sep. 2015, Verso): Bernie's 1997 political autobiography, updated for his presidential bid, previously known as Outsider in the House. In These Times calls it "a clear, compelling and comprehensive vision for reinvigorating democracy, reducing poverty, rebuilding the middle class and restructuring our health care and education systems.” 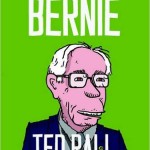 Bernie by Ted Rall (Jan. 2016, Seven Stories Press):"Bernie joined a tiny independent party from Vermont. He ran for mayor. As a socialist. And won. That was the beginning." Radical political cartoonist Ted Rall tells the story of Bernie in a graphic novel.

The Essential Bernie Sanders and His Vision for America by Jonathan Tasini (Sep. 2015, Chelsea Green): "Tasini draws heavily from Sanders’ ample public record of speeches, statements, and interviews, and couples his working-class spirit with specific legislation he has championed on a number of core proposals that comprise a broader people’s agenda for America."

The Speech: A Historic Filibuster on Corporate Greed and the Decline of Our Middle Class by Bernie Sanders (Nation Books, Mar. 2011): A reprint of Bernie's famous 8.5-hour filibuster protesting a 2010 tax deal to preserve Bush-era tax breaks for the richest Americans.

A clip: “The rich and large corporations get richer, the CEOs earn huge compensation packages, and when things get bad, don't worry; Uncle Sam and the American taxpayers are here to bail you out. But when you are in trouble, well, we just can't afford to help you, if you are in the working class or middle class of this country.”

Or you could watch the whole speech if you have a day to kill.