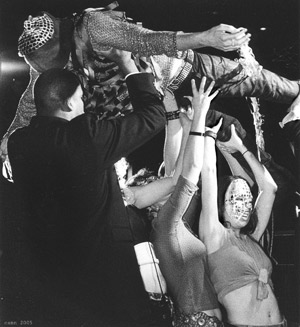 Rock operas, by definition, are experiments in melodrama and the most important element is the music, not the storyline. They rarely, if ever, wander into the territory of serious drama or attempt to address the pressing issues of society, particularly the issue of artist rights in the recording industry. But writer Bob Weidman's rock opera, “Automatic Superstar,” follows in the footsteps of Gerome Ragni and James Rado who used their renowned late-sixties musical, “Hair,” to protest the Viet Nam War. In similar fashion, Weidman takes advantage of the medium's accessibility and popularity to teach the audience valuable lessons in cultural history and social action.

Fame, anonymity, trust, and love are the bare essentials of the story about Matic, a masked rock star whose quest for stardom quickly turns into a struggle for survival. In the beginning, the audience learns that Matic (Neil Nathan) has been giving his music away on the Internet. Much to the chagrin of his manager and record company, he continues to give his fans free music guided by the belief that music cannot and should not be sold or bought. When the pressure increases for him to make record sales and to give more of himself to his fans, Matic develops a near-fatal drug addiction and suicidal tendencies; however, his reckless behavior also makes him a target for industry heavies for whom stars like Matic are expendable commodities.

This storyline may remind the audience of the many rock antiheros who have graced stage and screen alike, suffering from angst and social isolation; however, during the course of the performance they will quickly discover that Weidman does more than just put a new spin on an old tale; rather, he uses the paradigm of the rock star to explore the music industry’s unprincipled treatment of music and its creators as well as how digital music and the Internet have revolutionized the industry. This is rather risky for Weidman, considering the vehicle he’s chosen to address these issues, but Weidman is an unconventional man known to take risks.

Born in East Meadow, New York, Weidman spent most of his spare time practicing the guitar and managed to learn six other instruments, including the bass, viola, violin, cello, drums, and keyboard. However, his parents, who worked in the fashion industry and medical field, doubted his career prospects in music, thus becoming a rock star was not an option. He attended Brandeis University where he majored in sociology, but after completing his degree he decided to finally pursue his passion for music. In 1989 Weidman moved to San Francisco to become, in his own words, a “rock star.” He lived there for ten years, refused to move to Seattle in the early nineties when grunge exploded, and played in several musically different bands. There was 3BRB, which had an R&B vibe; Quiddity and Falling Birds, both of which were progressive rock bands; Justice, which was fusion of hardcore and hip-hop similar to Rage Against the Machine; and The Great Big Huge, which he considers to be the greatest rock band. Once The Great Big Huge dissolved in 2003, Weidman returned to New York to start over. It was while playing with the band Faye that he began to write “Automatic Superstar.”

As a trained musician and sociologist, Weidman never considered himself to be a writer, but in a moment of caffeine-free lucidity he decided to make his first serious attempt at rock and roll song writing. It was a project he knew would challenge him to write from the heart, something he believes he had not been doing despite his years on the scene. He had already written the first two songs of the play, “Sexy Mess” and “Automatic Superstar,” when he envisioned the archetypal figure of the masked performer. The image embodied his understanding of the common problem faced by most people seeking fame, including himself: the desire for success competes with one’s fear of success. Matic so wanted to be and be recognized as a successful rock star, but he did not want his stage persona to overshadow the music; thus he wore a mask when performing and when dealing with fans in order to maintain their focus on his music. Unfortunately, his alter-ego only amplified his iconic status, which he confesses in “Shine,” the final song of the play, “I am not who you think I am/That’s something I’ll never be.”

Inherent to the desire for success is the dream of financial freedom and, perhaps most importantly, the freedom of self-determination. Yet, as Weidman understood from experience, the entertainment field leaves little room for either. In order to become a superstar, one must not only be starved for such a level of success, but one must also be willing or most often is forced to do what is necessary to reach that level. Unfortunately, due to its performative limitations, the opera did not provide the facts about the ongoing fight between artists and the recording industry.

According to the Recording Artists’ Coalition’s statement on recording contracts, the standard agreement establishes a creative feudal system whereby the artists perform all the work while the record executives reap all the benefits. In most cases, a recording artist does approximately 90% of the production work that makes their record companies nearly 100% of the profits. Artists write the songs, choose the producers and engineers for their albums, as well as hire and manage those responsible for post-production work (i.e. photographers, video directors, and designers). Record companies provide an advance to cover these production costs and then charge it back to their artists’ royalty accounts, which represent a small fraction of the income earned from the artists’ work. Marketing efforts are also managed by record companies; however the services provided are limited. The real revenue is generated from tours and concerts, yet the same recoupment policy that applies to album production also applies to concert and tour production. Essentially, the artist must also pay for the strenuous self-marketing efforts of touring. At the end of a seven year contract, an artist can be as financially insecure as he was prior to signing the recording agreement. Toni Braxton, TLC, and Florence Ballard of The Supremes are all examples of artists who were left bankrupt by their record companies. Herein lies the importance of the digital revolution. 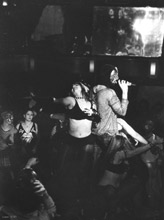 The Internet and Mp3 files changed the music industry forever. One brazen, young man in particular stood at the forefront of this revolution. In 1999, Shawn Fanning released the first version of Napster, a peer-to-peer file sharing system that allowed young people to obtain their favorite songs from new and old albums without having to pay for an entire CD. Despite the controversy Fanning caused by further infringing on the rights of recording artists, he sent these artists a message about the industry’s future. Middlemen were no longer needed in the production, marketing, and distribution of music. Any recording artist familiar with computers and the Internet could do it all himself, directly from his computer to his fans, who as Fanning proved, are eagerly waiting.

Not only does the advent of the digital revolution mean more money for the artist, but it also ensures more creative control. Unfortunately, most solo artists and bands missed this message as evidenced by the law suits filed under the Copyright Infringement Act by U2's record company and others. Weidman did not miss Fanning’s message, though. Recognizing the potential of what can be considered a social movement and its role in changing the way recording artists interact with record companies, he penned lyrics that speak candidly about the mistreatment of rock stars by their record companies as well as the possibilities provided by offering digital music directly to fans.

Almost half of the opera’s eighteen tracks are prescient arguments for using the Internet to fight record companies. The audience is first struck by “Give the People What They Want,” a hard hitting meditation on the false personas created and marketed by record companies in order to boost record sales. Through verses such as “I’m the one that tells you things just might not/Be all they seem” and “I’m the one who’s been hiding/Behind this plastic mask/I’m the butt in your ashtray/That you can’t help but smoke/I’m the cost of my new album/That is leaving you broke,” Matic admits that he is as much a pawn in the music industry as the fans. He also acknowledges that he is one of the expenses of an album, the quality of which cannot justify the price charged consumers. “Straitjacket” exposes the manner in which creative control is wrested from a signed artist: “Straitjacket, that’s how they got me/I want to rhyme but they don’t want to let me/They tell me do what you’re told and don’t ask too/many questions.” Ironically, two songs previously, Matic’s creative control comes into question when his manager reminds him that “Now everybody loves you/And that’s a fact/But it was all because of me, and that don’t come for/free.”

It’s obvious that Weidman was interested in writing a show that appealed to a wide audience while also composing a poignant lesson about the dangers of cultural bankruptcy. The opera’s score is as accessible as he believes rock music should be, and this is demonstrated by the messages embedded in each song as well as the singular message embedded through out. From “Give It Back” to “Give It Away” to “Straitjacket,” and “Give the People What They Want”, Weidman reminds the audience that rock & roll music is not about fame and fortune or the empty pursuits of either. It is about love: the love an artist has for his craft, the love an artist has for his fans and vice versa, and the spiritual sanctity of such passion. In his own words “It's the love that gives people souls.”

In addition to formerly being an assistant editor for identity theory, Crystal AM Nelson is a freelance writer and photographer. She currently lives in New York City.