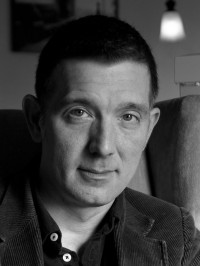 Joseph Bates is the author of Tomorrowland: Stories (Curbside Splendor, 2013) and The Nighttime Novelist (Writer's Digest, 2010). His short fiction has appeared in such journals as The Rumpus, New Ohio Review, South Carolina Review, Fresh Boiled Peanuts, and InDigest Magazine. His short story "How We Made a Difference" was published in Identity Theory in 2008. He teaches in the creative writing program at Miami University in Oxford, Ohio. Visit him online at www.josephbates.net.

I’m not convinced that it does, though I’d like to believe. I get hopeful when studies come out showing how fiction lights up the parts of the brain associated with empathy—one study was in the news just in the last few days—and of course that relationship between text and reader is what sets fiction apart from more passively-enjoyed arts like film. In fiction you’re able to share a consciousness with someone else for a time...but does that really make for a more empathetic person? Even if readers have a greater ability to understand and connect with others’ points of view, I’m still not sure they have any greater inclination to do so in real life. If anything, fiction maybe allows for the opposite revelation—when you read a novel or story, from your part of the world or from another, from today or a century ago, and suddenly you realize, Someone out there knows what it’s like to be me. There’s not just a wonderful surprise but a relief in that. I don’t know if that changes the way you live your life, but at least it reassures you that you’re not as alone as you thought.

Amber Sparks’ amazing May We Shed These Human Bodies. (I actually gave away several copies and had to keep buying another for myself.) Kafka’s The Metamorphosis and Rachel Pollack’s 78 Degrees of Wisdom, a book on the Tarot, are probably the two I have to replace most often. All spooky good.

It took me a long time to learn restraint, especially in terms of humor. Early on in my writing, I never met a joke I didn’t like, never passed up an opportunity to make one. But naturally if everything is funny in a story, then nothing is...really, it was a kind of avoidance, rather than looking at the more difficult emotions or subjects within a premise, even a kind of defense mechanism (as humor often is). Anyway it was Brock who called me out on it, and especially who opened my eyes to the fact that humor can work so much more subversively (and sophisticatedly) than I’d been using it. Even as a path to serious subjects, to sentiment. That absolutely changed my writing.

I read Kafka over and over again, especially “The Metamorphosis” and “A Country Doctor,” as well as Calvino’s Cosmicomics. I reread Denis Johnson’s Jesus’ Son every semester with my students and find something new in it every time.

For sheer music, it’s hard to beat the last line of Gatsby: “So we beat on, boats against the current, borne back ceaselessly into the past.” Though I also love the turnaround in this line from Calvino’s “At Daybreak,” where the narrator has just watched his sister disappear into the newly-forming Earth as the Big Bang cools into matter: “My sister had remained in there, and I never found out whether she had stayed buried in those depths or whether she had reached safety on the other side until I met her, much later, at Canberra in 1912, married to a certain Sullivan, a retired railroad man, so changed I hardly recognized her.”

I have two routines, depending on what time of year it is. I teach, so a lot of my work gets done in the summer, when I binge-write. I’m usually up by 8 and out the door by 9, and I park it at a favorite coffee shop and get as much writing done before I’ve had a chance to properly wake up. No looking at news or email...I’ve got to get started before I’ve begun to overthink anything. I’ll work until I can’t anymore, mid-afternoon, then go home and take care of my animals and sit a little bit, read or play a video game or watch baseball, before I go back in the early evening for a little more. I stick to that summer schedule pretty religiously, six or seven days a week, because I know that, once the school year starts, I’m probably down to every other day or night, or sometimes even just the weekend when things are hectic. I do keep up writing in the school year, sitting down as often as possible, but I prefer to immerse myself in it, even though it’s sometimes tough to come back to planet earth when I do.

Absolutely! Vangelis’s Blade Runner score is my go-to writing music...there are probably half-a-dozen bootleg versions out there, all this great space detective blues. Classical can be great if I need help finding a particular tone—for something otherworldly, for example, Holst’s “Neptune, the Mystic” or Debussy’s “Sirènes.” Ravel’s String Quartet in F Major is in heavy rotation. Both in the writing and editing phases of Tomorrowland I found myself listening a lot to Aram Khachaturian’s “Adagio” from Gayane, which Kubrick famously used in 2001. I’d just let it run on repeat for hours. Sometimes I listen to stuff with lyrics, but only if I’m feeling my energy drag and need a push. Eldorado by ELO is a good one, or The Very Best of Marvin Gaye. 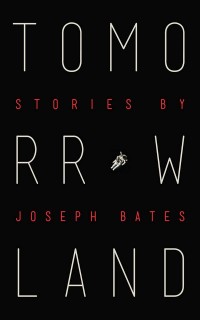 I just went to The Strand for the first time on a trip to NY in support of Tomorrowland, and felt wonderfully overwhelmed by it. I have very fond memories of the used bookstore I’d go to when I was a kid, where I first bought armloads of comic books and, later, armloads of Stephen King and Ray Bradbury. I’m probably a writer in no small part because of those trips, where my allowance would go up in a blaze of glory.

Kafka’s home and gravesite. Whenever I have friends or former students go visit, they’ll sweetly tag me in the photos, so it looks like I’ve been there a bunch of times with many different people. I’ve already been to Graceland and Wrigley Field, so Prague is the only pilgrimage I’ve got left.

I do, though I don’t use it as often as I first thought I would. Turns out I’m too much of an underliner and dog-earer.

In terms of my writing life, mostly. Every day I see interesting articles or interviews come through, new (or new-to-me) stories being shared, or authors I’d like to check out. And it helps me know what’s going on in the writing community around town and campus, and keep up with my talented friends whose successes I want to celebrate. Plus I’m addicted to it. So there’s that.

My current one, as a teacher of creative writing. Every day I get to hang out with bright, gifted young people who love fiction and want to talk about what makes it work. It’s a tough job, and demands a lot of time and energy, but I can’t imagine being as happy anywhere else.

Smoking. I need to quit.

People who talk during a movie. Or, more generally, people who never learned how to whisper.

Alissa Nutting’s Tampa, Brian Evenson’s Windeye, Charles Yu’s Third-Class Superhero, Amber Sparks’ May We Shed These Human Bodies, and every book by my incredibly talented friends and labelmates, and every book due from them soon. I have the good fortune at the moment of reading Lee Upton’s forthcoming The Tao of Humiliation, winner of the BOA Short Fiction Award, an absolutely gorgeous book I hope finds a huge audience.