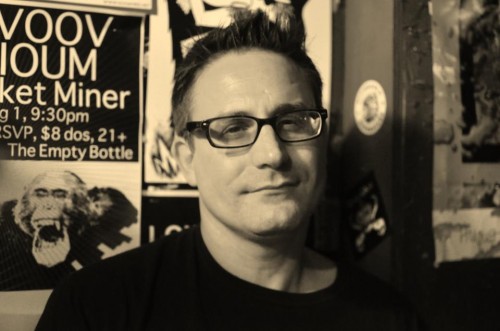 Ben Tanzer is the author of the books My Father’s House, You Can Make Him Like You, So Different Now, Orphans, and Lost in Space, among others. He also oversees day to day operations of This Zine Will Change Your Life, directs Publicity and Content Strategy for Curbside Splendor, and can be found online at This Blog Will Change Your Life, the center of his growing lifestyle empire.

I think literature can change the way a reader lives in terms of the ways they seek the change in the world they desire. For example, The Monkey Wrench Gang by Edward Abbey is endlessly referenced by people who read it and decided their desire to impact environmental change just wasn't hard core enough. That said, I think literature, and the arts in general, are more likely to trigger increased action around beliefs people already hold, as opposed to changing their actual positions. For example, see the reaction to Fahrenheit 911. I also think, however, what is more common, is that the right book, at the right time, can tap into a reader's experience of joy, pain, love, or sadness in ways they may not have had access to previously, and those moments do change lives, because after that you can never quite close those doors again.

Besides one of my own? Because my books make for good presents, really. Well, good presents and great paper weights. But the book I most recently remember giving someone was the quite terrific Fathermucker by Greg Olear, which I gave to my younger brother.

The best advice has been don't edit first drafts until you're done. Get the words out, don't get in the way of them, just write, start to finish, and don't look back. You can edit later.

I may need to unpack this a bit.

I re-read much less frequently than I did when I was younger, but when I did I constantly re-read Jim Carroll, Edgar Rice Burroughs, Kurt Vonnegut, J.D. Salinger, Stephen King, Ray Bradbury, and V.C. Andrews.

Of course, that kind of list is cheating, and I'm sorry about that.

Today, there are so many books I want to read, and much less time to do so, so while I try to read everything I can by authors like Raymond Carver or Andre Dubus, as opposed to say re-reading them, I am more likely to read the writers I know and love personally, who find ways to keep getting published, and force me to be a completist.

So, I'm not re-reading them per se, but I am do try to read everything they write, and those authors include Scott McClanahan, Jason Fisk, Joseph Peterson, Paula Bomer, Mel Bosworth, Barry Graham, Lindsay Hunter, Tom Williams, all small-press wonders, with some of them no longer so small at all.

Which is more cheating. And more sorry on my part.

I'm not much for sentences, or lines, remembering them anyway. I'm more about the feeling I associate with books, but as cliche as it sounds, and as embarrassed as I am to write it, there may be no greater line than this one from Fear and Loathing in Las Vegas:

“We had two bags of grass, seventy-five pellets of mescaline, five sheets of high powered blotter acid, a salt shaker half full of cocaine, and a whole galaxy of multi-colored uppers, downers, screamers, laughers... and also a quart of tequila, a quart of rum, a case of Budweiser, a pint of raw ether and two dozen amyls. Not that we needed all that for the trip, but once you get locked into a serious drug collection, the tendency is to push it as far as you can.”

I remember that line was on the cover of the edition I received as a gift, and not unlike the first time I read The Basketball Diaries my brain sort of exploded when I read it.

Quite boring. I compulsively focus on writing for at least 30 minutes per day every day, wherever I am, and whatever I am doing, on whatever piece of work is important to me that day, nothing precious, no perfect time of day, or place, just write, and if I don't get to write, I don't beat myself up, okay, I do, but only for a little while, and then I get re-focused on making time the next day, and then the one after that.

Yes, and while I can go either way with that, I generally do like to listen to music, and I usually prefer music that is punchy, and sparse, and fast, something like the Ramones, the Beastie Boys, X, Be Your Own Pet, and Jay Z. But there are also songs I will find which fit the mood of a particular book when I'm working on it, and that song can influence the title, “Orphans,” for example, by Beck, which became the title of my last novel, and in those cases I will also play that song again and again the entire time I'm working on that book. With my new collection Lost in Space, I fixated on “Lose Yourself” by Eminem, and though it didn't work its way into the title or text, the rhythm and aspirations seemed right on. 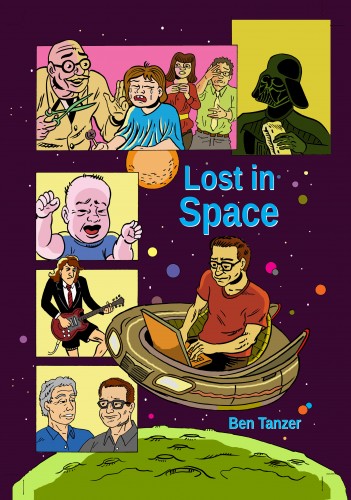 Good question, I love bookstores as much as anything in the physical world. Does that sound dramatic? Don't answer that. Please. But Shakespeare and Company in Paris may be the greatest thing ever created by man, and St. Marks Bookshop in New York City, as well as, Books Inc. in San Francisco, are places I spent a lot of time lingering in when I lived in those cities. I am also partial to The Book Cellar and Quimby's here in Chicago. All of that said however, my first bookstore remains my favorite: Fat Cat Books in Johnson City, NY, a town next to one where I grew-up. Books. Comic books. National Lampoon. Heavy Metal. Everything you could possibly want or need. At the age of 13 anyway.

"Whoa, seriously? Did you lose a bet? And can I take a picture of you? Because my kids are not going to believe this. Oh, and can we hug? Not in a weird way or anything. It's just that I think I'm in love with you."

I think something to that effect is likely.

I get very excited about bars where writers hung out, which is very cliche as well, so sorry about that too. But before I started writing I was always on the look out for those bars, Sloppy Joe's in Key West, Harry's New York Bar in Paris, and the White Horse Tavern in New York City, and I was always hoping to somehow channel, or even steal, some of the writerly energy I assumed still loomed there. I suppose I would like to keep that trend going, and so I will pick the Carousel Bar at the Hotel Monteleone in New Orleans where I will be for work, and a reading, later this month.

No, so no, no interest. As a writer, I think they're great if people use them to read books. and my books in particular. As a reader, I want an actual book to hold. That said, when I travel for work and there are like five novels weighing down my backpack, and the dude next to me on the plane pulls out an e-reader, I do question everything I hold dear for a moment.

If you are an author and treat it as a marketing platform, yes, anything that gets your work out there is good. For everything else, I think it's mostly benign if you use it in small doses, and primarily limit yourself to re-connecting with former high school boyfriends or girlfriends for possible illicit assignations. Not that I do that, I've just heard it might be a thing among other people.

Is that the website where they sell all that stuff? I've heard of it, and it's clearly bad for small business, independent bookstores especially, so, not great, and yet, as an author, moving books is wonderful, much better than one hand clapping for sure, and Amazon definitely encourages that, the moving books part that is, not the silence.

I'm not sure any job was particularly helpful, but being a high school athlete, a runner and wrestler, and even a competitive college ultimate frisbee player, stop laughing please, was certainly helpful. To be competitive and on, all of the time, involves discipline and schedule, a lot of super-focused manic intensity, and the need to ignore outside distractions, all of which is huge for writing.

I'm all compulsion and mania. I've never learned moderation, which if not an actual vice, is certainly an embarrassment, which itself may be a vice, because I cannot escape it, and barely try to do so.

I'm not sure if this is a full-on prejudice, but I am a sucker for attractive people, men or women, it's terrible, and that's not to say I act negatively, or with prejudice, towards someone who is not, I sure hope I don't, but attractiveness, in looks and personality, awesome skin, all of that, and cool, I love cool, can at least temporarily sway me, fairly easily, and in pretty much any direction said person would like me to lean.

It has been a very good year for books, but some of my favorites include We The Animals by Justin Torres, maybe my favorite, Raymond Carver Will Not Raise Our Children by Dave Newman, The Temple of Air by Patricia Ann McNair, MEATY by Samantha Irby, A Deep & Gorgeous Thirst by Hosho McCreesh, Tomorrowland by Joseph Bates, Wheatyard by Pete Anderson, Crapalachia by Scott McClanahan, The Last Good Halloween by Giano Cromley, and Made to Break by D. Foy.

I'm terrible at this kind of question, the naming just one thing of anything question, but if I must, I would like to say moist because I have no idea why so many people hate it, moist makes me think of sex, brownies, and old houses, which are all good things, right? That said, I don't love that word, just the idea of it, so instead I will say fuck, for sure, there is no word better than that.