What’s with all the goomba bling bling? The

announcement of the continuation of the Godfather saga

has so far been greeted with a sound, I imagine, of sheep grazing

in the meadow. (I wouldn’t know that sound, never having been

privy to such rustic entertainment.) The fractious (and admirable)

bunch that scour the infosphere for various tidbits about books,

literature, authors and the assorted craven despots and vulgarians

that exploit them seem to have swallowed without much commentary

Winegardner’s annointment to the Puzo mantle.

Bah! (Is that a sheep sound?) I can remember at

least two instances in which an author’s estate sought further

enrichment by having an unfinished novel completed or just putting

Poodle Springs was said to be a Raymond Chandler novel.

Suffice it to say, it was not a masterpiece or even entertaining

(Parker may even have gone on to write a complete Chandleresque

novel) and Ian Fleming’s name was, I believe, subsumed by

John Gardner. Neither of these instances are high points in literary

What struck me as significant was the lack of discussion

stories), so the underlying motive for the nuevo Godfather

is hardly a mystery. But, I wonder, might this not lead to a new

breed category of publishing? In the past, some authors have tinkered

with updated versions of Mark Twain and other masters (there seem

to be frequent attempts to update various Shakespearean dramas).

I for one wondered what happened to Catch 22's Yossarian.

There are many other stories (that their creators wisely left as

may still call them that).

Two of the names mentioned as contenders in the

wrote the novel that the wonderful movie Pope of Greenwich Village

for movies. His novel Smokescreen was a readable thriller

based on various secret agency type shenanigans with archenemy Fidel

Castro. The other name mentioned, James Carlos Blake has written

The Pistoleer: A Novel of John Wesley Hardin, In the Rogue Blood,

The Friends of Pancho Villa and A World of Thieves.

compassion of James Lee Burke and the dark vision of Cormac McCarthy.

Anyway, I am glad for the talented Mark Winegardner,

the fine writing he is already producing. And who knows, the possibility,

of course exists that he will turn out something wonderful and remarkable. 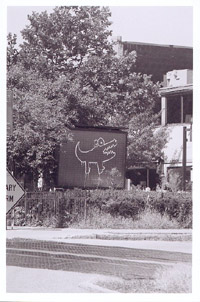 The Crocodile by Robert Birnbaum