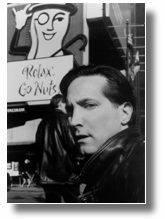 Andy Behrman is the author of Electroboy: A Memoir of Mania (Random House, 2002), which is a nonfiction account of his adventures and struggles with manic depression and electroshock therapy.

In the words of the author's
website, "Electroboy is about living life at breakneck
speed. He hopped on flights from New York to Tokyo and Paris at
a moment's notice, spent $25,000 without a bit of thought on a huge
shopping spree and stayed awake nights exploring the underworld
of nightlife in Manhattan or whatever city he happened to be visiting,
in search of the perfect high. But when Electroboy turned to art
forgery, he found himself the subject of a scandal lapped up by
the New York media, then in jail, then under house arrest. And for
once he didn't have a ready escape hatch from his unraveling life.
Ingesting handfuls of antidepressants and tranquilizers, feeling
his mind lose traction, he decided to opt for ECT. He underwent
nineteen electroshock treatments over the course of about a year
and a half."

Andy Behrman is now living a far less manic life in Los Angeles,
working on a screenplay as well as a sequel to his first book. Meanwhile,
Electroboy is being adapted into a major motion picture
with Tobey Maguire. Look for it in theaters next
summer.

How can someone tell if they suffer from manic depression?
What is it, exactly?

MANIC DEPRESSION IS A MOOD DISORDER CHARACTERIZED BY SEVERE HIGHS
AND LOWS. SOME OF THE SYMPTOMS ARE PRETTY APPARENT - - RACING THOUGHTS,
LACK OF SLEEP, EXCESSIVE SPENDING, HYPERSEXUALITY, OVERINDULGENCE
IN ALCOHOL AND DRUGS AND RISK TAKING BEHAVIOR.

Why do you think it was difficult for you to get an accurate
diagnosis of your manic depression?

IN 1980, DOCTORS KNEW MUCH LESS ABOUT DIAGNOSING PATIENTS WITH
MANIC DEPRESSION. IT WAS BARELY IN THE "VOCABULARY." LATER
ON, IN THE 1990'S, DIAGNOSIS WAS DIFFICULT BECAUSE I WOULD ONLY
GO TO PSYCHIATRISTS IN MY "DOWN" MODE (NOT WHIILE I WAS
MANIC), AND DOCTORS CONCLUDED THAT I WAS DEPRESSED.

How do you account for the increase in young people being
diagnosed with manic depression and similar illnesses? Is it a cultural
thing, or are we simply more aware of the existence of these disorders?

WE'RE MUCH MORE AWARE OF MANIC DEPRESSION AND PARENTS OF YOUNG
CHILDREN PAY MORE ATTENTION TO THEIR CHILDREN'S BEHAVIOR. ALSO,
DOCTORS KNOW HOW TO DETECT AND DIAGNOSE AT AN EARLIER AGE.

Is electroshock therapy a common treatment for manic depression?

YES, ECT IS OFTEN USED TO TREAT MANIC DEPRESSIVES WHO ARE UNSUCCESSFUL
WITH MEDICATION.

In an article for New York Times Magazine, you
wrote that you “actually started to love” your electroshock
treatment. Why was the experience appealing to you?

IT WAS APPEALING TO ME FOR TWO REASONS. ONE, IT WAS LIKE YOGA OR
TAI CHI AND I FELT LIKE IT KEPT ME BALANCED. AND THE OTHER REASON
WAS NOT A HEALTHY ONE - - I WAS ADDICTED TO THE PRE-MEDICATION OF
THE PROCESS.

You’ve been through a lot of different mood-controlling
prescriptions. What is your perception of their effectiveness?

DIFFERENT MEDICATIONS WORK DIFFERENTLY FOR PEOPLE. BUT TODAY, THERE
ARE SO MANY WONDERFUL MEDICATIONS THAT WE DIDN'T EVEN HAVE FIVE
YEARS AGO. FIFTEEN YEARS AGO, ALL WE HAD WAS LITHIUM.

Have you tried other treatments for manic depression aside
from medication and electroshock therapy?

At what point did you decide that you wanted to write a
memoir? Why did you write it?

I THOUGHT ABOUT WRITING A MEMOIR WHILE I WAS RECUPERATING FROM THE
MEMORY LOSS FROM THE ECT. I JUST FELT LIKE I HAD NEVER READ A REALLY
TRUTHFUL ACCOUNT OF MANIC DEPRESSION AND NEVER READ ANYTHING FROM
A MAN'S PERSPECTIVE.

Have you heard from readers who have suffered from similar
mental illness? What has been the response?

I'VE HEARD FROM MORE THAN 15,000 READERS AND VISITORS TO WWW.ELECTROBOY.COM.
ALMOST 99.99% OF THE PEOPLE WHO WRITE TO ME ARE SO HAPPY THAT I
"CAME CLEAN" AND TOLD THE WHOLE TRUTH ABOUT MANIC DEPRESSION,
ALTHOUGH SOME DID HAVE PROBLEMS THAT IT WAS SO "RAW AND GRITTY."
BUT IT TOOK AWAY A LOT OF SHAME FOR A LOT OF PEOPLE WHO HAD BEEN
QUIET ABOUT THEIR ILLNESS FOR SO MANY YEARS.

A significant portion of your book involves your Mark Kostabi forgery
ordeal. What became of Mark Kostabi and Kostabi World? Do you still
have contact with anyone from that scene?

I'VE NEVER SEEN OR SPOKEN TO MARK
KOSTABI SINCE MY TRIAL IN DECEMBER OF 1993, WHICH IS MORE THAN
TEN YEARS AGO. I'VE HEARD THAT HE LIVES IN ROME AND CONTINUES TO
HAVE OTHER PAINTERS PAINT HIS WORKS (HE CONTINUES TO SIGN THEM),
BUT THE VALUE OF HIS PAINTINGS HAS PLUMMETED. CANVASES THAT WERE
ONCE WORTH $20,000 SELL FOR $2,000 TODAY.

There seems to be an obvious connection between your manic depression
and your creative impulses towards writing and filmmaking. How do
you plan on using these impulses in the future?

I THINK THAT'S AN ASSUMPTION. I'M EVEN-KEELED TODAY AND DON'T EXPERIENCE
MOOD SWINGS - - NO HIGHS THAT PLUNGE ME INTO PERIODS OF 72 HOUR
SPURTS OF CREATIVITY. BUT I REMAIN CREATIVE. THAT'S JUST PART OF
MY MAKE UP. I'M CURRENTLY WORKING ON THE SEQUEL TO "ELECTROBOY"
AND ON A SCREENPLAY THAT IS NOT CONNECTED TO THE BOOK.

Given your background in filmmaking, are there plans to
make Electroboy into a movie?

THE FILM HAS BEEN OPTIONED AND IS CURRENTLY IN DEVELOPMENT. TOBEY
MAGUIRE ("SPIDERMAN" AND "SEABISCUIT") IS ONE
OF THE CO-PRODUCERS AS IS MY WIFE, JULIA EISENMAN OF ENDGAME ENTERTAINMENT
(WHICH IS HOW WE MET MORE THAN TWO YEARS AGO WHEN SHE WAS INTERESTED
IN ACQUIRING THE RIGHTS TO MY STORY). HOPEFULLY, THE FILM WILL GO
INTO PRODUCTION AT THE END OF THE SUMMER.

When I first saw your author photo, I thought you looked
exactly like Andrew McCarthy. You once mentioned having a vision
of Andrew McCarthy playing you in a movie. Have you talked to him
at all about getting involved in the Electroboy movie?

DO I REALLY LOOK THAT MUCH LIKE ANDREW MCCARTHY? THE COMMENT I
MADE ABOUT ANDREW MCCARTHY WAS JUST AN OFF HAND COMMENT I MADE TO
"NEW YORK MAGAZINE." TOBEY MAGUIRE IS SLATED TO PLAY THE
ROLE AND I'M THRILLED WITH THAT.

Your memoir details your background in book publicity.
How did the experience of promoting other people’s books help
when it came time to get word out about your own book?

IT CAME IN HANDY. I HAD PROMOTED MORE THAN THIRTY BESTSELLERS IN
MY CAREER AND I KNEW EXACTLY HOW TO PROMOTE AND MARKET THE BOOK.
I HANDLED ALL OF THE PUBLICITY FOR "ELECTROBOY."

We have a lot of first-time and under-publicized authors
reading the site. What advice would you give them on getting people
to notice their books?

SCREAM AND JUMP UP AND DOWN ABOUT YOUR BOOK. SEND OUT SMOKE SIGNALS.
DO EVERYTHING EXCEPT TAKE YOUR CLOTHES OFF IN PUBLIC PLACES. HONESTLY,
USE THE INTERNET, RADIO, NEWSPAPER AND TV. GET CLOSE TO BOOK CLUBS
-- THEY REALLY READ. LET PEOPLE KNOW WHY YOUR BOOK IS "DIFFERENT"
AND WHY IT'S WORTH "THE BUY."