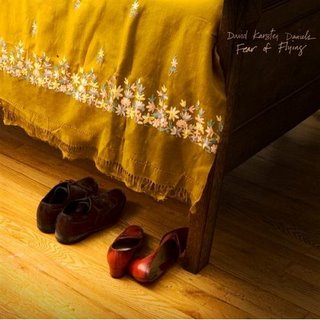 During the months of writing and recording Fear of Flying

, I imagine that there was a copy of Elisabeth Kubler-Ross' On Death and Dying, and a Bible, complete with ink-smudged family tree frontispiece, sitting on David Karsten Daniels' bedside table. Daniels' fifth album, home recorded like all of his previous efforts, is a collection of intimate conversations and emotional rumblings about the cycles of life and death, and the ever-presence of physical and relational deterioration. Fear of Flying, Daniels' second release on Fat Cat Records, is an album of raw immediacy and delicate exploration. The most poignant, emotionally rich tracks ("Wheelchairs," "In My Child Mind You Were a Lion," "Evensong") highlight Daniels' gently ragged vocals--somewhat of an Oldham-esque acquired taste--accompanied by a nylon string guitar or the gentle sounds of the natural environment. The less contemplative, but equally rich, tracks such as "Martha Ann" and "That Knot Unties?" feature a rotating cast of characters from Chapel Hill's Bu Hanan Collective (Daniel Hart, Perry Wright, John Ribo, and others) who dramatically step in and then quickly make an exit, leaving Daniels' lonesome voice to re-emerge as the centerpiece and emotional heart of the album.

The album's opening track "Wheelchairs," and the later "The Caretaker," show us harrowing portraits of youth attending old age and decay, plagued with questions concerning their own mortality. "Wheelchairs" ends with a beautiful yet limited vision: "And if we look out to sea/ the curve of the earth only lets us see/ a few miles off." This admission of curiosity and fear concerning the great beyond, this deeply human "fear of flying," is echoed throughout the album. Each song is a different response to the questions of death and aging, from confusion ("That Knot Unties?") to denial ("Falling Down") to flippancy ("Oh, Heaven Isn't Real") to faith ("Evensong").

"That Knot Unties?" picks up the pace as the questions intensify: "When you close your eyes, will you step into the skies?" The song begins with a somber, pulsing beat and builds momentum as additional vocals and instruments (saxophone, banjo) layer to a thematic and musical climax. The most distinct instrument, however, is Daniels' own pure, piercing voice. The album's first single, "Martha Ann," is infectiously catchy, albeit without a traditional verse-chorus structure, exemplifying Daniels' flair for nontraditional composition. "In My Child Mind You Were a Lion," a portrait of a declining patriarch whose children are his "subjects" who sing his "praises," again succeeds on the strength of Daniels' vocals, swelling from an exhausted murmur to an open-mouthed moan. The album closes with "Evensong," a delicate musical recitation of "The Lord's Prayer" which is, ironically, another portrait of a father whose praises are being sung. Here, Daniels' soothing voice is accompanied only by a chorus of cicadas, a solitary guitar, and the faint, stirring entry of strings towards the song's end.

Fear of Flying is an intense musical exploration of life's hardest questions. Daniels does not rely on catchy gimmicks to quickly gain our attention. The delicacy and emotional weight of these songs demand our time, our patience. They are more than worth it.