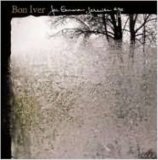 Bon Iver
For Emma, Forever Ago

Two years ago, Justin Vernon spent the winter alone in his father's Wisconsin cabin, wrestling with the ghosts of past relationships and his former self. Following a split with his band DeYarmond Edison and having moved cross-country from North Carolina, Vernon's only plans were to cocoon himself away for three months in the remote woods. He planned to split wood, drive a tractor, make time for self-reflection. For Emma, Forever Ago, the musical result of Vernon's cabin experience, was recorded under the moniker Bon Iver, an intentional misspelling of "good winter" in French. The album suggests a renewal, like a spiritual cleansing in a Native American sweat lodge. As the snow melted around Vernon's cabin, it sounds as if certain emotional and mental boundaries also melted, or were sweated, away.

Vernon's music is full of beautiful contradictions: cold yet warm, sparse yet rich, isolated yet full. The unlikely couplings of these contradictions provide the texture of the music, saving it from monotony. Varied bursts of energetic strumming and syncopated percussion are juxtaposed with open spaces of silence and faint Gregorian echoes.

The collection of songs begins simply enough with an acoustic strum and the soaring, soulful falsetto of "Flume." Multi-layered vocals reflect upon the slipperiness of loving, which is likened to "gluey feathers on a flume." In the collection's punchiest piece, "Skinny Love," what begins as soulful crooning soon gains angry energy as both the vocals and frenetic strumming threaten to reach a breaking point. The contrast of frenzied warmth and cool open spaces intensifies in the mock gospel sounds of "The Wolves (Act I and II)." Although the ascending harmonies seem to reflect a sense of religious hope, Vernon cleverly sings "swing wide your crane," not finding comfort in the low swinging chariot of spiritual salvation. Rather he seeks solace in the knowledge that he has been destroyed by another's violent, wide strokes. The album ends with the most subdued yet weighty track, "re:Stacks," the delicate song of a man who recognizes his faults and needs only after an interior "excavation" and the cleansing of "pouring rain."

Vernon's stripped-down folk stylings have been compared to Iron & Wine and his penetrating voice to TV on the Radio's Tunde Adebimpe. Yet there is clearly something unique in this blend of warm, raw vocals and clean, clear, yet edgy instrumentation. For Emma, Forever Ago does not fall prey to common self-indulgences and maintains a purity with its under-production, as if untainted by outside forces. As Vernon moves from chaos to calm, from anger to contentment, he succeeds in making something haunting and believable.