After recently bemoaning the declining quality of

films these days with no less an enthusiast than David Thomson—he, of the glorious Biographical Dictionary

of Film (4th edition)—I have been thinking a bit about

the relationship of movies and books over a range of, uh, issues.

In early December PW published a short q & a with pseudonymously

in Hollywood. Here’s the question posed to him:

How would you describe the book and the film industries

Unfortunately I think one is becoming more and

more like the other. There was a time when the book industry and

the film industry were totally separate entities. Not only in

More and more you see the book industry mimicking the business

produced and how it’s put out there for the audience. In

terms of what a viable product is and what it is not. There was

it published were pretty good, and I think that is less and less

true because, again, the book industry emulated the film industry

as opposed you one that has literary merit.

That this is sad and bad—well, I think that’s

pretty obvious. That it is new news is puzzling. For a few years

cut deals with publishing houses or editors have made their magic

they make. I vaguely remember the inestimable Joan Didion excoriating

the art of the deal which these days may be the main art. Let me

is a Headline for an Essay About Meta," also, a few months

ago. I am still pondering what alchemical process Ms. Miller employed

to turn a simple idea into a 3700-word revenue source (on that count,

yeah for her) or more honestly what exactly the point was. I’ll

get back to that soon and, if not there is always my tell-all memoir

(where I name names and give dates) It’s All Good.

So as the kids say, “Oyez perro.” Reading

my local shopping and eating magazine, Boston magazine, I

noticed that Rob Reiner’s next film Alex and Emma is

based on Dostoyevsky’s The Gambler, a story about a

writer who has problems—like writer’s block (which is

And then there is Adaptation, which may be the exemplar of

to take a book, in this case, 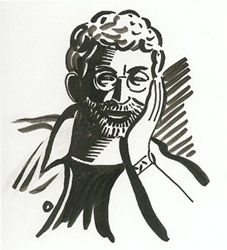