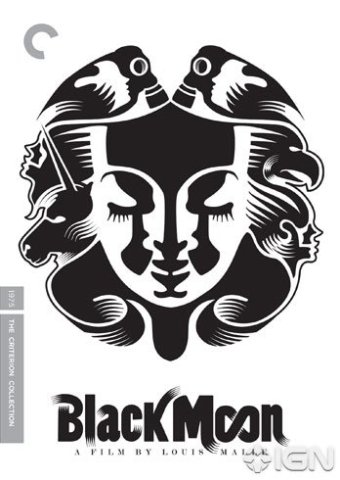 A Fellini moment was due for a journeyman director like Louis Malle. He began his feature work in '58 France, right when a revolution was growing, with the giddy, clever noir piece Elevator to the Gallows, and would later leave an aesthetic mark with personal yet universal tales of youth Murmur of the Heart, Lacombe, Lucien, and Au Revoir Les Enfants. His dedication to his homeland didn't stop him from working in the States, as less a visitor than an artist in tune with his subject. His stateside character studies Pretty Baby and Atlantic City are about place (New Orleans, for the former) as much as My Dinner with Andre is about the mind as it opens during personal exploration via conversation.

The Criterion Collection now brings us back to Malle's mid-seventies oddball, Black Moon. The film is so intent on straying from its auteur's brethen that is gets lost. Malle seemed flexible when he stayed natural, but strained during calculated invention. Granted, he did base this film on a dream – and tried to adapt that logic. We see little of his clarity of image and emotion in his usual poetic realism as he grasps for the surreal in Black Moon.

The issue could be that Malle was never one for the symbolic. He worked better in realistic environs, where slight metonymy would serve. In the latter case, we see Malle working with intuition, as when an elevator shaft becomes a literal trap as well as a ticking clock for the principal character in his debut film. Intuition for symbolism is something that grew naturally for surrealist David Lynch. He too shot for the symbolic in his early short, The Grandmother, whose nightmarish imagery represents subjective mood more than insight. In Mulholland Dr., the visualize dream thoughts run in a tight narrative, making it a suspense story on its own as much as a character's unconscious state during one.

Malle's surreal attempt, in contrast, is all stops and starts. The film begins with a shot of a porcupine crossing a road, which a young woman runs over. She soon finds herself in some kind of battle zone, the enemy possibly targeting the repressed. It first seems that women comprise one of the enemy's targets, a threat becoming clear when Lily (Cathryn Harrison) gets pulled over, her long hair revealed. But then again, perhaps long hair, and not female soldiers, is the prohibition. In a line-up, one of the seemingly female soldiers looks like a man. Naturally, the answer hardly matters, as Malle aims for us to ponder more than interpret. Yet, pondering is tough when symbolic reference seems confused on its own, aside from the viewer's confusion.

Lily soon finds herself at a countryside homestead, ordinary on the surface but – like the Freudian consciousness that this film dotes on – screwy underneath. Lying in bed, a matriarch seems to be ailing until she deploys threats both clear and unintelligible (at times via a radio signal) and, in a turn of phantasmagoria, needs breastfeeding. (The casting of Warhol beefcake Joe Dallesandro is another such turn.) In an obvious riff on Alice in Wonderland, Malle attempts to bring out the maturity/sexual anxiety that many think buried in Carroll's text, though the signals – Lily's panties repeatedly falling and her move to offer her breast to the matriarch – feel weird for its own sake. A growing pack of naked children only stresses the matter, especially when they attack Lily in an illogically innocent and menacing move. I'm sure Malle felt he was shocking viewers from complacency, though fans for such a film need insight more than sundry freakout moments.