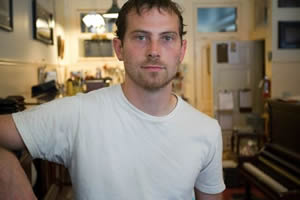 Computers. They have had such an enormous impact on all aspects of music that it is hard to imagine what things would be now without them. Not only have they opened up a whole new world of sonic possibilities, they have also leveled things out, making it possible for people to make professional recordings without having to be funded by a major label. And then, computers have also helped these same recordings get distributed past the mainstream, which has allowed for the greater success of independent labels and artists. And I suppose that this means that music is expanding and fragmenting into all of these amazing things. It is scary and beautiful.

Well, some things haven't changed at all. I still value music for mainly the same reason I did when I was young, the way it made me feel. But, once I started making it, I wanted to explore it, and stretch it out away from what I heard before. So I have this kind of conflict that comes from being young, wanting to make something earthbound and comfortable, and now that I am older, simultaneously wanting to make something new.

I would like to think so, but then again everyone carries around their own little vision of the world, so everyone is going to hear it a little bit differently. Sometimes I like to think that music can transcend that. I think that is when it is really good.

5. How do you approach live music differently from recorded music?

A lot of what I have done is based on computer manipulation of recorded instruments and sounds, so it has been a challenge to bring this into the live environment. Ideally I would have a few player pianos and a lot of outboard effects on stage. But, this isn't feasible right now, so instead I use my computer along with a handful of other instruments and pedals. I like to do more than just sit there behind the laptop, because for me, that feels too static in a live situation. So I end up trying to recreate some of my studio process in a live scenario.

6. What has been one the most important non-musical influences for you as an artist?

Moving Image. That is an easy one for me, 'cause I have been interested in combining these mediums for a while now. When I play live, I often perform with a film of imagery from player pianos and music boxes that have been sourced and manipulated in a similar fashion to the music. I can play off the film while it runs, and this helps create an environment, like bridging live performance with art installation, and I like that idea.

7. Where do you draw the line between music and non-music?

Better not to draw lines, unless you're trying to make pictures.

8. If people used music as currency, what would a large pizza cost?

Music as currency. Well, if we are talking about hours spent...that could be complicated...I got some pizza once for playing a show. It was great, I love pizza.

9. What is your most productive time of day for writing music?

That changes with the season. Sometimes at night, sometimes in the afternoon, but right now I have been working a lot on music in the morning. For a lot of years I kind of forgot morning existed, so I have just recently rediscovered it. It is good because the world is quiet, and time can feel like it has stopped. Lots of space to fill.

10. Please rank these four musical adjectives in terms of the importance you place on them:

After trying several permutations, I have to go with all of the above. I just can't put a hierarchy on them. You see I have this internal conflict from when I was young...(see question 3).

11. What percentage of your musical ideas would you say end up coming to fruition?

I would say close to 100 percent I guess, because I let so much of the composition happen in the process. I come into it with some simple ideas of where I want it to go, and then I let it run its course. I often feel like a passenger.

12. What is the ideal circumstance for someone to hear your music?

Laying down and looking up. Or live. Or both.

13. Would you say that your most recent music represents more of a new direction for you, or a continued development of the same general aesthetic?

I would say that my solo work has been a development of aesthetic. I started with doing short run releases on Locust. One with music boxes and one with player pianos. With both of those I applied the same sort of concepts, using old machines for new sounds. And then I took that and expanded it into Ceiling Songs. Right now I'm working on a piece which will probably be another short run. I made a recording of the only automated carillon in the United States. It's basically a giant music box of church bells. And now I'm breaking that into a new song. I'm excited to see where the future takes me.