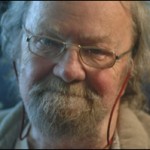 Today is poet, writer, and editor Donald Hall's 85th birthday. The first poetry editor of The Paris Review, Hall has written more than 20 books of poetry. He served a one-year term as Poet Laureate of the United States beginning in October 2006 and was awarded the National Medal of Arts in 2010. He lives in Wilmot, New Hampshire.

Below are ten quotes selected from Donald Hall's poetry and interviews.

"We are all dying
of something, always,
but our degrees of
awareness differ"

"Life is hell but death is worse."

"I want to sleep like the birds
then wake to write you again
without hope that you read me."

"When I was nineteen,
I told a thirty-
year-old man what a
fool I had been when
I was seventeen.
'We were always,' he
said glancing down, 'a
fool two years ago.'"

"Let us stifle under mud at the pond's edge
and affirm that it is fitting
and delicious to lose everything."

"At the beginning, my poems had nothing to do with me, almost all of them. As my life has gone on, one thing I’ve said is I began writing fully clothed and I took off my clothes bit by bit. Now I’m writing naked."

"Poetry has always come first, simply because I love poetry more than anything else. It's what I want to be best at, and I hope I am. Some days I feel good about my work, and sometimes I feel I've never written anything worthwhile. That's par for the course."

"We have no reviewers. There is no regular reviewer of poetry in the United States whom I respect."

"The desire must be, not to write another dozen poems, but to write something as good as the poems that originally brought you to love the art. It’s the only sensible reason for writing poems. You’ve got to keep your eye on what you care about: to write a poem that stands up with Walt Whitman or Andrew Marvell."

"My advice to young poets is pretty standard—read the old people. Read the 17th century. Don’t just read 20th century. Sometimes you get the impression that people think that poetry began in 1984 or something. And read the old boys and revise. Revise endlessly."